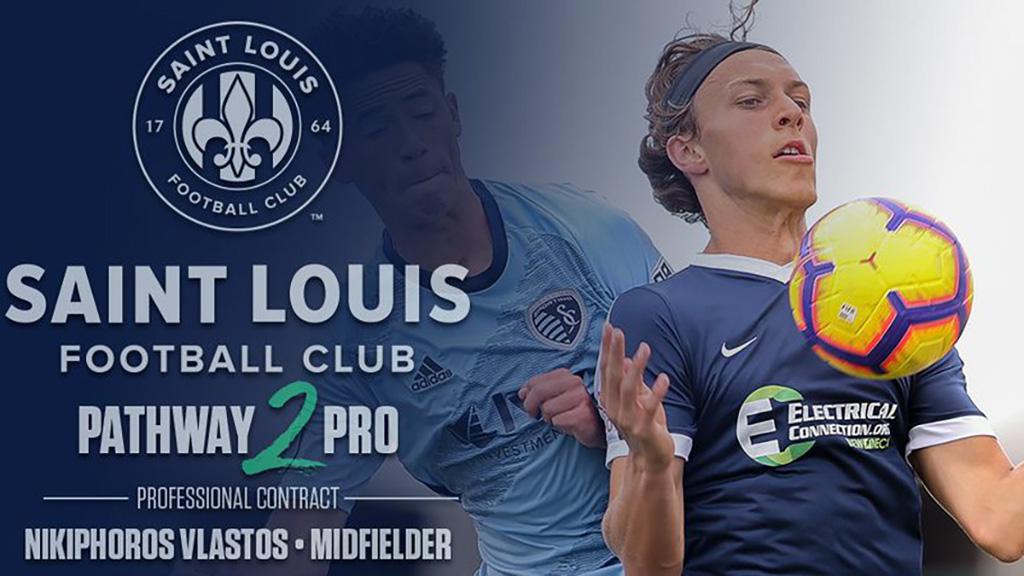 “Nichi has earned this pro contract through his level of training with the first-team, his level of play with the U19s, and more importantly his mentality with both groups to remain consistent,” said STLFC Head Coach Anthony Pulis. “This is another positive step for our club to show that the pathway from Academy to First Team is real if players apply themselves every day in training and in every game. Age is not a factor for me, if players are good enough and earn it, they will be given opportunities.”

Vlastos was born in Casper, Wyoming and joined the club in 2015 as a 15-year-old where he spent time between the U15 and U17 Academy teams. He started to train with Saint Louis FC in 2017 while also playing for the STLFC Academy U19 team, where he scored three goals in 21 appearances in U.S. Soccer Development Academy competitions. This Academy season, Vlastos played in 29 games and scored two goals as the U19 team finished in third place in the USSDA Playoffs.

“Nichi had a great year with our U19s where he made a big impact in our team during the whole season,” said STLFC Academy U19 Coach Luis Swisher. “He demonstrated a lot of individual qualities that not only helped us in every game, but also helped himself to have more opportunities with the first-team. He is a great player with huge talent and strong personality, and he is really focused on reaching his goals which include playing at the highest level.”

Vlastos signed an Academy contract at the start of the 2019 USL Championship season after spending time with the Championship club during the 2017 season. He made his professional debut in the Lamar Hunt U.S. Open Cup against Des Moines Menace (USL League Two) where he played all 120+ minutes in the penalty shootout win. Vlastos then made his debut in the Championship on July 13th as he was substituted on against Charlotte Independence and played 16 minutes, completing 17 of 19 passes and recording one key pass.

“Nichi is the perfect example of the reality that development rarely occurs in a straight line,” said STLFC Academy Director Blake Decker. “You could look at his involvement with the First Team this season and say his trajectory has occurred along a straight line from preseason matches, to Open Cup debut, to his league debut. However, that does not tell the full story of a young man, who as a 16-year-old was in the First Team environment playing in several preseason matches and looking promising, to a player who found himself outside the environment for nearly 18 months and watching other players getting opportunities.

“Then, he not only worked his way back into the First Team as an Academy contract player, but then secured his first professional contract at 19 years-old. We are extremely proud of Nichi and recognize him for his determination. We are also appreciative of the door he is opening for a future, yet unknown player in our Academy who is currently watching him to see what is possible if you believe in yourself and trust the process.”

“I want to thank my mom, dad and brother for their unwavering support since I first touched a ball,” said Vlastos. “Also thanks to the rest of my family, friends, previous coaches, and teammates back in Casper, Wyoming for always pushing me to be the best player I can be. Finally, thanks to the club and coaching staff for giving me this incredible opportunity to continue my career at such an exceptional place. From the best fans in the league to a phenomenal training environment day-in and day-out, I could not ask for a better place to grow.”