TAMPA, Fla. – Bethlehem Steel FC goalkeeper Tomas Romero has been voted the USL Championship Player of the Week for Week 20 of the 2019 season. Romero recorded an 11-save shutout in Steel FC’s 1-0 victory against Louisville City FC, tying the Championship record for the most saves in a shutout in the league’s history, to lead his side to a crucial victory in its bid for a postseason berth. 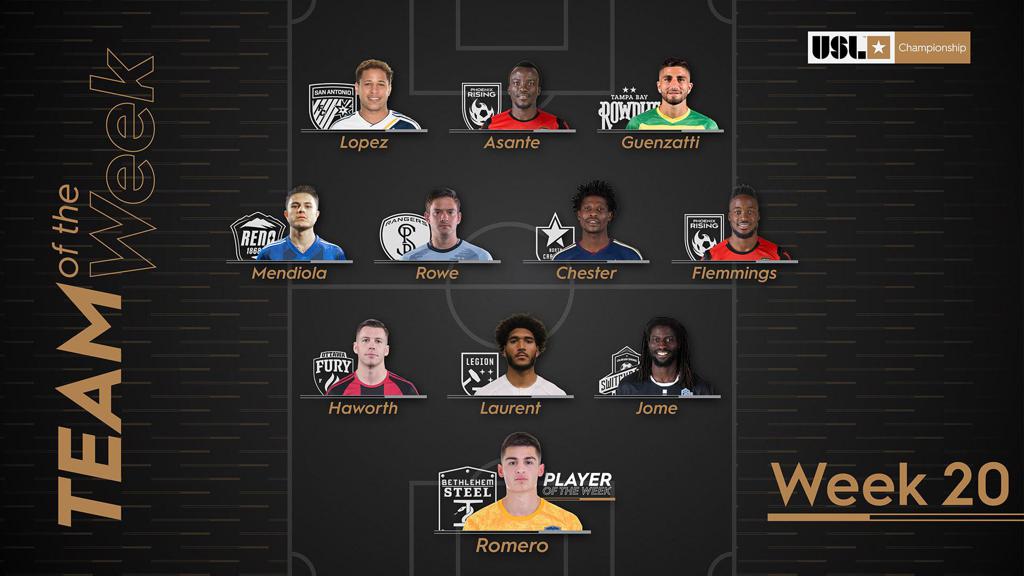 GK – Tomas Romero, Bethlehem Steel FC: Romero recorded an 11-save shutout – tied for the most saves in a shutout in Championship history – as Steel FC defeated Louisville City FC 1-0 at Slugger Field.

D – Carl Haworth, Ottawa Fury FC: Haworth had a goal and assist, made three key passes and won 14 of 17 duels in Fury FC’s 4-0 victory against the Swope Park Rangers at TD Place.

D – Mathieu Laurent, Birmingham Legion FC: Laurent won 6 of 7 duels and made 10 recoveries while also finding the back of the net in Legion FC’s 4-0 victory against ATL UTD 2.

M – Kelyn Rowe, Swope Park Rangers: Rowe scored a pair of goals, completed 34 of 41 passes and 2 of 3 dribbles and made three recoveries in Swope Park’s 4-3 win against Hartford Athletic.

M – Yamikani Chester, North Carolina FC: Chester made a major impact after coming on as a halftime substitute, scoring a pair of goals on four shots overall while completing 16 of 19 passes.

F – Frank Lopez, San Antonio FC: Lopez immediately made himself at home with San Antonio, scoring twice on his debut for the club in a 3-1 Copa Tejas victory against El Paso Locomotive FC last Wednesday night.