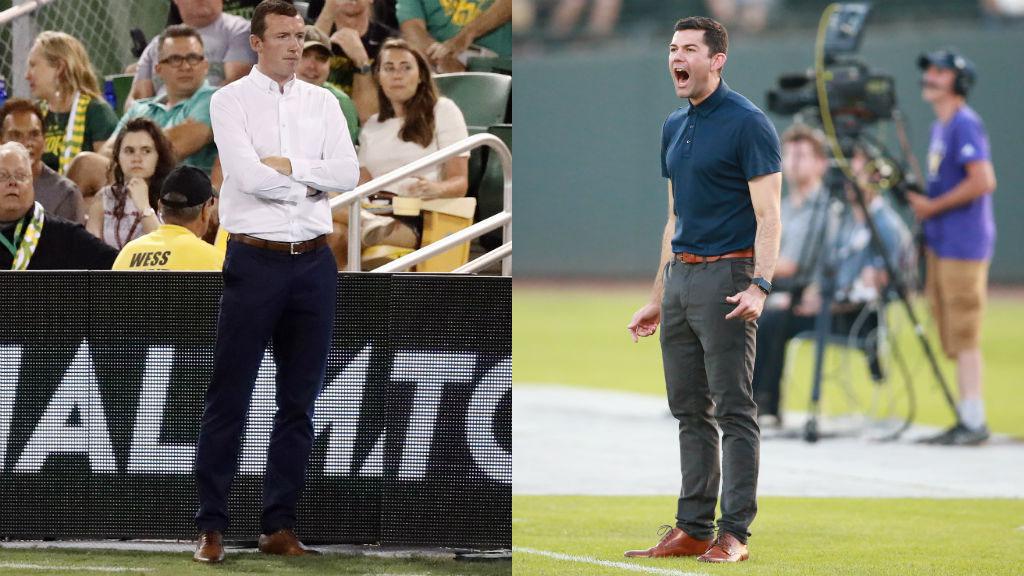 Tampa Bay Rowdies Head Coach Neill Collins (left) and Saint Louis FC Head Coach Anthony Pulis (right) have made impressive transitions from the playing field to the touchline in the USL Championship over the past few years.

SAINT PETERSBURG, Fla. – When the Tampa Bay Rowdies last welcomed Saint Louis FC to Al Lang Stadium in May 2017, Neill Collins headed home a corner kick in the 87th minute to rescue a point for the hosts in a 1-1 draw.

A lot has changed for the Scottish center back since then.

Collins has spent the past 14 months as the Rowdies Head Coach, having hung up his playing boots to transition into the full-time role in a 24-hour span last May, a move that he describes as a “complete and utter whirlwind.”

“I played in the Wednesday night [match] and then I got a phone call after that game,” Collins said in an interview earlier this week. “I still didn’t think I was necessarily going to get the job, I thought maybe potentially in a short-term capacity and then it quickly turned into Thursday at 5 o’clock I’m addressing the staff and the team as the new Head Coach, which was surreal.”

Much like the way the move was handled by former Rowdies Owner Bill Edwards, Collins’ transition from player to coach wasn’t exactly the smoothest.

The squad he adopted was one of the oldest in the USL Championship and had just forced one of its starting center backs into retirement. The roster only thinned from there as Marcel Schäfer left the club in June to take over as the Sporting Director at German club VfL Wolfsburg and two other players were released in July because of an off-field altercation.

After having high hopes heading into the season, the Rowdies finished the campaign in 12th place in the Eastern Conference – eight points out of a playoff spot – and had a losing record (7-10-8) under Collins.

“It was a real baptism by fire, but I’ll tell you what, it put me in really good stead.” Collins said. “It made me learn quickly and it accelerated our decision-making.

That may be a bit of an understatement as the new-look Rowdies (11-1-7, 40pts) have been buoyed by their youth and athleticism all the way to the top of the Championship standings at the midway point of the season.

The offseason signings of 22-year-old forward Juan Tejada (seven goals) and 23-year-old midfielder Andrew Tinari (three goals, four assists) have already begun to pay dividends and Collins has dipped into the loan market to find key pieces as well. Defender Caleb Richards, 20, has started every game of the season at right back after joining from Tampa Bay club partner Norwich City FC and midfielder Jordan Doherty, 18, has made 11 appearances on loan from Collins’ former club Sheffield United FC. 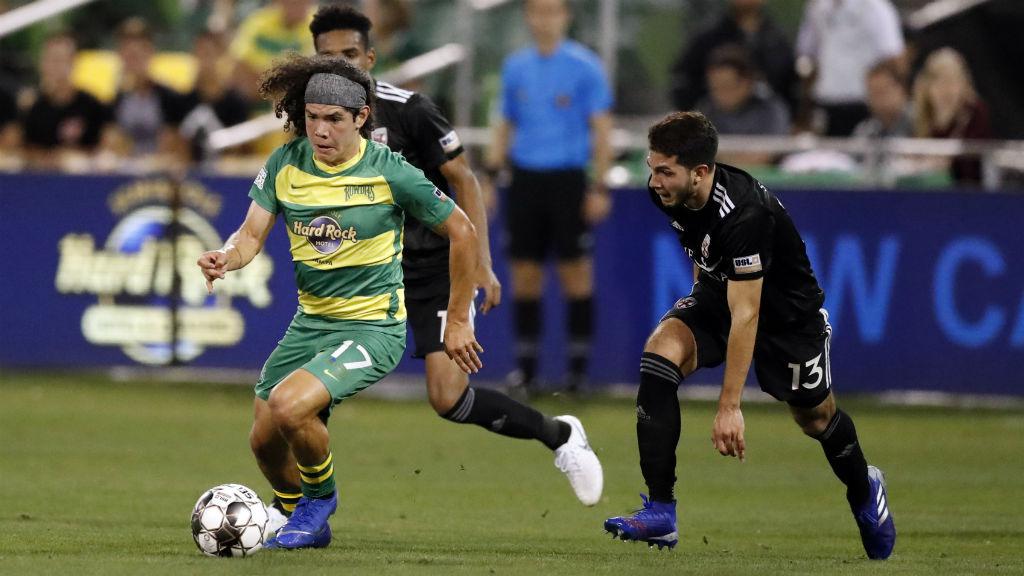 Tampa Bay Rowdies forward Juan Tejada has made an impressive start to his first season with the Rowdies, netting seven goal so far this campaign. | Photo courtesy Matt May / Tampa Bay Rowdies

“We certainly tried to prepare as best we possibly could and right now, we’ve kind of reaped the rewards of that,” said Collins. “But again, you don’t really judge how good your offseason was until the end of the next season, so I think the good thing is we all know that we’re on the right path.”

Another team that is certainly on the right path is Tampa Bay’s Saturday opponent, Saint Louis FC.

Pulis believes that much of the team’s success over the past year and a half derives from the culture that he has worked endlessly – through both recruiting and training – to create at the club.

“I’m a big believer in having good people with good values, with good work ethic, with good mentality,” Pulis said in a phone interview this week. “People that understand that the team comes first and have got a we not me mindset, where again the team comes before everything. And ultimately, a hunger to want to get better and want to improve. I think as a coach you can’t ask for anymore.”

Pulis couldn’t have asked for much more from his side during its Open Cup run, which featured a 2-1 victory over the Chicago Fire and a dramatic 1-0 win over former Championship rival FC Cincinnati before meeting its end against 2018 MLS Cup champion Atlanta United FC.

MORE: MURRAY - Open Cup Runs May be Over, but NMU, STLFC Brought Magic

While those showcases were what Pulis called “an emotional roller coaster”, they also coexisted with a dip in Saint Louis’ league form that has seen the side slip from near Tampa Bay at the top of the table to 19 points and 10 places behind the Rowdies entering Saturday’s showdown.

Some of those results were certainly a product of a busier schedule – as fellow Quarterfinalist New Mexico United has seen in the Western Conference – but Pulis knows at the end of the day that he’s always going to be judged by his record.

“Ultimately as a professional coach, you have to find ways to win because that’s what we’re judged on,” said Pulis. “And that is at times frustrating because, as a Head Coach, I’m defined from the outside by the results that my team gets not necessarily our process, how we play or what my beliefs are.”

As the son of long-time English Premier League Manager Tony Pulis, that’s a reality that the 34-year-old has understood from an early age.

Anthony, who like Collins spent most of his playing career in the U.K. before capping it off in the Championship with Orlando City SC, says his father was also a helpful role model in making the move from player to coach, with Tony having made over 300 appearances as a defender before transitioning to the touchline.

The younger Pulis played three seasons in Orlando, claiming two regular-season titles and the 2013 USL Cup with the club but also began coaching 11-, 12- and 13-year-olds in its Academy during that stretch to start gaining vital experience for the future.

“What it does is it allows you to make mistakes,” Pulis said of that time putting in long hours with younger age groups. “It allows you to kind of figure out what style of a coach you want to be, how your demeanor is, sessions that you like, sessions that maybe don’t go well and then ultimately what I was preparing for was when I got that opportunity to coach at a professional level, so I had a better idea of how I wanted to work, how I see the game, what I expect from players, what they can expect from me.”

A year or so after retiring to pursue a full-time coaching role in Orlando’s Academy following the 2014 season, Pulis got his first professional gig with Orlando City B when it joined the Championship in 2016. He led OCB to the postseason in its inaugural campaign and a 19-23-20 record in league play over two seasons before making the move to Saint Louis in November 2017.

With Pulis and Collins separated by just 14 months in age and having shared similar career arcs, it should come as no surprise that the two young coaches are starting to build a budding relationship.

“We went out for a meal actually the last time we played against each other because he’s good friends with my assistant [Martin Paterson],” Collins said. “Anthony’s really made an effort to try and kind of share some of his experience.” 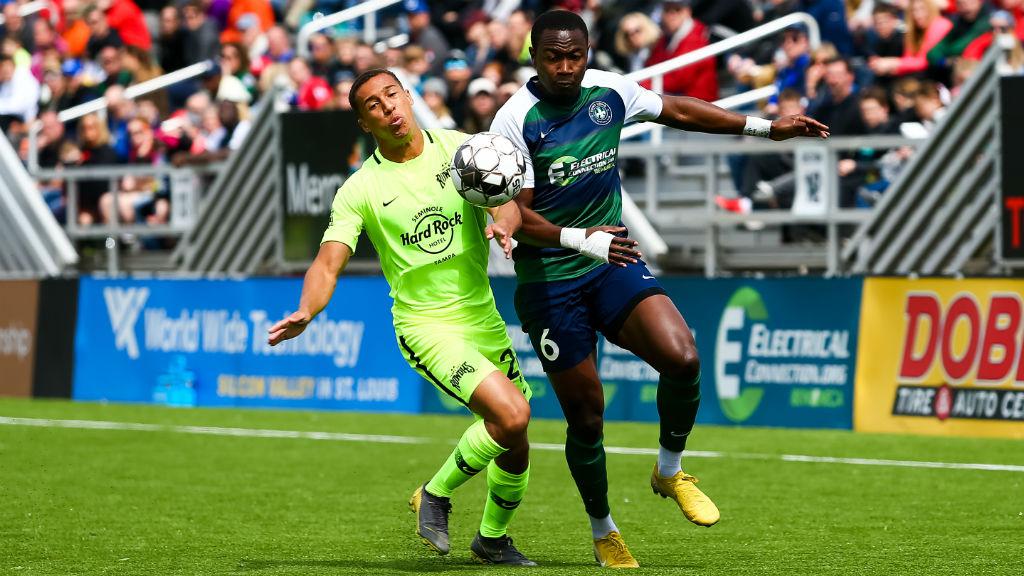 That cordiality will likely be shut down for 90 minutes on Saturday as Pulis and STLFC head to Saint Petersburg with the goal of ending the Rowdies’ five-game unbeaten run and earning its first league win since April 27.

“He’s obviously got them playing in a style and a way that suits them and obviously they’ve been getting results, so credit to all the people at the Rowdies organization for a really good start,” said Pulis. “But we’re going to go in there and try to be positive and obviously try to get a result.”

Collins will be hoping his side can end its winless record all-time against Saint Louis (0-1-2) and that it might not need any heroics like his two years ago to make that happen.

“It seems like a long, long time ago now, almost hard to remember it,” Collins said of his goal. “That was a good moment, but hopefully we don’t need any last-minute goals this weekend. Hopefully we can get the job done.”