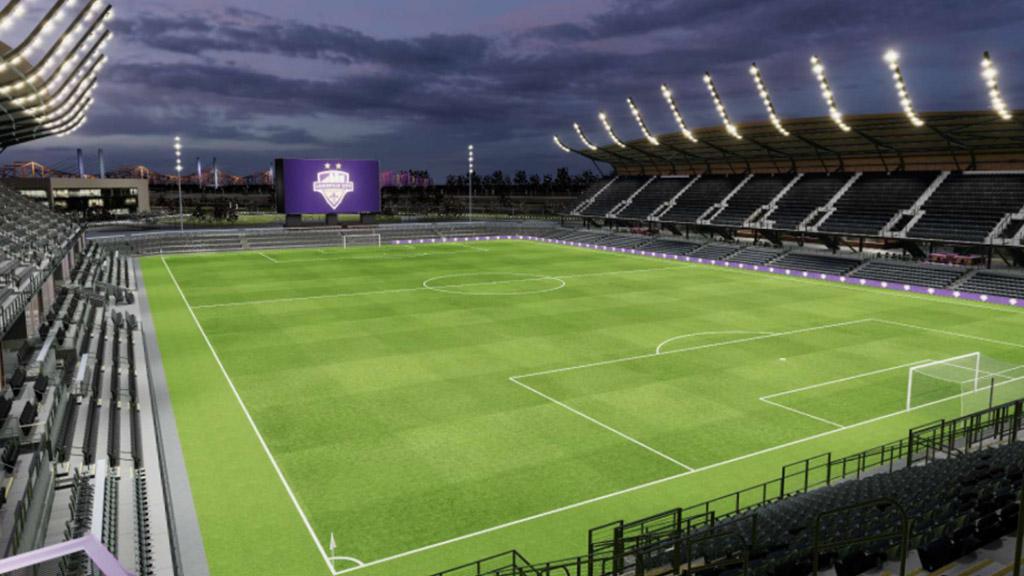 It’s evident in the progress made on the venue itself, with its steel beams and roof now towering over the Butchertown neighborhood as construction continues toward the official opening next spring.

It’s also evident in the virtual world, where fans can check out the view from seats and sections around the venue as they decide where to purchase season tickets for the 2020 campaign.

And yet for those who have helped steward the project toward its conclusion, there is still a sense of the unreal to the reality that is appearing before their eyes.

“In any start-up business, I’d say, you’re constantly evolving, your business model is constantly evolving,” said LouCity President Brad Estes. “Then throw in something like a stadium [project], I don’t think you can truly appreciate what it takes to get there until after it’s all done. It’s certainly very rewarding to drive by and see the progress because it’s literally daily at this stage. … It’s very visual and it’s very satisfying, but I’m not sure I can really appreciate what we’re doing right now until we have a little time to pump the brakes and look at it.” 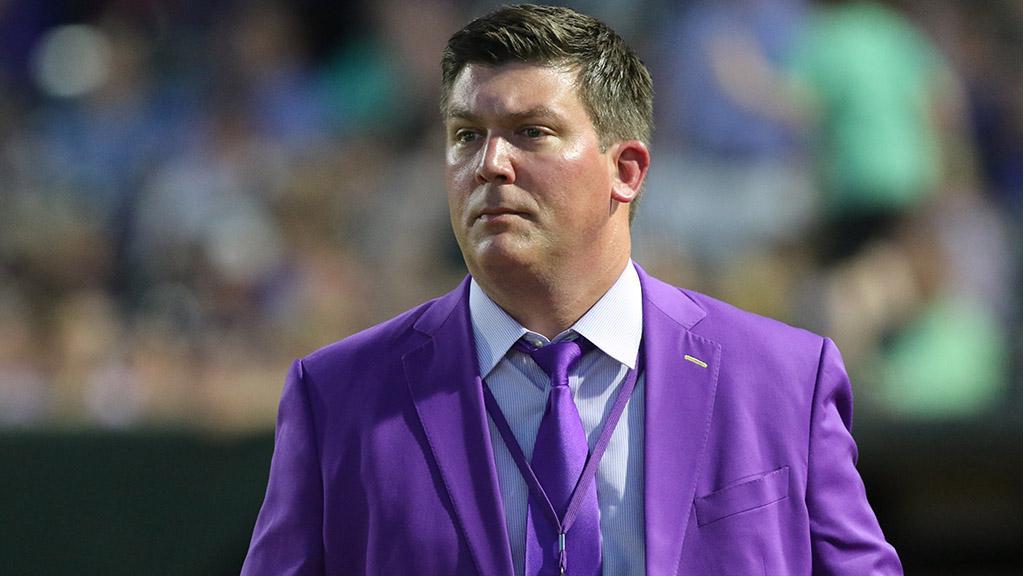 You could surmise that part of the sentiment derives from the speed with which this project has accelerated from being a rendering on a digital screen to a visible construction. It was only in August 2016 that a feasibility study confirmed the need for a stadium to be built to support the club’s long-term health. A little more than a year later in September 2017, the Butchertown location was confirmed and then a groundbreaking ceremony followed last June.

As slow-moving as projects of this kind can sometimes be, LouCity’s leadership took the reins to create a sense of urgency with city and state officials that resulted in the swift progress that has been made.

It certainly helped that from the club’s early days it had a strong ally on its side in Louisville Mayor Greg Fischer. As Estes puts it, “he beats the drum for us literally and figuratively.”

“From time-to-time you’ll see him in the Cooper’s section beating the drum as part of our drum line,” Estes added. “He was actually beating the drum when Cameron Lancaster had the winner of the USL Cup Final in 2017. I think his support was crucial.”

But maybe the biggest strength that Louisville had was its strength in numbers. With a wide variety of people making up the club’s ownership group, Estes could call on people with specific areas of expertise to help navigate both the acquisition of the land that would be needed for a 14,500-seat stadium and the financing the club would need to complete the deal.

For the first part, both Estes and Neace give credit to John Hollenbach and Tim Mulloy, both of whom brought extensive experience in local real estate. As the Butchertown neighborhood quickly became apparent as the first-choice venue for the stadium – “I think after getting through about 10 percent of the site selection process, maybe 20 percent, the Butchertown site made the most sense,” said Estes – putting together deals to acquire all the land from different groups without the price ballooning was key. 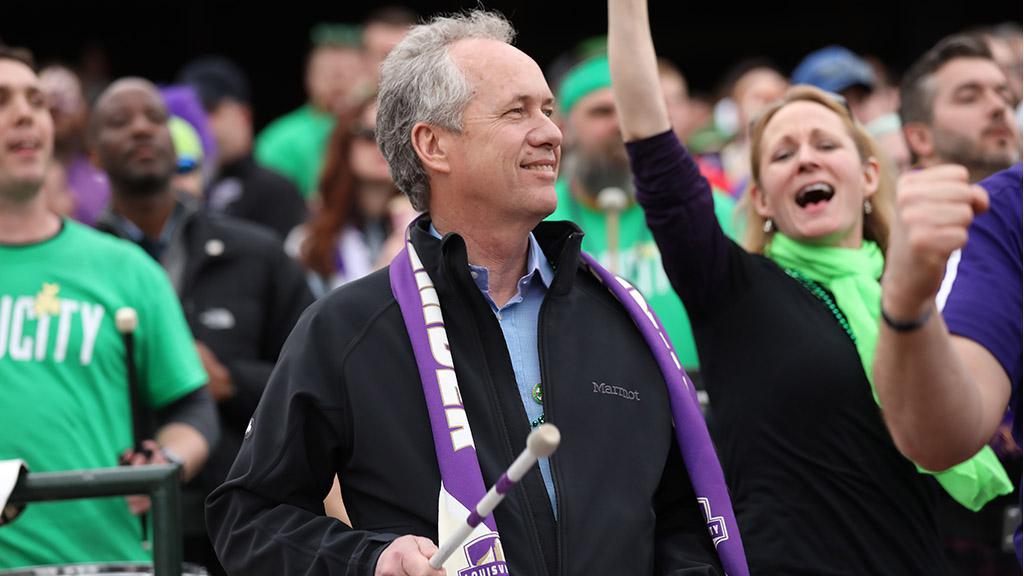 Louisville Mayor Greg Fischer has been a regular in the Louisville Cooper's section since the club's inception, at times working the drum line for the supporters group. | Photo courtesy Em-Dash Photography / Louisville City FC

“Without a doubt for me the biggest challenge we had – and it was tackled masterfully by a couple of our owners with the help of local government – was getting six parcels of land that were adjacent to one another under option without having a massive bidding war and price hike,” said Estes. “You had two businesses that were on the site and then a couple of defunct businesses and other of parcels of land, but to get all of those pieces of land under option was masterful.

“The fact those guys were able to keep the owners of the parcels of land from getting together and jacking up the price, I wish I could have been part of it because I’m sure it was fun.”

Then there was the question of the financing that was needed to complete the deal, an agreement that was negotiated by financial experts Mike Mountjoy and Tom Mueller, which saw the club’s owners step up to the mark to guarantee the loan that had been agreed.

“The moments that made me the most nervous were when we were getting the terms of the loan, what the loan was going to look like and what the guarantee was going to be from some of the owners,” said Neace. “Because unlike a lot of the markets that are trying to do what we’re doing, we didn’t have a whale or the big investor. I still believe Louisville is like the little engine that could so far. We didn’t have that one big pocket driving this stuff, we had to build consensus, so we were very nervous that although we got a bank to agree to make the loan, would owners step up and agree to help guarantee that, because it is a risky business proposition.” 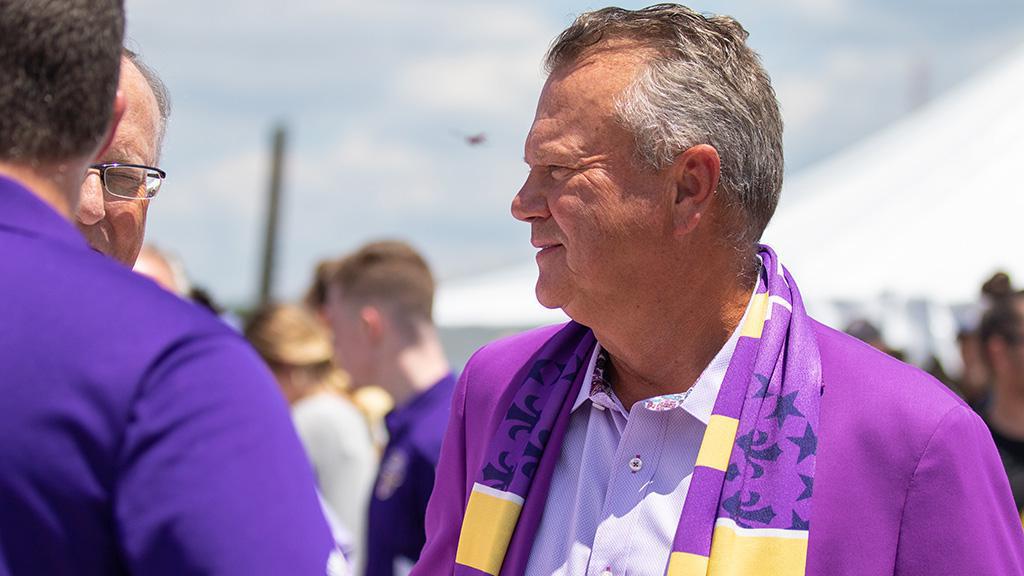 Once those two pieces fell into place, and both architecture firm HOK and general contractors had been hired, it served as the moment that the plan went from an idea to something real for Neace.

“We knew we had a great concept, a great design and someone who could build the thing on time and on budget,” said Neace. “Then we met with the owners, of course, and we talked with the owner’s group about what it was going to be, and we asked for checks, and people start actually writing checks. That’s probably when you know it’s real, right, when the owners pull the check book out.”

A little more than a year on from the official groundbreaking, the stadium is now a reality for Louisville, too. After collaborating with HOK on not only the design of the stadium but the features that would make the venue feel distinctively a part of the city – for example the barrel-colored roof that pays tribute to Louisville’s bourbon heritage – the impact the new venue will have is an exciting prospect.

“I think just visually and aesthetically the skyline is going to be completely transformed by the roof and how close it is to the interstate,” said Estes. “It will be so visible for the community and having that building there, our Chamber of Commerce CEO calls it ‘civic furniture’, so I’m really excited about just having that for our community, it’s going to be a source of pride.”

There are other aspects of the venue that Estes is looking forward to unveiling upon its completion, including a beer garden that will have a video screen measuring approximately 150 square feet that the club can use to host watch parties for away games and other events around the year.

And while Louisville moves toward completion of its venue, there are now others in the Championship who are moving in the same direction they were three years ago when the process began with the stadium feasibility study. For those ownership groups, both Neace and Estes have the same advice as more clubs look to follow them into creating a venue that will serve their long-term goals.

“I think the two keys are transparency – you need to be transparent about what you’re trying to do and why, and in doing so seek input from your constituents, the people that you’re going to affect – and I think probably the thing that helped the most as I got involved and we changed the way we were trying to do things as Louisville City, you need flexibility,” said Neace. “You can’t just get it done the way you want it done. You might have a vision, but inside that vision you need to have some flexibility and the ability to bend because it affects a lot of other people, and you need their input and their advice if you’re going to be successful.”

“If someone has a question, answer it,” added Estes. “During our Metro Council approval process there were several council members that had a lot of questions and thought the process was rushed, and we said, ‘well, here’s what we’re going to do. We’re going to come to your Metro Council chambers and we’ll sit there all day for two days.’ This was myself and two of our board members, and we said, ‘whatever questions you have, we’re happy to answer them.’ A lot of them took us up on that offer and I think it made them very comfortable because there was nothing we had to hide.”

That approach has brought LouCity to a key point in its history, and a potentially transformational moment for the city. Adding to downtown’s KFC Yum! Center and Muhammad Ali Center, the new stadium is set to become a landmark that will cement the club’s long-term future and provide a tremendous moment of pride for all of those that have worked on the project. 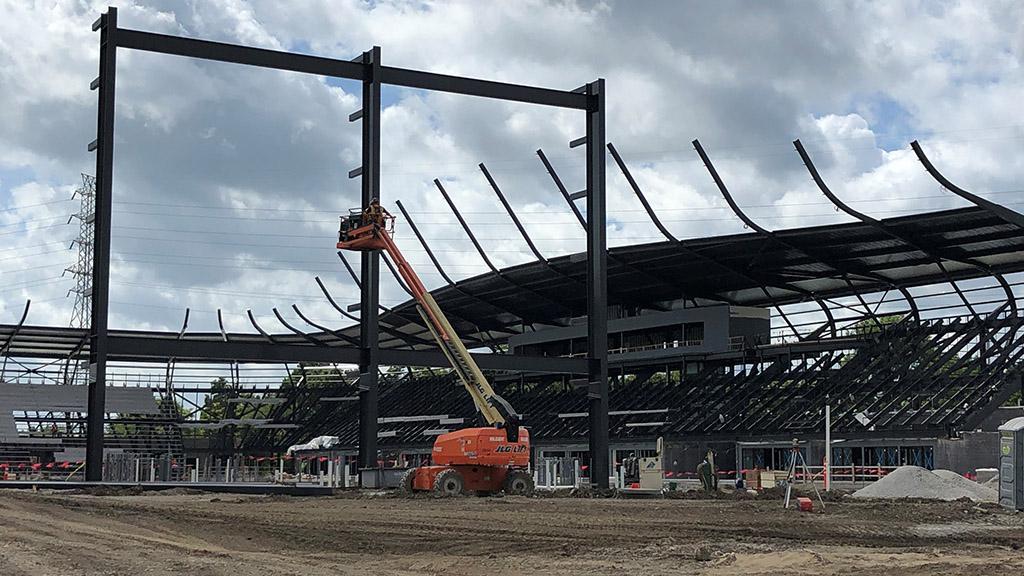 Just over a year after the official groundbreaking, the interior of Louisville City FC's soccer-specific stadium is taking shape ahead of its opening for the 2020 USL Championship season. | Photo courtesy Louisville City FC

For life-long Louisville resident Estes, it brings a powerful sense of accomplishment.

“It’s knowing that it’s going to be here forever,” said Estes. “I have other jobs in my life, and I’ve enjoyed all of them, but knowing that what I’m doing is going to impact this city for years to come gives me a great source of pride. My children, when they talk to their friends, their friends are excited about it and I’m starting to feel that buzz everywhere I go in the city. Just to be a part of it, to be able to work for these owners and ultimately serve this community is just a great source of pride for me.”

So, how are Louisville City FC’s leaders going to feel next spring when the stadium has been completed and the club hosts its inaugural contest at its permanent home? Pride, for sure, but Neace also hopes the sense of family that has been at the core of the club’s ethos since its launch will also mark what will be a special day for the club, the city and its supporters.

“The thing I hope most about that is that everyone who has helped us to that point – players, coaches, fans, the like – are all there to celebrate that moment with us,” said Neace. “I know we can’t get every former player back – some of them might even be playing against us that night, right? – but everybody that’s part of the Louisville City family, I hope we can get them there and that we have that sense of accomplishment and pride in what we did, but also still that sense of family.”