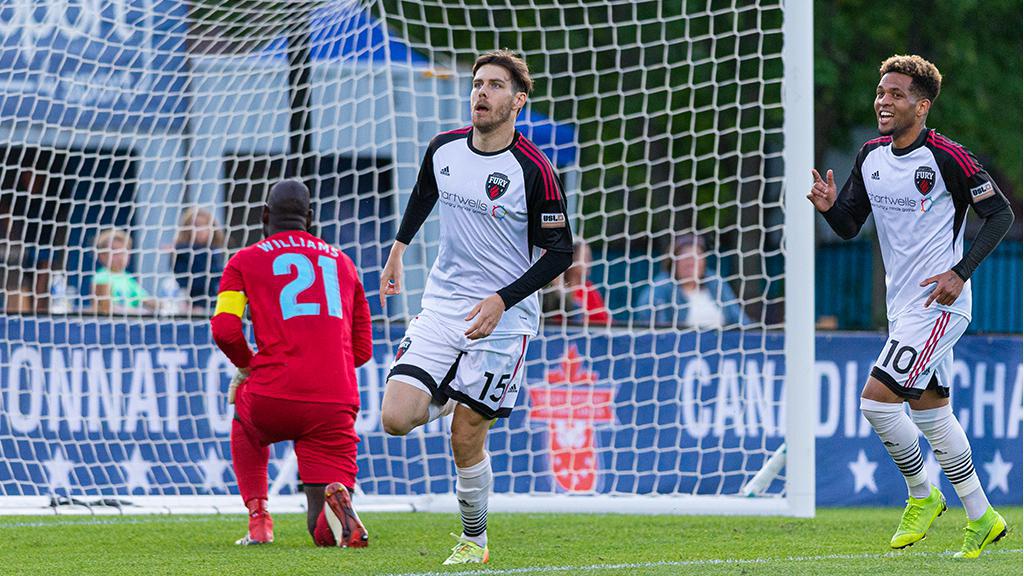 Ottawa Fury FC's Maxim Tissot scored the game-winning goal as his side took a 3-2 win against HFX Wanderers FC in the first leg of their Qualifying Round 3 clash in the 2019 Canadian Championship. | Photo courtesy Trevor MacMillan / HFX Wanderers FC

HALIFAX, Nova Scotia – Ottawa Fury FC got a pair of goals by Thiago De Freitas and a second-half winner by Maxim Tissot to earn a 3-2 victory against the Canadian Premier League’s HFX Wanderers FC in the first leg of their Qualifying Round 3 clash in the 2019 Canadian Championship at the Wanderers Grounds on Wednesday evening.

The two sides will meet again at Ottawa’s TD Place on July 24 for the second leg, with the winner set to advance to face defending champion Toronto FC in the Semifinals.

Ottawa took the lead in the 23rd minute on De Freitas’ first goal for the club since his offseason arrival. The Brazilian rifled home a finish from 25 yards into the top-right corner after receiving the ball from Chris Manella, who had claimed possession in the attacking third after a loose clearance by the Wanderers defense.

Halifax got back on level terms in the 32nd minute when Fury FC goalkeeper Carl Haworth was called for a foul in the penalty area that allowed Perea to score from the penalty spot, but three minutes later De Freitas was at it again with another powerfully hit strike from the left side of the penalty area into the right corner of the net.

The Wanderers got onto the front foot early in the second half and were rewarded when a low cross by Perea deflected off Fury FC defender Dakota Barnathan and into the net for an own goal in the 62nd minute.

Once again, though, Ottawa wouldn’t allow its hosts to remain on level terms for long as Tissot made a big impact as he made his second appearance in the 2019 season off the bench. The Gatineau native put Fury FC back on top five minutes after Barnathan’s moment of misfortune with a stellar strike into the top-left corner.

“We were always able to control and dominate the game,” said Fury FC Head Coach Nikola Popovic. “I think we had the ball more, we had more passes, we had more shots on goal, and we scored more goals than Halifax so I think at the end the score shows a fair result.”

Tissot’s goal proved the difference as Ottawa held the Wanderers to only two shots on target for the contest. Fury FC will now carry not only the lead in the series, but also three away goals with them back to TD Place as they look to reach the tournament’s Semifinals for a fourth consecutive season.