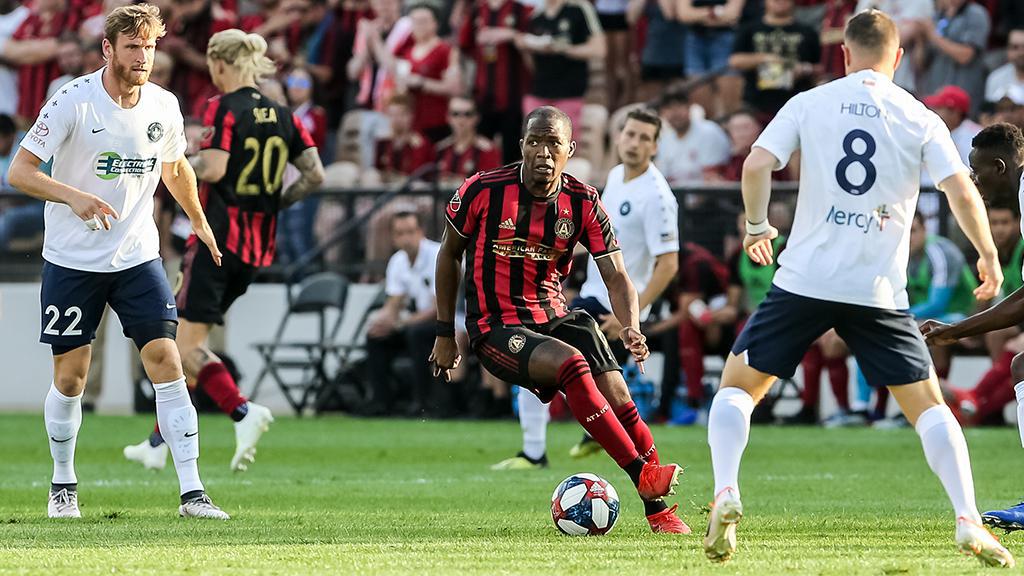 KENNESAW, Ga. – Saint Louis FC battled deep into the second half but goals by Pity Martinez and Josef Martinez saw Atlanta United FC into the Semifinals of the 2019 Lamar Hunt U.S. Open Cup with a 2-0 victory at Fifth Third Bank Stadium on Wednesday night.

The hosts took the initiative from the opening kickoff and Saint Louis goalkeeper Tomas Gomez had to be alert to make a low save on Pity Martinez’s shot from the left side of the penalty area in the fifth minute. Pity Martinez then fired wide five minutes later after a good give-and-go with Josef Martinez sent the Argentine through the STLFC defense.

Atlanta’s pressure continued as Gomez made a pair of saves from Josef Martinez inside the opening 25 minutes, and while Saint Louis did its best to contain the building pressure it created a big chance of its own eight minutes before halftime. A corner kick from the left by Lewis Hilton found Sam Fink’s curling run to the near post, but STLFC’s captain hit the left post with his header as the ball went behind to safety.

The Five Stripes got back onto the front foot to start the second half and STLFC defender Sean Reynolds made a key block to deflect away a close-range chance for Josef Martinez in the 48th minute before Franco Escobar volleyed well over from the ensuing corner kick. Gomez soon after made a solid save on a chance for new Atlanta signing Emerson Hyndman, but the STLFC shot-stopper was helpless to keep out a curled chip by Pity Martinez in the 52nd minute to the top-right corner from 15 yards.

Saint Louis’ best chances continued to come from set pieces, and Kadeem Dacres shot wide of the right post after a half-cleared corner kick in the 62nd minute fell to him just inside the penalty area. Fink then found space on a back-post corner by Lewis Hilton from the left seven minutes later but was unable to control his header and find the target.

Gomez kept his side within a goal with 13 minutes to go when he made a fine diving save to keep out a low effort by Atlanta’s Eric Remedi that was arrowing toward the bottom-right corner, but it was Saint Louis that carried the pressure late as it looked for an equalizer. STLFC had four corner kicks inside the final 10 minutes and stoppage time, only for Atlanta to handle Hilton’s well-flighted deliveries well to hold its visitors at bay.

The hosts then saw out the contest two minutes into stoppage time off a counterattack when Josef Martinez was brought down for a penalty kick. The Venezuelan international stepped up and converted, bringing Saint Louis’ hopes of an equalizer to an end.