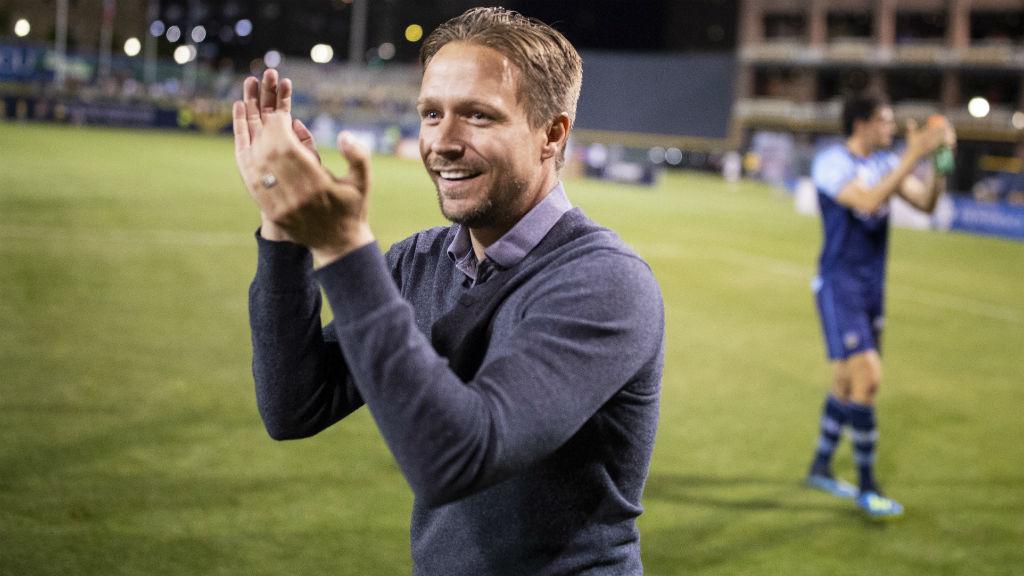 El Paso Locomotive FC Head Coach and Technical Director Mark Lowry may be the youngest person in his position across the USL Championship, but he is showing a shrewd business sense well beyond his years.

The 34-year-old is already responsible for facilitating the Championship’s top in-season signing, having acquired former United States international and now-Locomotive FC leading scorer Jerome Kiesewetter in early April, and looks to have doubled down on Tuesday with the addition of former Real Monarchs SLC midfielder Sebastián Velásquez.

This move, especially when examined in the context of last week’s trade with Tulsa Roughnecks FC, makes a lot of sense.

In that deal, Locomotive FC flipped midfielder Calvin Rezende to the Roughnecks for defender Moses Makinde to bring depth to a back line that Lowry described at the time as being “down to the bare bones this last couple of weeks.”

El Paso defenders Chiro N’Toko and Yuma have been in and out of action in recent weeks with nagging injuries and veteran center back Mechack Jérôme will miss the remainder of the season after rupturing his Achilles while representing Haiti at the 2019 Concacaf Gold Cup. Those absences forced Drew Beckie – another midseason acquisition, who played under Lowry at the coach’s former club Jacksonville Armada FC – into the starting lineup until he picked up a knock in the first half of a scoreless draw with San Antonio FC on June 26.

Given the injury issues across the Locomotive FC defense, a move for Makinde – who had recorded 11 interceptions, 21 clearances and 42 recoveries in 11 appearances with the Roughnecks this season – was necessary, even if it meant sacrificing a creative threat like Rezende.

And while Rezende had contributed a pair of goals (tied for second on the team) and an assist in just 384 minutes of action this season, he was expendable, especially with a replacement of Velásquez’s quality already lined up.

The 28-year-old Colombian is also an attack-minded midfielder and will bring plenty of creative influence for a side that has sometimes lacked such this season. El Paso currently sits in the bottom five of the Western Conference in chances created per game (8.72) and by scoring just 1.22 goals per contest so far this season Locomotive FC ranks ahead of only 17th-place Colorado Springs Switchbacks FC (0.89) and 18th-place Tacoma Defiance (0.78).

The fact that the club currently sits comfortably in the playoff places tells you all you need to know about Lowry’s defensive unit (when healthy) and the importance of Kiesewetter and his 10 goals. And while Omar Salgado has done well to support his forward partner with two goals and four assists in 18 appearances, Velásquez should be able to add some more steam to the Locomotive FC attack.

In two seasons with Real Monarchs SLC, Velásquez scored 16 goals and dished out 10 assists while compiling 68 key passes and a passing accuracy rate of 85.62 percent over 47 appearances. He helped the Monarchs claim the Championship’s 2017 regular-season title and will be eager to reassert his influence after a six-month stint with Suwon FC in South Korea.

If he can link up with Sebastián Contreras – the only El Paso player averaging more than one key pass per appearance this season – in midfield and quickly build chemistry with Salgado and Kiesewetter, then the sky is the limit for Locomotive FC in the second half of the season.