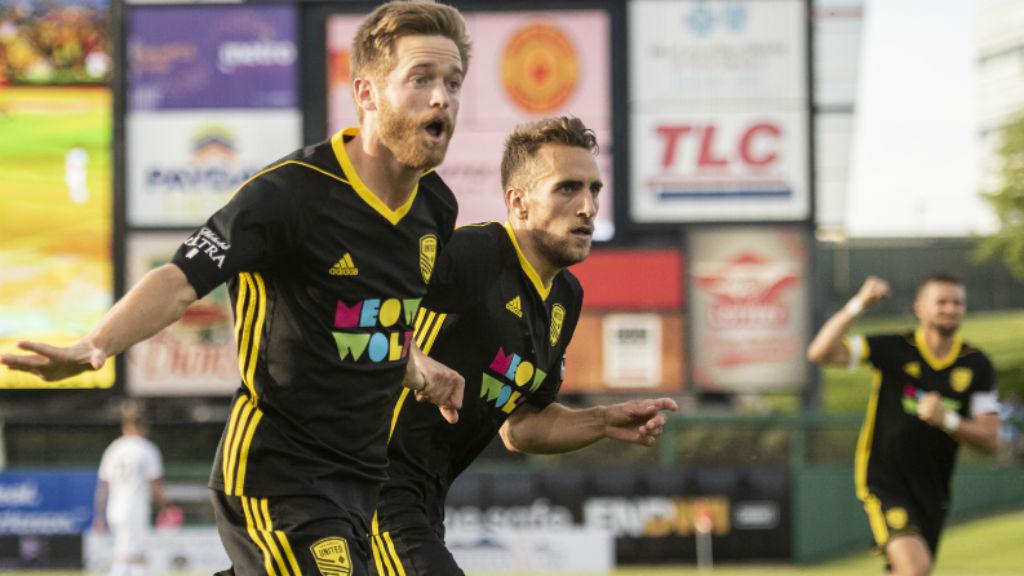 After the final whistle blew to cement New Mexico United’s 2-1 victory over Major League Soccer’s FC Dallas and book the USL Championship expansion side’s place in the Quarterfinals of the 2019 Lamar Hunt U.S. Open Cup, David Carl and the rest of the travelling New Mexico support stayed behind in the stands of Westcott Field to celebrate with their heroes.

Chants and songs filled the Dallas air – as they had throughout the evening – but the noise now was buoyed by unbridled joy after the nerves of 90 action-packed minutes had faded away alongside the hosts’ hopes of lifting the Dewar Cup.

Once the celebration in the away end had reached its conclusion, Carl, the Co-President of NMU supporter’s group The Curse, and company piled back into their bus and began the 10-hour drive home to Albuquerque with the comforting feeling that this wasn’t the end of the club’s magical Open Cup journey.

However, it was on that ride through the plains of Texas that Carl took notice of the challenge now facing him and his club: a trip to Minnesota United FC. With the Quarterfinal draw already predetermined and excitement at an all-time high, questions from fellow fans began flooding his social media mentions.

Are we going to get a bus? What’s the plan?

“I looked at the 20-hour bus ride from Albuquerque to Saint Paul and for the most part I would say that’s probably not feasible for most people. You’d have to take a lot of time off work, it’s very difficult,” said Carl. “I half-heartedly looked at flights thinking this would be great, but I’m sure it’s going to be really expensive. Round-trip tickets were like $500-600.”

While Carl was trying to figure things out from the road, First Financial Credit Union Vice President Clint Gray was back in Albuquerque assessing travel options with fellow New Mexico United fans across social media.

“I was on Facebook and I saw everyone trying to figure out tickets,” said Gray. “Someone posted that over 1,000 people were looking at [plane] tickets from Albuquerque to Minnesota through one of the websites and everyone kept saying it’s too expensive.

“The next day I went to our CEO and was like there’s a great opportunity here where we can help fans get to Minnesota and kind of told him what had happened – that we won – because he’s not a big soccer fan, so I kind of just told him a little bit of backstory…and he was like ‘Sure, go ahead. Let’s see what we can do.’ So, then I called [Vice President of Ticket Sales and Partnerships] Ron Patel at New Mexico United and told him we want to help sponsor people to get there.”

Carl, Gray, Patel and other members of the NMU front office held meetings on the Thursday and Friday following Wednesday night’s win over FC Dallas, discussing any option under the sun that seemed to make sense.

“The original thought was if we donate money, can we get some people there?” said Gray. “And then by Friday it turned into, let’s see if we can’t just get a full plane and First Financial Credit Union will subsidize a portion of it and everybody else just pays a lower amount.”

Great news, NM United fans! We have a flight to MN for our July 10 @opencup battle. Thanks, @imafirst1 for a generous donation to help subsidize this amazing fan trip!

By 6 p.m. local time on Friday night, the plan was in place. The club, with First Financial’s help, had chartered a 180-seat flight to Saint Paul and was offering fans a chance to purchase a travel package that included round-trip airfare, transportation between the airport and hotel, a ticket to the match and a swag bag with a limited-edition road trip t-shirt for $249 per person plus tax.

The group would depart the morning of Wednesday July 10, attend the match that evening at Allianz Field and then have time to tour around Saint Paul on Thursday before flying home that night.

The initial response from the fanbase, as you might expect, was immense.

This is amazing. What a great club, awesome sponsors, and the best fans! Thank you for being such a great part of NM! #somosunidos!

This is probably the coolest thing ever seen on the tweeter. What an amazing community we’ve got going here. Thanks @imafirst1!!

Now, it was just a matter of being a part of what Carl coined “The Lucky 180.”

When the ticket link went live the following Tuesday, it generated over 20,000 hits and the 180 available spots filled up in under seven minutes, with Carl and Gray among those lucky enough to secure seats.

For Gray, who has attended each of the club’s home games in league play but has yet to hit the road on this Open Cup run, the trip represents an opportunity to experience something new and build a stronger bond with fellow fans in the light of the club’s mantra ‘Somos Unidos’.

“I expect it to be crazy,” said Gray. “I think you have a lot of New Mexico United fans who are super excited to get to make this trip, especially because they didn’t think they were going to be able to. We’re all going to be together on this plane and so the whole two-day experience really is just all of us together.”

For Carl, who rode a bus to Dallas and Denver in an eight-day stretch of June, this trip presents the luxury of a little bit more leg room as well as the opportunity to bring that party atmosphere seen throughout this Open Cup run – and all season long at Isotopes Park – to the skies.

“The two bus rides we’ve gone to Denver and to Dallas, the ride to the game was loud, the ride back was dead silent because everybody’s either sleepy or hungover,” said Carl. “I think on the way there people will be excited. I think there will be yelling, there will be chanting. If you’re going to try to sleep on that plane ride, good luck.”

While the goal is certainly to go to Minnesota, support the team and get a win on Wednesday night, which would earn the club a spot in the Semifinals and a potential trip to Los Angeles or Portland, Carl is focused on enjoying every moment of this adventure as New Mexico United writes another chapter of its fairytale expansion season for its adoring fans.

“If you had told me at the start of the U.S. Open Cup that at some point, we would be booking a freaking charter flight, I would’ve said you were crazy, but here we are.”