MURRAY: Brown Will be Missed, but Reno Positioned to Continue Success 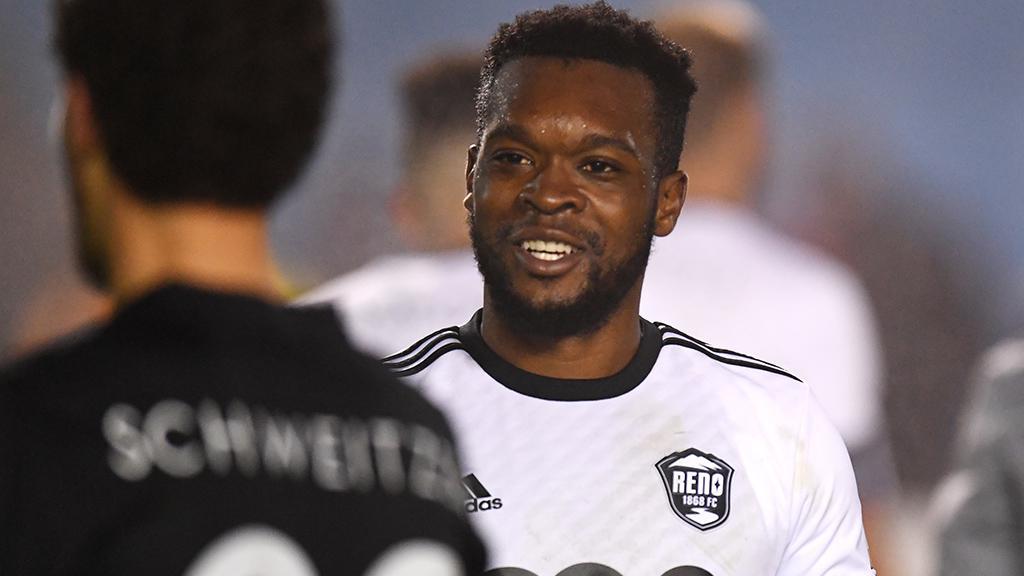 With 28 goals and 14 assists over 68 appearances in the Championship for Reno 1868 FC, Brian Brown's consistency was his hallmark during two-and-a-half seasons at the club. | Photo courtesy Mark Reis / Colorado Springs Switchbacks FC

When Brian Brown departed Greater Nevada Field on June 1, once again a goalscorer in the club’s 4-0 victory against Las Vegas Lights FC, to join up with the Jamaica squad set to compete at the 2019 Concacaf Gold Cup, it scarcely could have entered any fan’s mind that it would be the last time they’d see the prolific forward in an Azules uniform.

A little over a month later, however, after helping the Reggae Boyz to their third consecutive trip to the Semifinals of the regional tournament, Brown will depart to FK Partizani, the reigning champion in Albania’s SuperLiga.

It’s a departure that certainly will be a disappointing one to the fans Brown has made in Reno, where he became the club’s all-time leading scorer in its short history over the past two-and-a-half seasons. Brown recorded 28 goals in 68 appearances since the start of the 2017 USL Championship season for 1868 FC, good for sixth-most in the league over that span.

He also recorded 14 assists for good measure across the same timeframe, second-most behind only Phoenix Rising FC standout Solomon Asante among the league’s top 10 goalscorers, as his ability to set up others helped power 1868 FC to consecutive postseason berths.

There were memorable moments as well, including his stoppage-time winner on the road against Real Monarchs SLC last October that earned Reno its first postseason victory. There was the one-goal, one-assist performance in 1868 FC’s three-goal comeback against Sacramento Republic FC last May, which added to the burgeoning rivalry between the two clubs.

But more than anything else, Brown brought a consistency in performance that can sometimes be in short supply. No, there was never a hat trick in the league for the Azules, but in 40 starts he notched 22 goals and 10 assists, a level of production that once again this season had put him among the league’s best and earned him a place in Jamaica’s squad for the Gold Cup.

Those types of performances should attract the attention of a club like FK Partizani, which as the Albanian SuperLiga’s defending champion also finds itself in the First Qualifying Round of the 2019-20 UEFA Champions League. Partizani squares off over two legs with Qarabag of Azerbaijan starting next week as the road to a place in the group stages and all that would bring begins.

If there’s a silver lining to be found for the Battle Born Brigade and the rest of Reno’s fans, it’s that while Brown starred on many nights at Greater Nevada Field, the club itself seems positioned to remain a strong contender in the Western Conference for the remainder of this season. Wednesday night’s 4-0 win against Rio Grande Valley FC made it three wins in a row for 1868 FC – all coming in Brown’s absence – as it emerges as one of the leading challengers to Phoenix Rising FC in second place in the conference standings.

The club will also certainly benefit from the influx of capital that will come from Brown’s sale. As it is for almost all clubs around the world, when the opportunity arises to bring money into the club via the sale of a player, it’s a difficult proposition to turn down if the price is right.

With Corey Hertzog now having reached eight goals this season, and an assembled cast of talented attacking pieces including Wednesday night’s hero Sam Gleadle, Raul Mendiola, Lindo Mfeka and Seth Casiple set to lead the way, Reno should still have enough firepower to make a competitive charge when October comes around.

So, while Brown will certainly be missed, taking his ability to produce to new climes, the club and its fans should wish him well, confident that continued success lies ahead.