Which players get your vote as we reach the midway point of the season? 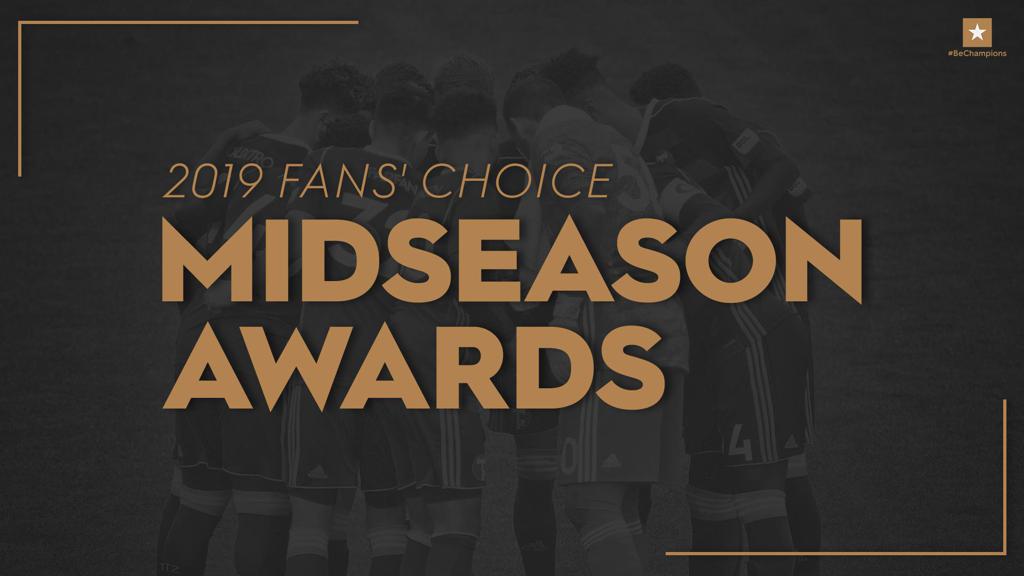 This weekend marks the midway point of the USL Championship’s 33-week regular season, a campaign that has already produced some outstanding individual and collective displays across the league as the race for the postseason enters a key stage.

All statistics through Wednesday, June 26

Goalkeeper of the Year

Zac Lubin, Phoenix Rising FC – Since taking the reins in goal for Rising FC this season, Lubin has posted 36 saves, eight shutouts and a save percentage of 83.33 to accumulate a league-best goals-against average of 0.54.

John McCarthy, Tampa Bay Rowdies – McCarthy leads the Championship with nine shutouts, having played every minute of the regular season while accumulating 42 saves, an 82.4 save percentage and a 0.56 goals-against average.

Evan Newton, Indy Eleven – Newton first became the Championship’s all-time leader in shutouts early this season and since has gone on to post six shutouts, a 74.2 save percentage and a goals-against average of 0.68 in another impressive campaign.

Thomas Olsen, Las Vegas Lights FC – Olsen is only one of two goalkeepers to have recorded at least 40 saves and five shutouts this season alongside McCarthy, with the former U.S. U-20 National Team player a key to why Lights FC is in contention for a postseason berth.

Alex Tambakis, North Carolina FC – Tambakis has continued to hold a high standard with a save percentage of 78.85 on 41 saves and four shutouts. Tambakis has only conceded multiple goals twice in 13 appearances, leading to a goals-against average of 0.85

Defender of the Year

Ramon Martin Del Campo, Fresno FC – Del Campo has played a major role in the center of the Foxes’ defense, winning 61 of 87 aerial duels to lead all defenders and notching 17 interceptions and 65 clearances. Del Campo’s 14 blocked shots are also tied for eighth-most in the league as he has helped Fresno become a strong contender for a top-four finish in the West.

Papé Diakité, Tampa Bay Rowdies – Diakité has featured prominently in the Rowdies’ defensive success, leading the league’s defenders with 99 clearances, while winning 60 of 82 aerial duels and 86 of 130 duels. Diakité has also been one of the most reliable tacklers in the Championship, winning 12 of 13 tackles this season.

Bryam Rebellon, El Paso Locomotive FC – Rebellon has been outstanding for the Western Conference side with the fewest goals conceded so far this campaign, leading all defenders in the league in winning 37 of 47 tackles while leading his side in aerial duels won (27), and sitting second on the team with 21 interceptions and 115 duels won.

Jermaine Taylor, Austin Bold FC – Taylor has recorded consistent numbers across the board defensively, leading all defenders with 47 interceptions while also sitting in the top 15 in recoveries (100) and clearances (68). Taylor has also recorded 11 blocked shots and completed 80 percent (469 of 584) of his passes overall.

Ken Tribbett, Nashville SC – Tribbett has been a key figure in Nashville’s solid back line since his offseason arrival, winning 96 of 134 duels and 58 of 79 aerial duels and leading the team with seven blocked shots and 63 clearances. Nashville has posted a 0.61 goals-against average and six shutouts in the 13 appearances Tribbett has made this season, while failing to record a shutout in the three games he has not appeared.

Coach of the Year 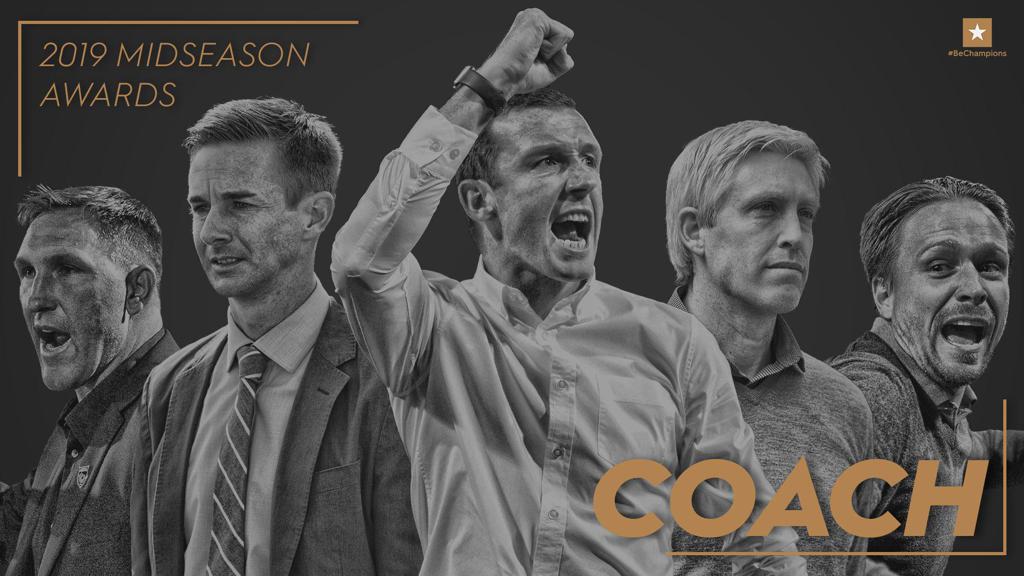 Neill Collins, Tampa Bay Rowdies – In his first full season at the helm, Collins led the Rowdies to a club-record 13 game undefeated streak to open the season and has his side sitting on top of the Eastern Conference standings with the best record in the league so far.

Troy Lesesne, New Mexico United – Lesesne put together an expansion squad that has been immediately competitive, at times sitting in first place in the Western Conference while averaging almost two goals-per-game in league action at the midway point of its season.

Mark Lowry, El Paso Locomotive FC – Lowry assembled a solid opening-day roster than has subsequently seen new pieces arrive to allow Locomotive FC to flourish in its inaugural season. El Paso’s patient play has allowed it to post the best defensive record in the Western Conference and put the side in contention for a top-four finish at the end of the season.

Rick Schantz, Phoenix Rising FC – After leading Rising FC to the Western Conference title last season as interim Head Coach, Schantz has led a highly-talented squad to the most goals in the league and a club-record seven-game winning streak that is currently ongoing. After a slow start to the season, Schantz’s adjustments have placed the side as the current favorite to lift the title at the end of the season.

John Wolyniec, New York Red Bulls II – Wolyniec has once again done a sterling job with the hand dealt him, putting the Red Bulls II in contention for first place in the Eastern Conference thanks to an attack that has recorded the most goals in the East (31) and has recorded the most Big Chances Created (51) in the league despite a rotating cast in the club’s front line.

Young Player of the Year

Felipe Hernandez, Swope Park Rangers – Hernandez has shone despite the Rangers’ struggles this season with his six goals and two assists adding to the impression he gave a year ago when selected to the USL Championship’s 20 Under 20. Hernandez has also recorded 18 key passes and completed 80 percent of his passes overall (380 of 475)

Luca Lobo, Tulsa Roughnecks FC – Lobo was one of the keys to the Roughnecks’ fast start to the season, and still leads all players eligible for this award with seven goals on the season. The young defender has also recorded 18 interceptions, 46 clearances and 73 recoveries in his first season in the professional ranks.

Douglas Martinez, Real Monarchs SLC – Martinez has come into his own in his second season with the Monarchs, notching five goals and a team-leading five assists for Real to keep the side in contention for a third consecutive trip to the playoffs. The Honduran youngster has also recorded 10 key passes and posted a conversion rate of 29.2 percent.

Caleb Richards, Tampa Bay Rowdies – On loan from Premier League-bound Norwich City FC, Richards has been a strong piece in the Rowdies’ back line with a team-high six blocked shots and another 18 interceptions. The 20-year-old has proven adept moving forward, too, recording a 77.1 percent passing accuracy rate on 50.8 passes per 90 minutes and seven key passes so far this season.

Eryk Williamson, Portland Timbers 2 – The United States U-23 international has recorded seven assists and three goals for T2, helping the club again sit in contention for a postseason berth. Williamson also leads Portland with 23 key passes, while posting a 79.1 passing accuracy rate on 40.7 passes per 90 minutes and recording 15 interceptions defensively.

Solomon Asante, Phoenix Rising FC – Asante is currently the only player to sit in the top two in the league in both goals (10, tied for second) and assists (8, first) as his outstanding play for Rising FC has picked up steam over the second quarter of the season. The diminutive Ghanaian is currently on a six-game scoring streak as his ability to read the game has put him one, if not more, steps ahead of those tasked with marking him.

Brian Brown, Reno 1868 FC – Before being called up to international duty for Jamaica at the 2019 Concacaf Gold Cup, Brown had recorded eight goals and five assists in 11 games to put 1868 FC again solidly in contention for a third consecutive trip to the postseason. Brown leads Reno in both categories and has also been sharp overall with the ball at his feet with an 82.8 passing accuracy rate on 26 passes per 90 minutes.

Kevaughn Frater, New Mexico United – The expansion side has had many players worth celebrating this season so far, but with a league-leading 11 goals and three more in the club’s run in the Lamar Hunt U.S. Open Cup, Frater is already having a career year for his new club. Frater is averaging a goal every 97.3 minutes to help New Mexico boast one of the most potent attacks in the league in its inaugural season.

Jerome Kiesewetter, El Paso Locomotive FC – What will likely prove the shrewdest transaction of the season, Locomotive FC found its goalscorer in Kiesewetter as the former United States international has gone about reestablishing himself in the Championship with 10 goals so far this season. Kiesewetter’s scoring rate of a goal every 107.3 minutes is outstanding, but more notably he has now been responsible for almost half of the club’s goals (21) in the regular season.

Daniel Rios, Nashville SC – After earning All-League First Team honors a season ago, Rios has picked up where he left off after signing with Nashville this offseason. Rios has scored 10 goals so far this campaign – halfway to his total a season ago – and has also recorded 18 key passes while posting a passing accuracy rate of 77.1 percent.