TAMPA, Fla. – Pittsburgh Riverhounds SC forward Steevan Dos Santos has been voted the USL Championship Player of the Week for Week 15 of the 2019 season. The Cape Verde forward recorded a goal and assist inside the opening 13 minutes of the Hounds’ visit to ATL UTD 2 on Saturday night to help spark the club’s 5-0 win, its biggest of the 2019 campaign. 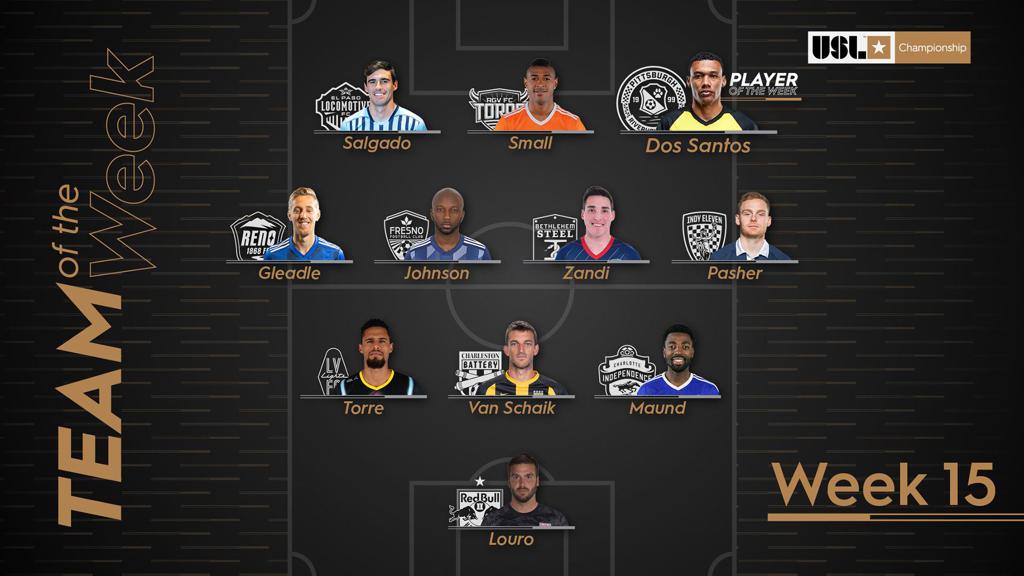 D – Javan Torre, Las Vegas Lights FC: Torre opened the scoring for Lights FC against New Mexico with a spectacular strike and was solid on the back line throughout the night, winning 6 of 9 duels and making five recoveries.

D – Jarad van Schaik, Charleston Battery: The veteran helped the Battery contain the Rowdies’ attack with a team-high five interceptions and recorded five clearances while winning 4 of 6 duels and 2 of 3 aerials.

D – Aaron Maund, Charlotte Independence: Maund made 13 recoveries and won 11 of 16 duels and 6 of 10 aerials to lead the Independence’s back line in its victory against Birmingham Legion FC.

M – Sam Gleadle, Reno 1868 FC: Gleadle recorded a goal and assist and had three key passes overall to lead Reno to a 4-2 victory against the LA Galaxy II on Saturday night.

M – Jemal Johnson, Fresno FC: Johnson recorded assists on both the Foxes’ goals as part of three key passes overall and completed 31 of 37 passes as Fresno earned a 2-2 draw on the road against the Portland Timbers 2.

M – Zach Zandi, Bethlehem Steel FC: Zandi notched a pair of assists, including one after Bethlehem was reduced to 10 men, to help lead his side to a 3-1 victory against Saint Louis FC.

F – Omar Salgado, El Paso Locomotive FC: Salgado was dynamic for Locomotive FC as he completed 4 of 4 dribbles and recorded one assist while winning 9 of 13 duels and making four recoveries.

F – Carlos Small, Rio Grande Valley FC: Small scored a pair of goals to lead the Toros to victory against Colorado Springs Switchbacks FC which moved the side above the playoff line in the Western Conference.

F – Steevan Dos Santos, Pittsburgh Riverhounds SC: Dos Santos had a goal and assist in the opening 13 minutes to send the Hounds on the way to their biggest win of the season against ATL UTD 2.