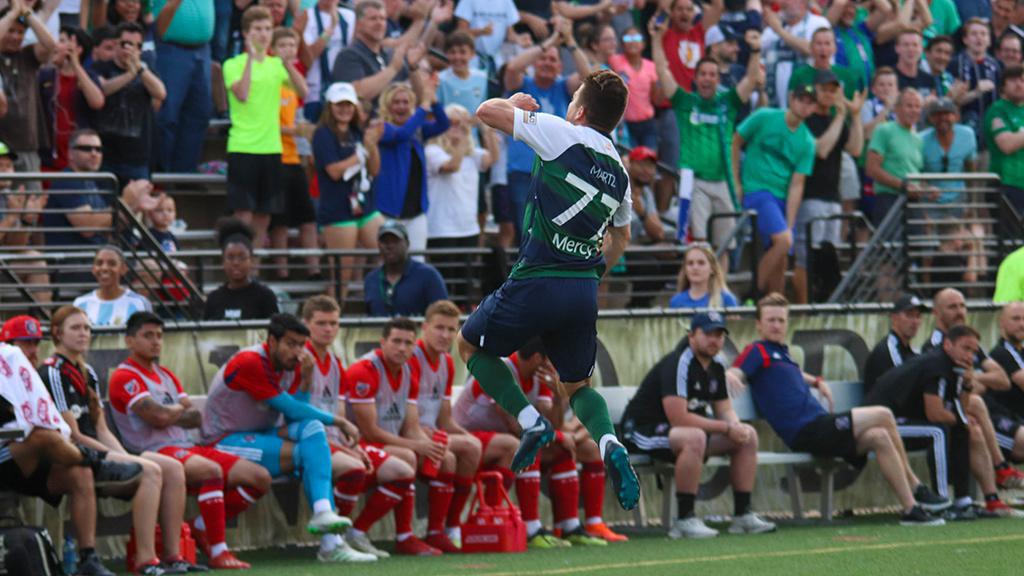 Saint Louis FC's Austin Martz celebrates his goal against the Chicago Fire in the Fourth Round of the 2019 Lamar Hunt U.S. Open Cup, which helped send the club to the Round of 16 for the first time. | Photo courtesy Nick Dawes / Saint Louis FC

ST. LOUIS, Mo. – Sixteen clubs remain in the 2019 Lamar Hunt U.S. Open Cup going into this week’s Fifth Round, all of which would love to bring the Dewar Cup to its fanbase this September.

Of all the cities that remain in the 106th edition of the historic tournament, though, it’s hard to imagine a soccer community that would embrace its club raising the trophy more than those who follow Saint Louis FC.

Since Ben Millers became the first St. Louis-based team to win the tournament in 1920 to St. Louis Busch Seniors becoming the most recent in 1988, the city has had a strong ongoing relationship with the tournament that goes back almost a century.

“When I did the book I would interview somebody about the Kutis team of 1957 that won the Open Cup, I’ve talked to people who could name the entire starting lineup and they vividly remember watching those guys play,” said Dave Lange, author of ‘Soccer Made in St. Louis: A History of the Game in America's First Soccer Capital’. “Then you’ve got the generation from the 1980s that remember the Kutis team and the Busch Seniors team and those guys, and a lot of those guys are still in St. Louis, so there’s a lot of emotional connection with the Open Cup.

“A lot of people remember those teams, they know the players, guys like Harry Keough, who coached Saint Louis University, he had such a profound impact on all those guys who played at St. Louis U and went on to become great players at the national team level like Al Trost and guys like that. They remember those people, so there’s a connection there.”

A longtime writer about soccer in St. Louis prior to his book on the city’s history with the sport published in 2011, Lange has seen much of the modern history of soccer in one of the nation’s hotbeds of talent. His research found competitive games dating back to 1875 at the Grand Avenue Ball Park through archived newspaper articles, although it can be presumed the sport had been played even longer ago than that thanks to a large immigrant community derived from the United Kingdom that settled in the region.

Unlike other cities where immigrants looked to assimilate and adopted American sports of the time, St. Louis continued its tradition of soccer in large part thanks to the city’s sizeable Irish community.

“In a lot of cities, the first wave of immigrant groups and their kids gravitated more to baseball and the more American-style sports,” said Lange. “In St. Louis, [soccer] was passed down from one generation to another, especially because there’s a very strong network of Catholic church parishes in St. Louis where the sport was brought in by the religious order that staffed some of the schools. Because of that, I just know from growing up you just played soccer as well as baseball and other sports. It wasn’t thought of as a foreign sport, it was thought of as a hometown sport. It’s part of the fabric of the city.”

That history resulted in success when St. Louis clubs first began to enter the National Challenge Cup, as it was known then. The 1920 win by Ben Millers – sponsored by the Ben W. Miller Hat Company – was the first edition of the tournament in which clubs from St. Louis took part, and St. Louis Scullin Steel claimed the title two years later, the second of three consecutive finals the club reached between 1921 and 1923. 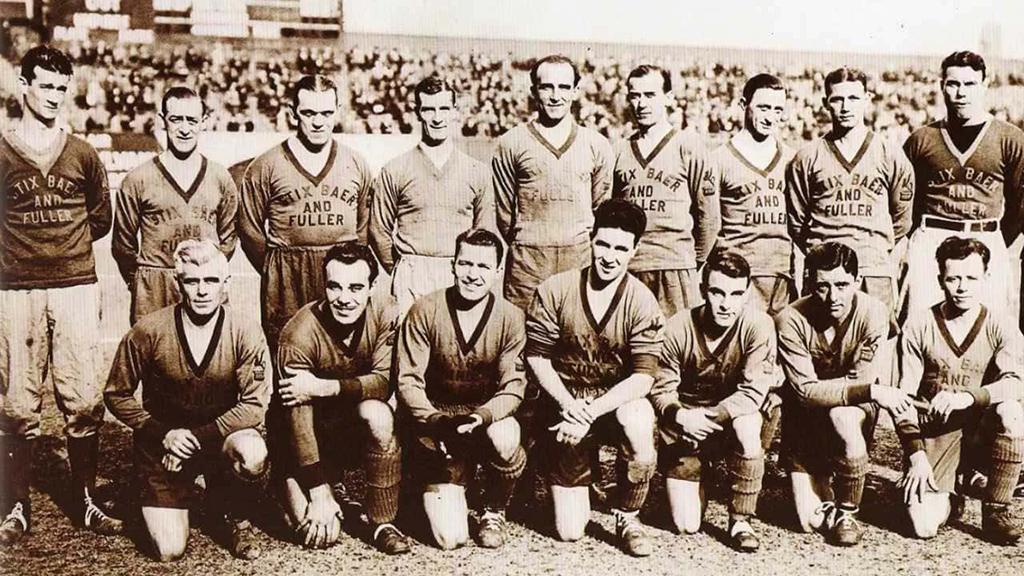 Stix, Baer and Fuller - sponsored by one of St. Louis' largest department stores - earned three titles in the Open Cup in the 1930s, making it the most successful club from the state of Missouri in the tournament's history. | Photo courtesy U.S. Soccer

In the 1930s, Stix, Baer and Fuller won three consecutive titles between 1933 and 1935, while Kutis S.C. and Keough – one of the heroes of the United States’ 1-0 win against England at the 1950 FIFA World Cup – took the title in 1957 in addition to six consecutive U.S. Amateur Cup victories between 1956 and 1961. According to Lange, the early St. Louis teams played a physical, long-ball style of game that occasionally led to fist fights spilling over during the action and in the stands between rival fans. It was in some ways symptomatic of the “Us vs. Them” mentality that has remained a hallmark of St. Louis soccer over the years against teams from around the rest of the country.

“In St. Louis it was a source of pride that it was a local brand of soccer that was played by kids who were brought up to play soccer,” said Lange. “When St. Louis started playing in the Cup competition in 1920 there was a lot of ‘Us vs. Them’ feeling, and that’s kind of run through soccer in St. Louis all the way through.”

There are numerous local players that are part of the current STLFC squad as well, with Fourth Round hero Tomas Gomez joined by defender Sam Fink and the academy signings that compete for the club from the same St. Louis Scott Gallagher Academy that itself many years ago entered its own senior side in the Open Cup.

“People like Tomas Gomez and Sam Fink, there’s still that local connection on the team and that connects with a lot of people,” said Lange. “As you know, the [NHL’s St. Louis] Blues won the Stanley Cup and one of their key players was a guy from St. Louis, Pat Maroon, so when there’s a local guy who plays a big role on the team like Saint Louis FC has, that even makes the connection even stronger.” 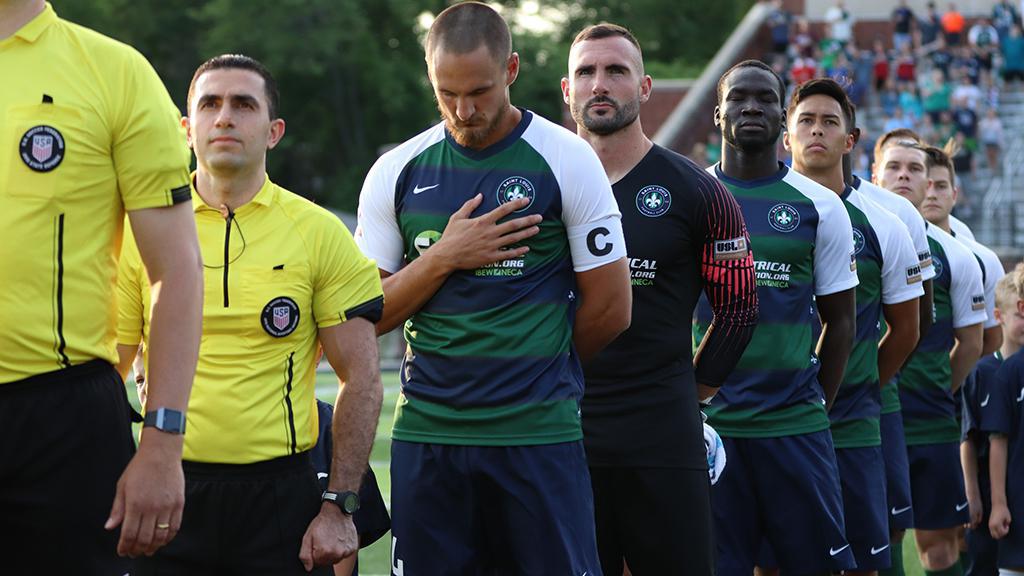 Saint Louis FC Captain Sam Fink and goalkeeper Tomas Gomez are among those that grew up playing soccer in the city, maintaining the local playing connection that has been a hallmark of St. Louis soccer for more than a century. | Photo courtesy Nick Dawes

After the excitement of the club’s victory against the Chicago Fire in the last round, which stood as STLFC’s first win against an MLS opponent in the club’s history, Saint Louis will get the chance to continue this year’s run in the Open Cup on Wednesday as FC Cincinnati visits the World Wide Technology Soccer Park. While the odds on STLFC replicating the success of its predecessors in lifting the trophy might be long, Lange and his contemporaries are certainly looking forward to another Open Cup night in the city.

“I’m looking for a tight, exciting game,” said Lange. “From the communication I’ve heard we should have a really good crowd for it. Hopefully the weather will cooperate because we’re in a bad spell with the rain and flooding and things like that, but I think we should have a great night backed by a passionate crowd.”