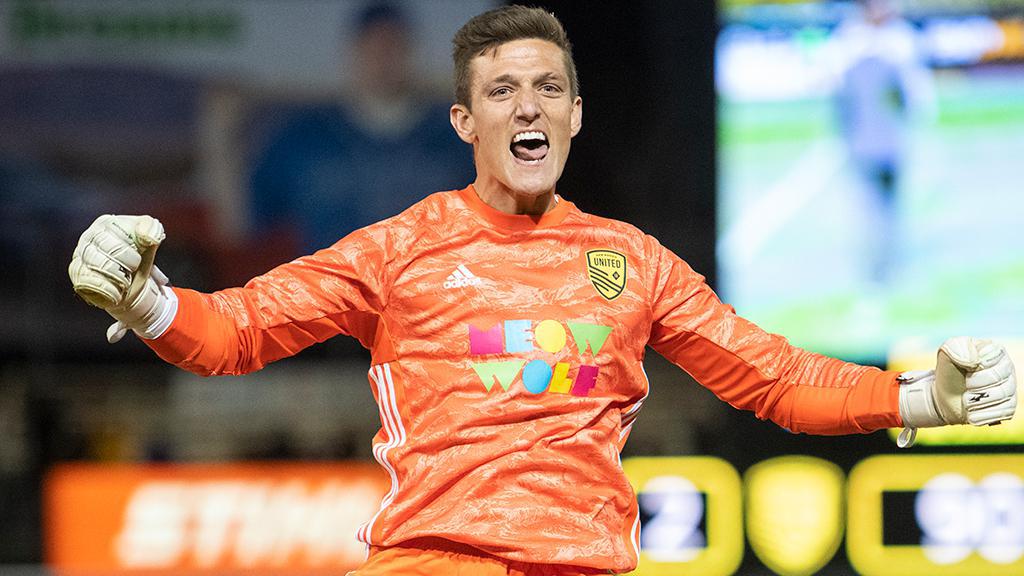 New Mexico United goalkeeper Cody Mizell made another save in a penalty shootout as his side advanced to the Round of 16 with victory against the Colorado Rapids on Wednesday night. | Photo courtesy Josh Lane / New Mexico United

COMMERCE CITY, Colo. – For a second time in the 2019 Lamar Hunt U.S. Open Cup, New Mexico United stared down the prospect of a penalty shootout.

For a second time, too, the USL Championship’s Western Conference leader prevailed, defeating Major League Soccer’s Colorado Rapids 4-2 after the sides had played to a 2-2 draw that had almost everything you could expect from a high-drama knockout clash.

The club’s now-famous front four of Kevaughn Frater, Santi Moar, Devon Sandoval and Chris Wehan all scored from the spot. Goalkeeper Cody Mizell produced another shootout save, this time denying the Rapids’ Danny Wilson in the second round before his Colorado teammate Sam Nicholson blazed his shot high over the crossbar in the fourth.

That opened the door for Wehan to clinch his side’s passage to the next round for the second time this tournament, and with a powerful finish to the top-left corner, the former University of New Mexico standout delivered a place in the Round of 16.

All that after it had appeared near the end of regulation that time was about to run out on the visitors. But then, it wouldn’t have been a United game in the Open Cup without extra time. New Mexico has gone the extra 30 minutes in each of its three ties in this year’s tournament, eliminating Phoenix Rising FC in a shootout in the Second Round before defeating Colorado Springs Switchbacks FC thanks to a penalty by Frater in extra time two weeks ago to secure this contest.

So, trailing by a goal with just a minute of stoppage time remaining in regulation, it was Frater’s turn again to strike. The Jamaican, who leads the USL Championship with 10 goals this season, picked up possession off a layoff by Sandoval 40 yards from goal and surged toward the top of the penalty area before unleashing a left-footed blast to the bottom-right corner that sent his teammates and the large travelling support led by The Curse wild and the game to an additional 30 minutes of play.

Up a man after the Rapids’ Axel Sjoberg had been sent off in the 72nd minute for his second yellow card, the visitors tried to be patient in finding another gap in the Rapids’ defense, but the best chance of the opening half of extra time fell to the hosts as a turnover allowed Nicholson to test Mizell with a curling shot that was comfortably saved.

New Mexico immediately showed more threat from the opening kickoff of the second half of extra time as Moar knifed through the defense only to have his shot from the left side of the penalty area deflected just wide by Rapids defender Lalas Abubakar. In the 109th minute, Chris Wehan had a shot from the top of the penalty area deflected wide of the left post for the visitors, and with five minutes to go Justin Schmidt couldn’t control a header at the back post off a corner from the left.

But there would be no decisive finish in the 120 minutes of action, as the last chance before the shootout fell to Moar in stoppage time, only for his low shot to be comfortably claimed by Irwin.

The Rapids won the toss and took first, and both Colorado’s Kellyn Acosta and Frater scored in the opening round. But then Mizell took center stage again, diving low to his left to deny Wilson’s shot. Moar gave NMU the edge as his shot to the same bottom-right corner found the net as Irwin dove the wrong way, and after Colorado’s Keegan Rosenberry and Sandoval exchanged goals in the third round the pressure ratcheted up higher.

It proved too much for Nicholson, whose shot while squarely hit flew high over the crossbar. That left Wehan to finish the job, which he did with aplomb.

The drama of the shootout ended what had begun with a dramatic opening. United had set an early marker as Daniel Bruce fired a shot to the top-right corner from the right side of the penalty area that Irwin had to turn aside, but off the ensuing corner kick the ball was recycled into the penalty area and fell to Sandoval, who buried his finish from close range to get United off to a perfect start.

Colorado’s first chance arrived two minutes later as Cole Bassett fired a low shot to the bottom-right corner that was turned wide by Mizell, while Moar forced a save from Irwin off a driven corner kick by Wehan in the 21st minute with a volleyed finish from 16 yards.

Bassett had a big chance for the Rapids on the half-hour mark as he made a good move to shake his marker eight yards from goal but could only fire over the crossbar as he looked to curl a shot to the top-right corner. The Rapids pulled level in the 35th minute, however, as Diego Rubio headed home from close range after Lalas Abubakar headed a free kick in front of the net from a long set piece.

Colorado took the lead just two minutes after the break as Nicolas Mezquida won a 50-50 ball just inside the penalty area and fired home into the top-right corner of the net. Mizell then had to make a pair of saves to keep out Mezquida and Johan Blomberg, but United had a chance to level in the 59th minute when Sandoval set up Moar for a half-volleyed finish at the top of the penalty area that went just high of the crossbar.

New Mexico looked to find a way to equalize as both Sandoval and Moar were both off-target with chances just past the hour-mark, but then the lifeline of an extra man arrived with 18 minutes to go when Sjoberg was dismissed after a foul on Frater. Despite that advantage, New Mexico’s first good chance up a man didn’t arrive until the 90th minute when a fine cross by Manny Padilla set up a powerful header by Sandoval that was just turned around the right post by Irwin.

But just as time looked as though it was about to run out on New Mexico’s inaugural Open Cup run, Frater had the last word in regulation, allowing Wehan to do the same in the shootout to send United on.