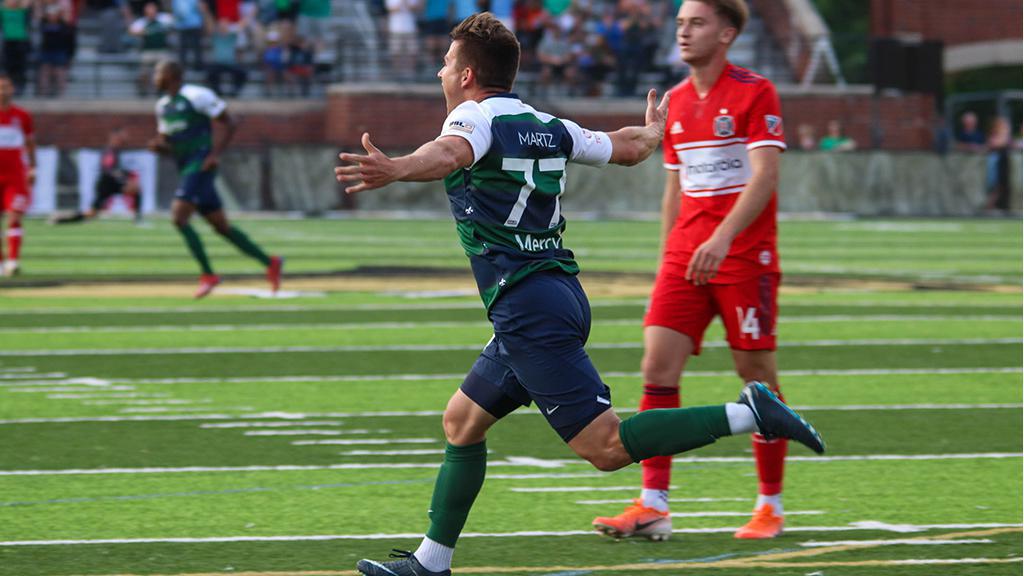 Austin Martz was among the goalscorers for Saint Louis FC as it advanced to the Round of 16 in the Lamar Hunt U.S. Open Cup for the first time with a 2-1 win against Major League Soccer's Chicago Fire. | Photo courtesy Nick Dawes / Saint Louis FC

ST. CHARLES, Mo. – Saint Louis FC advanced to the Round of 16 in the Lamar Hunt U.S. Open for the first time in its history on Tuesday night as Tomas Gomez recorded eight saves and first-half goals by Austin Martz and Guy Abend earned the side a 2-1 victory against the Chicago Fire at Harlen C. Hunter Stadium before a raucous crowd of 4,456 fans.

“I’m really proud of the players, I think the effort they put in tonight was immense and I think we played some good football,” said STLFC Head Coach Anthony Pulis. “I’m not just saying it, I genuinely believed that we could win the game tonight. I’m fortunate to work with a great group of players every day—their mentality is great—and I knew that if we played anywhere near where we are capable of individually and collectively that we would give Chicago a run for their money.”

The victory was STLFC’s first competitive win against a side from Major League Soccer in the club’s history and was punctuated by a stellar defensive display that began from almost the opening whistle. Gomez produced a remarkable triple-save in just the second minute as he denied Chicago’s C.J. Sapong, Nemanja Nikolic and Nicolas Gaitain in short order before his defense cleared the danger.

The visitors were the aggressor early and Sapong also threatened with a header in the 11th minute that went wide, but Saint Louis then took the lead on their first effort on goal as Russell Cicerone found space on the left and bent a perfect cross to the back post where Martz was on hand to head home.

Four minutes later the hosts doubled their lead via a free kick as Lewis Hilton’s in-swinging delivery from the left found Abend alone at the top of the six-yard area for a free header into the left corner of the net.

Gomez was called on twice late in the half to keep out efforts by Sapong and Raheem Edwards to keep Saint Louis two goals ahead at the halftime break, and then early in the second half STLFC defender Phanuel Kavita was well-positioned to clear a low cross after Gomez had come off his line to try and smother an initial chance for the visitors.

Gomez was called on again to come up big in the 56th minute with a diving save to keep out Fabian Herbers’ effort from the right side of the penalty area. Saint Louis’ first real look at goal of the second half came 10 minutes later when Paris Gee’s effort from 20 yards went wide of the right post, but a set piece from Hilton almost brought a third for the hosts moments later only for a flicked header by Caleb Calvert to be tipped onto the right post by Fire goalkeeper Kenneth Kronholm.

The Fire were awarded a penalty kick when United States international Djordje Mihailovic was ruled to have been brought down in the area by Saint Louis’ Bradley Kamdem Fewo, and Nikolic converted clinically with a shot to the top-right corner that was beyond Gomez’s reach.

The goal spurred the Fire on, but Saint Louis’ defense was resolute in defending its lead. Center backs Sam Fink and Phanuel Kavita both recorded nine clearances on the night as the Fire delivered 42 crosses in all, but as time wound down the game became choppier, playing into the hands of the hosts, and after five minutes of stoppage time produced just a pair of blocked shots from the visitors, Saint Louis had made history.

HOUSTON DYNAMO 3, AUSTIN BOLD FC 2: Austin Bold FC gave the defending Open Cup champion Houston Dynamo all they could handle in the second half at BBVA Compass Stadium, but came up on the short end of the result as the Dynamo’s first-half lead proved enough to advance.

The USL Championship expansion side carved out the first chance of the contest as Kleber found space in the center of the box but couldn’t get enough power behind his right-footed shot to beat Houston goalkeeper Tyler Deric. The Dynamo took the lead in the 14th minute as Marlon Hairston’s initial shot was blocked by a Bold FC defender but Tomás Martinez fired the rebound into the bottom-left corner with a first-time effort from just outside the penalty area.

Houston doubled its advantage just after the half-hour mark when veteran left back Demarcus Beasley played Martinez in behind the Austin defense and he squared the ball across to Ronaldo Peña for the forward to finish into the empty side of the goal. The Dynamo added a third goal five minutes before the break when Matias Vera played a give-and-go with Peña before avoiding a sliding challenge and slotting the ball past Bold FC goalkeeper Diego Restrepo from close range.

The Championship side responded just three minutes after halftime when Xavier Baez’s long-range free kick took a wicked deflection on its way into the back of the net, leaving Deric with no chance. Austin continued to apply the pressure as Sonny Guadarrama played Isaac Promise in on goal, but the halftime substitute’s touch took him too wide to get a shot on target. However, Promise delivered Bold FC’s second goal in the 58th minute when he swept home a rebound at the back post after Deric had made a strong diving save to deny Demar Phillips’ left-footed drive from 20 yards out.

Baez nearly benefited from another deflection two minutes later, but his volley off the back of a Dynamo defender just spun wide of the top-left corner. Martinez missed a chance to kill the game off in the first minute of stoppage time, but Houston wouldn’t need an insurance goal as Deric held onto Promise’s stinging volley from distance in the game’s final seconds to see the Dynamo into the Round of 16.

COLUMBUS CREW SC 1, PITTSBURGH RIVERHOUNDS SC 0: Pittsburgh Riverhounds SC’s run in this year’s Open Cup came to an end at MAPFRE Stadium as former Lamar Hunt U.S. Open Cup champion Columbus Crew SC advanced to the Round of 16 thanks to a second-half goal by David Accam.

Chances were few and far between in the first half, with arguably the best falling to the Hounds when Anthony Velarde was brought down just right of center outside Columbus’ penalty area. Kenardo Forbes fired a shot against the grain toward the bottom-left corner, but it curled wide of Crew SC goalkeeper Jon Kempin’s post.

Pittsburgh held firm until 10 minutes into the second half when Crew SC produced a fine move to take the lead. After a sustained period of pressure, Connor Maloney played a pass into the right channel 30 yards from goal for Pedro Santos, who quickly turned and floated a cross into the center of the penalty area that was volleyed home by a cutting David Accam into the bottom-left corner of the net.

Crew SC had the chance to add to its lead when it was awarded a penalty kick when Patrick Mullins was brought down in the area just past the hour-mark, but Santos fired his shot off the crossbar to keep it a one-goal game. Despite the miss, however, Columbus was rarely threatened by the Hounds down the stretch as it advanced to the next round.

David Accam scored the only goal of the game to see @ColumbusCrewSC past @RiverhoundsSC to become the first team to book passage to the 2019 Round of 16.#USOC2019 | Highlights pic.twitter.com/2ZlziywthC