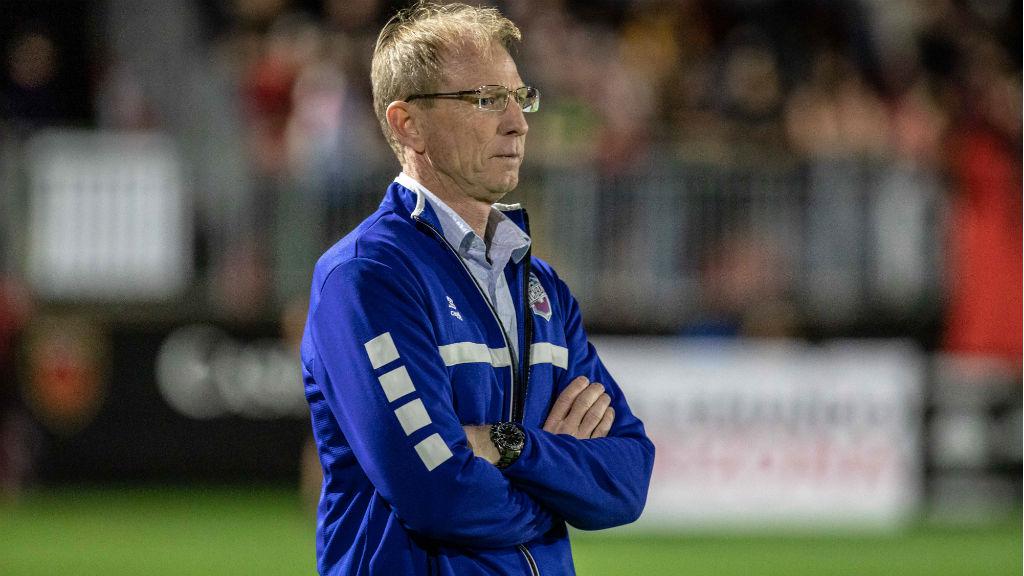 There’s no denying it’s been a tough couple of months for Colorado Springs Switchbacks FC.

After winning two of its first three games of the 2019 Championship campaign, the Switchbacks have picked up just two points from their last nine contests (0-7-2) and enter this weekend sitting at the bottom of the Western Conference standings.

With the club currently poised to miss out on the postseason for the third consecutive year, it comes as no surprise that the speculation around Head Coach Steve Trittschuh’s job security has started to heighten. In fact, even the man who has led Colorado Springs since its inaugural season in 2015 is brutally honest about the situation.

“I’ve told them that if they need to make a change, go ahead and make a change,” Trittschuh said recently. “I do have two years left on my contract and just for me, I can’t worry about that. There are people around here, they just speculate. They have no idea what this club is, what the resources are, what we’re about and I do. And so, it’s just a reality that I have to deal with. I can’t worry about if I’m going to get fired or what, I’ve just got to keep going game-by-game and have the players prepared.”

If you watched the Switchbacks’ performance in the Lamar Hunt U.S. Open Cup against New Mexico United on Wednesday night, you could tell that Trittschuh is still holding up his end of the bargain.

Colorado Springs put on an inspired display against the Western Conference leader and held a 1-0 lead into the late stages of the match thanks to Jordan Burt’s 52nd minute goal. But in a way that sums up the club’s recent run of form, the Switchbacks couldn’t quite hold on as Chris Wehan levelled the contest with three minutes remaining and Kevaughn Frater’s penalty kick in extra time sent the visitors through to the Fourth Round with a 2-1 win.

FT in the Wild West!@NewMexicoUTD makes an impressive comeback to take the win over @SwitchbacksFC!

While the performance against New Mexico may serve as a springboard for a turnaround, Trittschuh says he started to see signs of improvement in last Saturday’s 1-0 loss at OKC Energy FC.

“I thought we played pretty well in OKC and into this game it kind of helped playing New Mexico maybe a week or so ago,” said Trittschuh. “We learned a few things in that game, and we changed a few things last night and it really worked until we’ve given up a late goal like that. I hate to say it, but it came down to tired legs. Guys were just tired, and I had nothing of real quality to be able to put into the game to close the game out.”

That lack of roster depth – which was evident by an Academy player like Alejandro Padilla coming off the bench in extra time of Wednesday’s match as a last roll of the dice – has been an issue for the Switchbacks, especially as they encounter a busy period in their schedule. Saturday’s home contest against Fresno FC will mark the club’s third game in eight days and already tired legs will be put to the test against another one of the top teams in the West.

Despite the club’s poor run of results and the inability to rotate his squad to his liking, Trittschuh believes his players are 100 percent committed to the cause and are locked into his game plan.

“I can see there’s a spark there,” said Trittschuh. “Guys were feeding off what we did over the weekend at OKC and we took it into the game last night and we did really well.

“They’re all self-motivated, they’re all good professionals and even now there’s sometimes I’ve got to stop them from doing too much in training just to save their legs for the game. It’s a great group of guys and they’re not giving up even though the results aren’t there.”

Despite failing to win any of their last nine contests in league play, the Switchbacks sit just eight points outside of a playoff place and nine points behind sixth-placed Tulsa Roughnecks FC. With 22 games remaining on the schedule, there is still plenty of time for Colorado Springs to climb back up the table.

“It’s going to help if we do get some results in the next few weeks, cause it’s still a tight race, it’s still early, and so a few wins can get us right back into it,” said Trittschuh. “So, we’ve got to keep positive and keep doing what we’ve been doing and keep trying to improve every game.”

Trittschuh isn’t the only coach heading into this weekend’s contests hoping for a reversal of fortune. Pressure could also be starting to mount on San Antonio FC Head Coach Darren Powell, whose side has lost all five of its league matches away from home this season as it heads to face Sacramento Republic FC on Saturday.

With the season one-third over and clubs like Colorado Springs and San Antonio sitting on the wrong side of the playoff line after missing out on the postseason in 2018, though, it seems the warmer weather is starting to produce some hot seats in the Championship’s coaching ranks.

But despite the rise in temperatures, it appears Trittschuh and company are – for now, at least – staying cool.