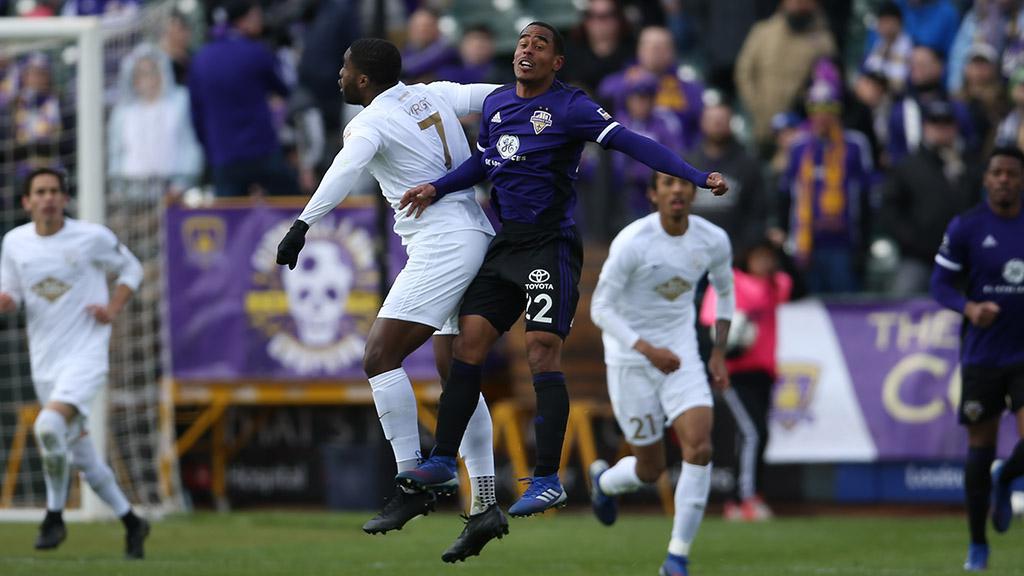 Louisville City FC and Birmingham Legion FC have split their two meetings in the Championship this season ahead of their meeting in the Lamar Hunt U.S. Open Cup on Wednesday night. | Photo courtesy Em-Dash Photography / Louisville City FC

The Third Round of the 2019 Lamar Hunt U.S. Open Cup kicks off on Tuesday night as 19 remaining USL Championship clubs look to advance to the Fourth Round in June and a matchup with an opponent from Major League Soccer. Eight of the 11 games over the next two days will feature all-USL Championship matchups, with one interconference meeting and another intriguing clash between a club from the Championship and USL League One also on the slate.

Here’s a look ahead at what’s in store.

The only contest to feature cross-conference competition between USL Championship clubs kicks off the round as OKC Energy FC – which sits in fifth place in the Western Conference – plays host to the lone remaining undefeated side in the Championship this season in the Tampa Bay Rowdies on the campus of Oklahoma University. The Rowdies are undefeated in 13 games this season, including a comfortable 4-1 win against USL League Two’s Villages SC in the previous round. Energy FC also ended up with a comfortable 3-1 victory against NTX Rayados in the Second Round, while both sides are coming off a 1-0 victory in their last league outings on Saturday.

The Open Cup brings together Louisville City FC and Birmingham Legion FC for the third time this season after both won on opposing soil in the two league contests previously played this season. Birmingham took victory at Slugger Field when the teams first met, which also served as the first victory in Legion FC’s history, but LouCity took revenge more recently at BBVA Compass Field with a 3-0 win that began its current three-game league undefeated streak. Louisville also won 3-0 in the Second Round of the Open Cup against USL League Two’s Reading United AC, while Birmingham defeated West Chester United SC 4-1 to advance in its first Open Cup contest. With Louisville aiming to replicate its deep run in the tournament last season, Legion FC could need a big road display to repeat its previous victory against the two-time defending USL Cup champion.

North Carolina FC will look to carry a strong start to the Championship season into its clash with the best story of the Open Cup this season in the Florida Soccer Soldiers when the sides meet in North Carolina. NCFC is in fourth place in the Eastern Conference under new Head Coach Dave Sarachan after defeating the New York Red Bulls II last Friday night and swept to a 4-1 win against USL League One’s Richmond Kickers in the previous round. The Soccer Soldiers – among whose alumni are current Tulsa Roughnecks FC standout Rodrigo da Costa – have already advanced past Championship opposition in the Second Round, however, having defeated the Charlotte Independence in a penalty shootout after coming back from a pair of deficits in regulation and extra time. That performance should have NCFC on alert as they look to avoid an upset.

Two teams looking to return to the Fourth Round of the Open Cup for the first time after a multi-year absence will square off on the banks of the Monongahela River as Pittsburgh Riverhounds SC hosts fellow Championship club Indy Eleven. The Hounds are looking for their first trip to the Fourth Round since 2015 and enter the game undefeated in their last eight league games, but Pittsburgh has drawn four in a row after a 0-0 result against the Charlotte Independence on Saturday. Indy last reached the Fourth Round in 2016 and is back in the Third Round after being eliminated in the previous round in the past two seasons. Also on a solid run of form, Indy hasn’t given up a goal in its last four league outings, and also shut out USL League Two’s Dayton Dutch Lions FC in the Second Round of the Open Cup two weeks ago.

With both teams well below the playoff line in their expansion Championship seasons, the Open Cup offers both Memphis 901 FC and Hartford Athletic a chance at glory this season as they meet for the second time this campaign. 901 FC took a 2-1 victory when the teams first met in Hartford on May 10 at Rentschler Field, a win that is part of Memphis’ current three-game undefeated streak in Championship play. The Athletic have rebounded from that loss, however, and are on a three-game undefeated run in all competitions that included a Second-Round win against the New York Cosmos B that served as the club’s first win in its history and a subsequent 2-1 win against Loudoun United FC. With a chance at facing an MLS side on the line, this game should have some added intensity to it.

Saint Louis FC will play host to the lone USL League One side to reach the Third Round as it looks to reach the Fourth Round for the third time in its history. STLFC has lost only once in 10 games so far in the USL Championship season, sitting in fifth place with games in hand on the teams above it in the Eastern Conference, but needed a penalty shootout to advance past USL League Two’s Des Moines Menace on the road in the Second Round two weeks ago as Academy signing goalkeeper Patrick Schulte came up big. Madison took one of the most impressive wins of the Second Round as it went on the road and defeated the Championship’s El Paso Locomotive FC 3-0 using a fast, counter-attacking style to great effect, but if STLFC fans are looking for a good omen, their side has advance to the Fourth Round in every odd year of the club’s existence.

The two Texas rivals meet for the second time this season at Bold Stadium with Austin looking to continue its run after suffering its first home setback of the season and San Antonio looking to find any success on the road at all. Bold FC had gone undefeated in six games in all competitions to open up its 5,024-seat venue at Circuit of The Americas until this past Saturday when New Mexico United took a 3-1 victory against Head Coach Marcelo Serrano’s side. Austin did take a 1-0 win against San Antonio in its home opener this season, however, a result that fit into SAFC’s poor road form this season that has seen the side lose all five games on its travels this season after a 3-1 setback to Rio Grande Valley FC on Saturday night. Having reached the Fourth Round in two of its previous three seasons, San Antonio will be hoping it can draw on previous Open Cup experience to advance once again.

Nashville SC will aim to end a sequence of eight games in 25 days on a high note as it hosts the Charleston Battery on the campus of Middle Tennessee State University. NSC is undefeated in its last four league games after recording back-to-back shutouts in the past week to move into second place in the Eastern Conference, but had to withstand a solid performance in the Second Round at the same venue against USL League Two’s South Georgia Tormenta FC 2 to come away with a 3-2 victory. The Battery remain in solid contention for a ninth consecutive USL Cup Playoffs berth but are winless in their last four outings in league play as they head to Tennessee. Charleston has already defeated Nashville once this season, 3-1 on April 20 at MUSC Health Stadium, and with the club’s strong tradition in the tournament will go on the road hopeful of victory.

Two teams at opposite ends of the Western Conference square off when Colorado Springs Switchbacks FC play host to current conference-leader New Mexico United. NMU has been arguably the best story in North American soccer this season with large crowds cheering on a successful expansion season for Head Coach Troy Lesesne’s side, and a matchup with an MLS side would be one of the big games of the Fourth Round should United find a way to repeat its 3-1 victory at Weidner Field just over a week ago. That performance saw NMU’s Kevaughn Frater record a hat trick against his former club and added to the struggles the Switchbacks have experienced recently with five consecutive league defeats. Colorado Springs will be hoping the Open Cup can offer a fresh chance for success as it looks to reach the Fourth Round for the first time since 2016.

Las Vegas Lights FC will try to defend its undefeated record at Cashman Field this season when it hosts amateur side Orange County FC in a contest that will see Head Coach Eric Wynalda square off against former United States Men’s National Team teammate Paul Caligiuri on the opposite sideline. OCFC advanced in a penalty shootout against the Championship’s Orange County SC in the previous round but could face a bigger challenge against a Lights FC side that is 5-0-2 in all competitions at Cashman Field this season after taking a 2-0 victory against Cal FC in the Second Round of the tournament. Sammy Ochoa and Victor Rojas scored in that contest, but Lights FC has been led overall by Irvin Parra, who has seven goals and three assists in the league this season.

The second edition of the Highway 99 Derby this season arrives in the first meeting between Sacramento Republic FC and Fresno FC in the Open Cup, with Republic FC looking to maintain its stellar record in the tournament at the expense of its northern California rival. Republic FC has advanced to the Fourth Round of the Open Cup in four of its first five seasons and has reached the Fifth Round in each of the past two seasons. This year has been more up-and-down in the league for Head Coach Simon Elliott’s side, however, with Sacramento in 14th place after losses in three of its last four games in the league. The Foxes, meanwhile, are sitting pretty in third having lost just once in their opening 11 regular-season games. That loss, though, was on home turf against Republic FC, an indicator of how contests between these two rivals always seem to find an added element.