FRESNO, Calif. – Positioned in the logjam of teams in the middle of the Western Conference, but having played only nine regular-season games going into Wednesday night’s home contest with Austin Bold FC, Fresno FC Head Coach Adam Smith wanted to make sure his side was aware of how critical earning all three points were before it took the field at Chukchansi Park.

Thanks to Qudus Lawal’s goal with six minutes to go, the Foxes did just that.

A 1-0 win against fellow USL Cup Playoffs contender Austin – which itself had the chance at a big move up the Western Conference standings with a victory – elevated Fresno into second place in the table and continued a season that has seen the Foxes take a major step forward.

So why the amplified focus for a midweek early-season contest? The truth of the matter is, last year, this result might not have arrived. Fresno finished tied for the second-most draws (12) in the West in 2018, half of which came on home turf as it regularly left points on the table to sit well outside the playoff picture.

It could have happened on Wednesday night against Austin as well, as chances were squandered throughout the first half. Officially the hosts had eight shots, but other chances like a one-on-one for Christian Chaney that went astray after a heavy touch when the forward was through on goal left the Foxes without a lead they should have held.

“The game should have been over at halftime really,” said Smith. “We had several chances in the first half and I felt we could have been two or three up and enjoyed a nice, easy second half, but we didn’t take the chances.”

But this is a new season for the Foxes, and the new pieces in the club’s attack are coming through in clutch situations. Lawal’s fourth goal in the past three games – an immaculately redirected header that caromed in off the underside of the crossbar after the Nigerian forward had torqued his body in the middle of the penalty area – came off an assist by Diego Casillas, who had logged just 114 minutes previously this season.

Entering the game after Jackson suffered what appeared to be a leg injury late in the first half, Casillas’ first moments didn’t bode well. A misplaced cross shortly after his introduction sailed behind the goal, landing just in front of a boisterous Fresno Fire Squad, and he completed only 11 of 21 passes for the game.

But when his side needed him most, he came through with just what it needed after a great piece of play by Lawal gave him the chance to deliver from the left. The return cross might have been slightly behind the Nigerian, but it gave Lawal a chance, and with the way things have been going for Lawal lately, that was all he needed. 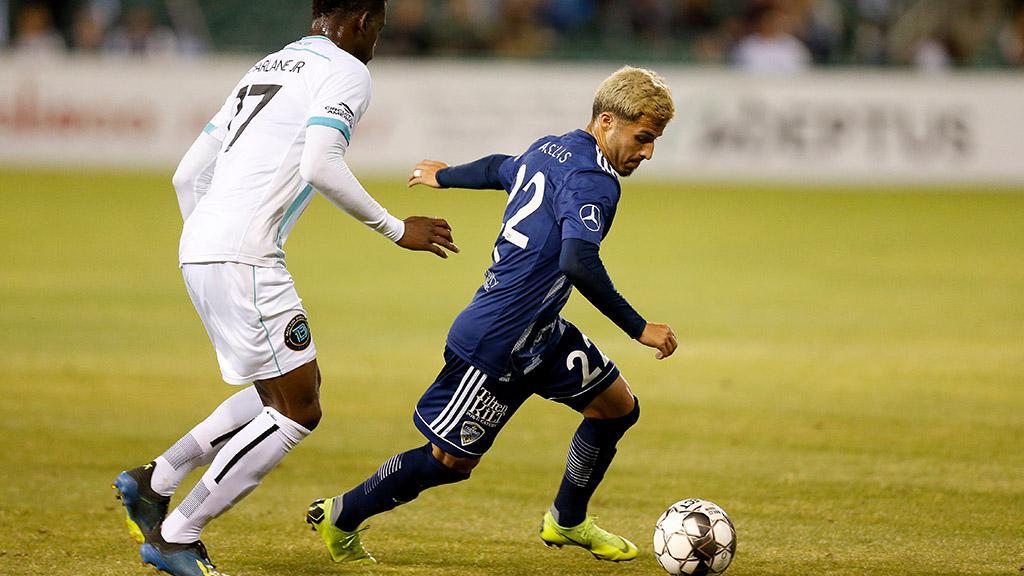 For a while it was looking like it wasn't going to be Diego Casillas' night for Fresno FC, but then he delivered the assist on Qudus Lawal's winner with six minutes to go. | Photo courtesy Kiel Maddox / Fresno FC

“The good thing is we were patient, and I asked the players to be patient, asked them to persevere,” said Smith. “I said we’d wear them down. They’ve had a lot of travel and games as well when we didn’t play at the weekend as well. We knew that would be in our favor, and I don’t care how they go in, but it went in and we’ve got the points and it’s nice to win another one at home.”

Still sitting with two games in hand, the Foxes can now take aim at usurping New Mexico United, which now sits just two points clear at the top of the Western standings. A visit to Tacoma this Sunday afternoon is up next, followed by a trip to currently struggling Colorado Springs Switchbacks FC, both opportunities for Fresno to burnish its credentials as a USL Cup contender.

“It’s really nice to see Fresno in second place,” said Smith. “It’s one knocked off and then we’ve got two more games in hand that we’ve got to win, and if we get those points things will be looking really good.”

With a chance to now separate from the middle of the pack, the Foxes are hungry for more.