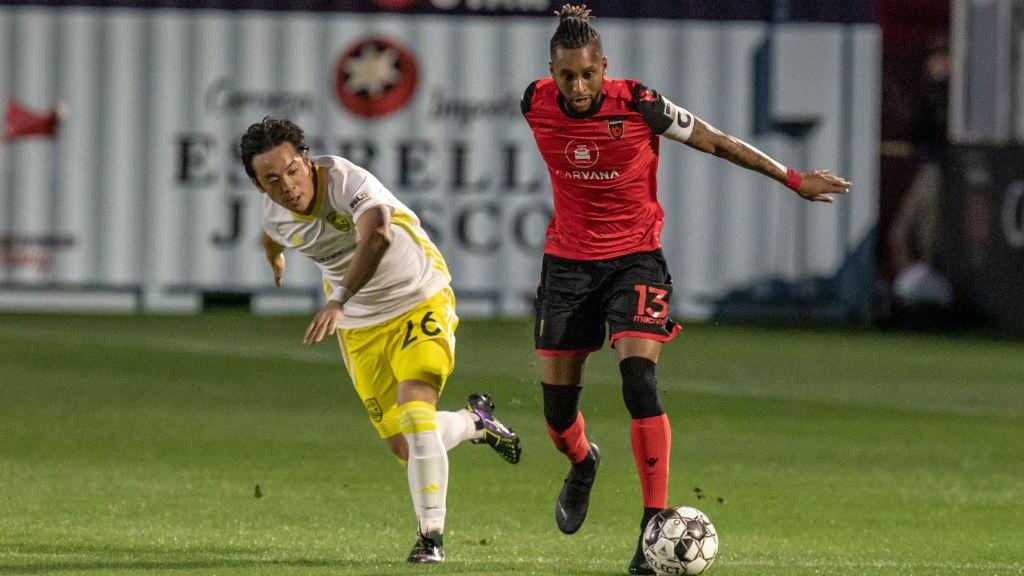 PHOENIX – Cody Mizell saved the day for New Mexico United as the veteran goalkeeper made the game-winning stop in the fifth round of a penalty shootout to help his side earn a 2-2 (4-3) victory over Phoenix Rising FC in the Second Round of the Lamar Hunt U.S. Open Cup on Wednesday night at Casino Arizona Field.

The visitors had a great chance to take the lead in the opening minutes of the contest but were stymied by Phoenix goalkeeper Carl Woszczynski, who produced a fantastic double save to deny New Mexico forwards Kevaughn Frater and Santi Moar in a pair of one-on-one opportunities. Rising FC worked its way back into the contest midfielders José Aguinaga and Junior Flemmings tested Mizell with efforts from outside the box two minutes apart, but the NMU goalkeeper was up to the challenge as the teams went to the half scoreless.

Phoenix finally opened the scoring from the penalty spot in the 65th minute, with Flemmings hesitating during his run up before beating Mizell to the bottom-right corner after NMU right back Ethen Sampson was adjudged to have tugged on Amadou Dia’s shirt in the box.

The visitors responded to the questionable call 14 minutes later as Josh Suggs picked out fellow substitute Devon Sandoval, who headed past Woszczynski into the top-right corner to level the proceedings with what seemed like his first touch of the match. Rising FC pushed for a winner in the final stages of regulation as defenders A.J. Cochran and Joseph Farrell forced saves out of Mizell with close-range headers from the center of the box, but the contest went to extra time. New Mexico took its first lead of the match five minutes into the extra session when Santi Moar’s shot from 30 yards out deflected off Sandoval and past a helpless Woszczynski into the back of the net.

The home side responded straight away as Kevon Lambert’s deflected effort forced a save out of Mizell in the 101th minute and moments later Adam Jahn found the back of the net with a right-footed blast into the top-left corner for his fourth goal in three games across all competitions. Phoenix substitute Solomon Asante tested Mizell with a shot from the right edge of the area just before halftime of extra time and Ryan Williams forced a pair of stops out of Woszczynski shortly after the break, but neither side could break the deadlock again to avoid a penalty shootout.

The first five shooters converted their attempts before Dia and Suggs saw consecutive efforts saved to keep things on level terms. Phoenix's Ben Spencer and New Mexico's Justin Schmidt found the back of the net to pile the pressure on Cochran in the bottom of the fifth frame and Mizell guessed the right way and palmed the ball away to send New Mexico into the Third Round, where it will travel to face Colorado Springs Switchbacks FC at Weidner Field on Wednesday, May 29.