TAMPA, Fla. – Indy Eleven goalkeeper Evan Newton has been voted the USL Championship Player of the Week for Week 9 of the 2019 season. The veteran goalkeeper recorded back-to-back shutouts against the Tampa Bay Rowdies and North Carolina FC over the week, which made him the league’s all-time regular-season leader in shutouts with 41 for his career. 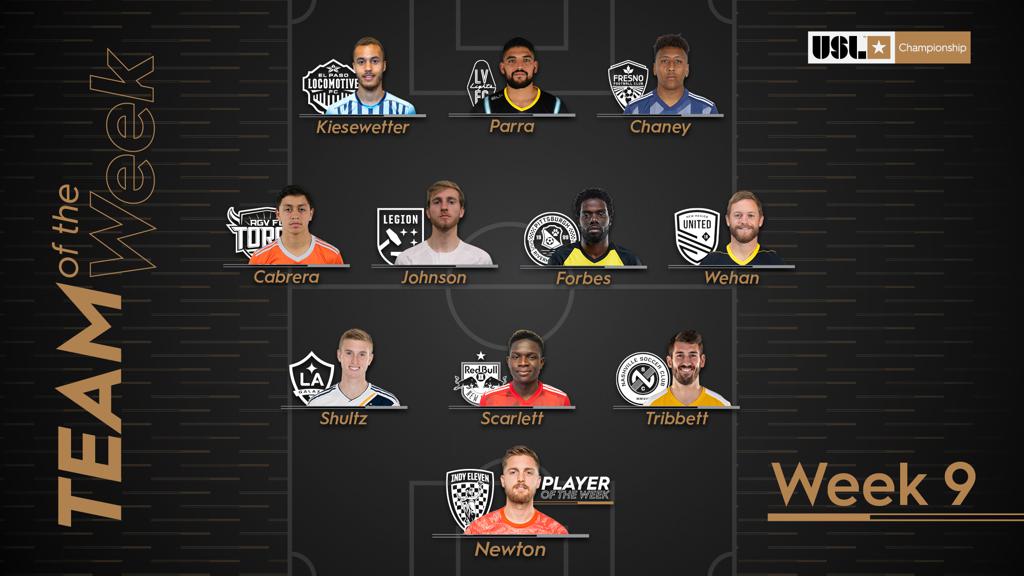 GK – Evan Newton, Indy Eleven: Newton recorded back-to-back shutouts to help the Eleven take a pair of points against the Tampa Bay Rowdies and North Carolina FC, while also moving into first all-time in regular-season shutouts in the Championship’s history with 41 overall.

D – Ken Tribbett, Nashville SC: Tribbett went a perfect 6 of 6 in duels and 4 of 4 in aerial duels while recording four clearances and two interceptions in Nashville’s shutout victory against ATL UTD 2.

M – Wilmer Cabrera Jr., Rio Grande Valley FC: Cabrera scored the opening goal, finished with two shots on goal and had one key pass as the Toros took victory on the road against the Portland Timbers 2.

M – Kenardo Forbes, Pittsburgh Riverhounds SC: Forbes had a goal and assist, completed 42 of 59 passes, made 12 recoveries and won 8 of 11 duels in the Hounds’ 2-2 draw with Charleston.

M – Chris Wehan, New Mexico United: Wehan struck twice in four minutes in the second half to send New Mexico to victory against San Antonio FC in front of 15,023 fans at Isotopes Park.

F – Christian Chaney, Fresno FC: Chaney scored a pair of goals as the Foxes continued their undefeated start to the season with a 4-2 victory on the road against Real Monarchs SLC.