HARTFORD, Conn. – Hartford Athletic Head Coach Jimmy Nielsen had envisioned what it was going to be like when his side stepped out for the first game of its inaugural USL Championship season.

On Saturday night at Pratt and Whitney Stadium at Rentschler Field, the crowd of 11,346 fans that welcomed the Athletic officially to the city did not disappoint in the slightest.

“I was not surprised. I was impressed,” said Nielsen. “You know, it's a very diverse city with people from all over the world here, but everyone has a connection to the game. And it was lovely to feel the support out there. And the energy from the fans, it was amazing, you know, it’s a highlight when the schedule came out May 4, you know, for me personally, I thought it was amazing.”

Led by the 2nd Regiment and the 19th Regiment, standing out in the supporters’ section with an array of No. 19 jerseys as the two groups led the chants and drums that echoed around the historic stadium, the atmosphere helped lift Hartford to its first point of the season in a 1-1 draw with the Charlotte Independence that saw the hosts push everything they had to finding their first win of the season.

As has been the case for Hartford over the first two months of the campaign, it certainly didn’t come easy. Just three minutes in the Independence had the lead as Abdoulie Mansally was the recipient of an unselfish piece of play by Dominic Oduro to set up a simple opener.

But eight minutes later there came the response, with Massachusetts native Mac Steeves the man to bring the crowd to its feet as he notched the first goal for the Athletic on their home turf, and his first goal in the professional ranks.

“Obviously getting the first point I think is more important to me than anything,” said Steeves. “But, it's my first professional goal as well, so I think that's it's definitely a positive step for me and happy to have gotten the goal and gotten a result.” 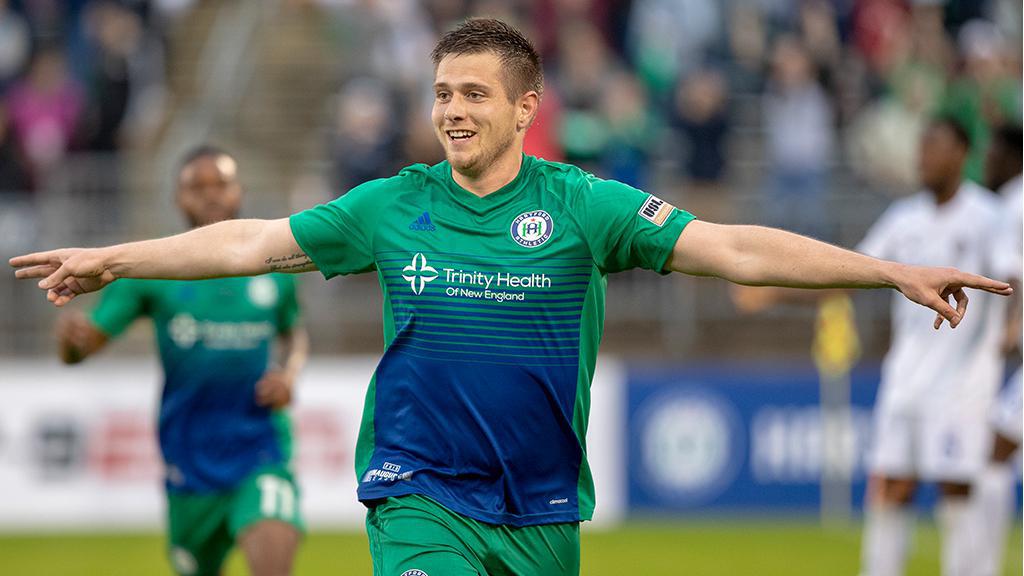 There would be chances for the Athletic to take the lead, arguably the biggest falling to Steeves in the 62nd minute when he couldn’t find the target on a first-time shot at the near post after a low cross from the right by Jonathan Brown. But as the side began to tire in the final stretch of a high-energy contest, the fans were there to try and push Hartford’s players over the finish line.

“Big credit to the supporters to feed off the guys with the energy, they were tired,” said Nielsen. “In the end, both teams were tired. We could have subbed out another four or five guys if we're allowed. But the rule is, unfortunately, only three. But they worked their butts off out there today. I'm not saying here we get to sit here and celebrate because we tied with Charlotte at home. But it's a massive step in the right direction.”

As big as earning the first point in club history was on the night, though, what was bigger was the specialness of the occasion. For Connecticut native Nicky Downs, who made his second consecutive start on the night, there was a sense of the surreal in being part of a historic night at such a historic venue.

“I mean, honestly, it was a surreal experience to be to be at Rentschler and in front of so many fans and then my home state it was you know, it definitely felt surreal,” said Downs. “Once the whistle blows you get into the game pretty quickly and it's just another soccer game. Obviously, the energy from the crowd was huge, and it gave us a boost. You know, special, special feeling, but you know, at the end of the day it was you know, you just play it like normal soccer game or anything else.”

Hartford Athletic welcomed 11,346 fans to Rentschler Field on Saturday night for its inaugural home opener against the Charlotte Independence.

The work for the Athletic now will be to give the fans reason to return, both to Rentschler Field starting this Friday night when the club hosts fellow expansion side Memphis 901 FC and throughout the summer as its permanent home at Dillon Stadium opens.

“I think it's important for the fans to see how much we care and how much we put into these games, and to be able to put together 90 plus minutes of just heart and battling sweat,” said Steeves. “It shows the fans how much we care, and I feel like that's the best we can do, if we can give it all of our effort. And 110 percent every time, I think that'll keep them coming.”

A historic night at a historic venue, the emotions everyone felt on Saturday was enough to give Hartford’s staff and fans a small opportunity to celebrate.

“This was a small, small little thing, but a big step in the right direction,” said Nielsen.