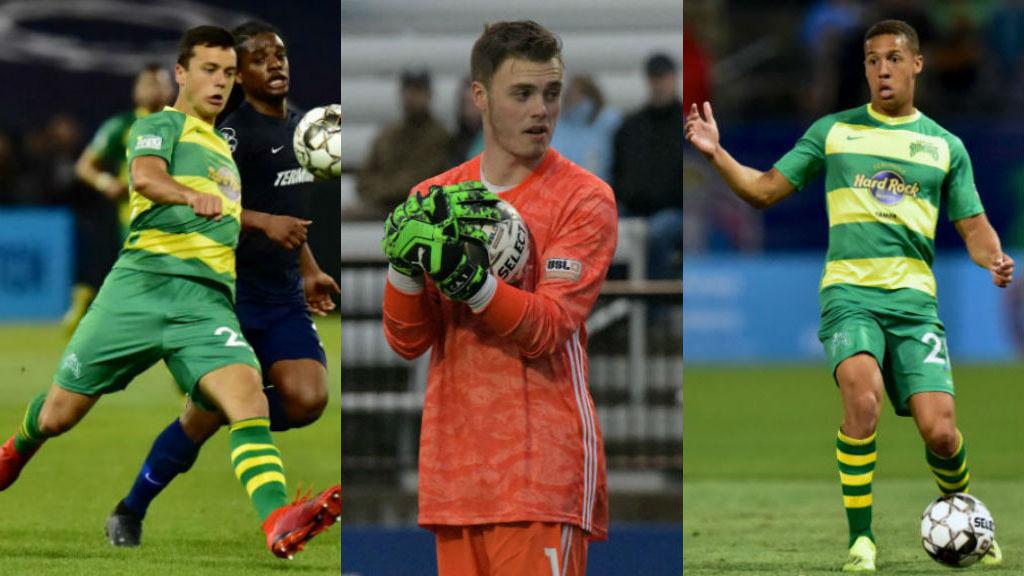 When Jordan Doherty and Caleb Richards learned they would be crossing the Atlantic Ocean to spend the 2019 USL Championship season on loan with the Tampa Bay Rowdies, the youngsters felt a mix of emotions ranging from shock to enthusiasm and everything in between.

“When I found out, my agent had rang me and I originally I thought he was kind of joking around and stuff because he rang me and said, ‘how would you feel about going to play in Tampa for 10 months?’” recalled Doherty, who joined the Rowdies from EFL Championship side Sheffield United FC. “But then when I kind of came to the realization that it was happening, I was super excited and just had to go for it.”

“I was a little bit nervous for the first day or so, because I was thinking I’ve got to move away for like 10 months or whatever,” said Richards, who joined from Tampa Bay’s EFL Championship partner Norwich City FC. “But I was more excited.”

While the opportunity to come across the pond in pursuit of first-team experience was too much to pass up for the 20-year-old Richards and 18-year-old Doherty, the move approximately 4,000 miles away from friends and family was still a daunting one. However, upon arriving in Tampa Bay for preseason training, the duo quickly figured they weren’t alone.

They had each other.

“I think whenever you’re coming to a new place, you’re kind of anxious at the start. You don’t know what it’s going to be like, what the people are going to be like, especially so far away from home,” said Doherty. “So, it was nice you know, me and Caleb, quite similar backgrounds in terms of football and we’ve both lived away from home, so we kind of clicked as we met and we’ve got on ever since. It’s been really good to have someone in a similar situation to do stuff with and speak with.”

While they do have their differences – Richards is English and Doherty is Irish – the pair have hit it off from the jump. They live together, spend their free time exploring their new surroundings together and even apparently make quite the vocal duet.

The Rowdies players and staff found that out on the opening weekend of the season, as Doherty and Richards performed the song “Breaking Free” from “High School Musical” as part of an initiation ceremony during the club’s road trip to Memphis.

“Yeah, that was a good performance,” said Doherty. “I’ve still got the video on my phone. We had a couple rehearsals at home and in the hotel and then I think we nailed it really on the day. That was kind of the beginning of the friendship.” 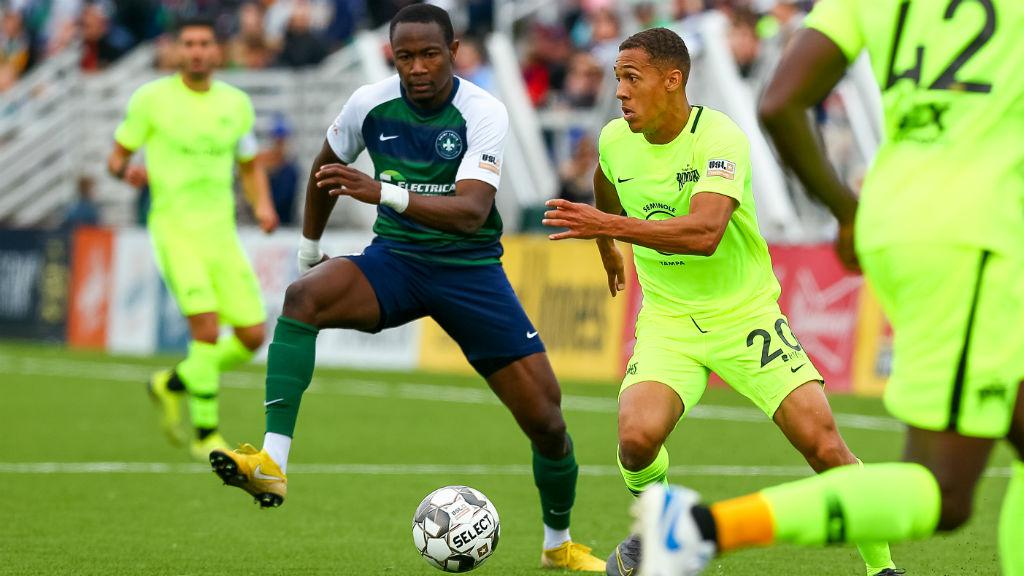 Tampa Bay Rowdies defender Caleb Richards has made a strong start to life in the USL Championship, playing every minute of the 2019 campaign thus far. | Photo courtesy Saint Louis FC

While having each other has been a big help, both players acknowledged the vital role that their teammates, coaching staff and others in the Rowdies’ organization have played in welcoming them and helping them make a smooth transition to their new home.

However, there are still some things about their new American teammates that they haven’t quite caught onto just yet.

“There’s actually a full language barrier,” said Richards. “There’s so many words that we say that they don’t understand, or they say and we just look at each other like what are you talking about?”

“I definitely think there’s an apparel gap,” said Doherty. “I think the clothes and stuff that we would wear in the U.K. and Ireland is a lot different to what they wear over here. In my opinion, I’ve seen some questionable, questionable gear and I don’t know if that gear would survive a week in an English dressing room.”

While there is a bit of a culture gap for Doherty and Richards to bridge, the more important adjustment is happening on the field. After playing in youth team set-ups in England, the pair has spent the past two months training with and playing against grown men.

“It’s definitely been a challenge, but I think I’ve done well,” said Richards, who has played every minute of the season for the Eastern Conference-leading Rowdies so far. “I’ve learned a lot, especially how to read the game better and be more physical in the game.”

Doherty says he wasn’t sure what to expect when he came over but has found training sessions to be “kind of similar” thanks to the presence of Scottish Head Coach Neill Collins.

“He’s played his own great career in England and so has [Assistant Martin Paterson], so that’s kind of helped us,” said Doherty, who made his first start of the season on Wednesday at ATL UTD 2. “They know what it’s like coming up in an English dressing room, so they know how to get at us and what we need to become better players.”

The goal for Doherty and Richards is to emulate the success of young players that have left the U.K. and Ireland in hopes of making a name for themselves elsewhere. And they aren’t alone in that goal.

In fact, they’ll square off against a few players looking to do the same when the Rowdies host the Charlotte Independence on Saturday night at Al Lang Stadium (7:30 p.m. ET | Match Center | ESPN+)

The Independence, led by Irish first-year Head Coach Jim McGuinness, have also acquired their own set of international youngsters. 18-year-old goalkeeper Curtis Anderson, who helped England win the U-17 World Cup in 2017, traded powerhouse Manchester City FC for Charlotte this offseason and has been joined by Celtic FC loanees Mark Hill and Andrew Gutman. 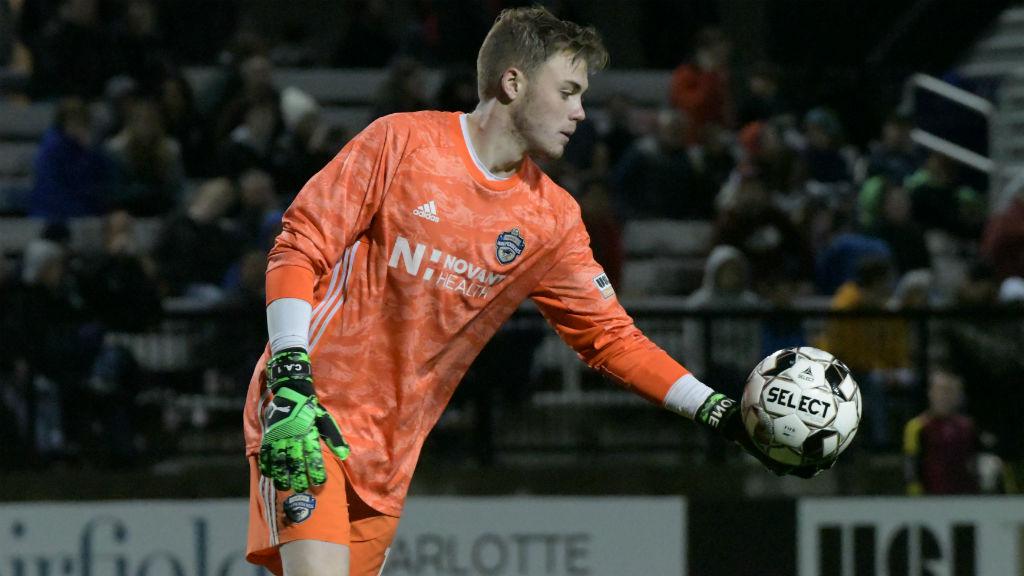 “I could have stayed in England. I could have gone safe and stayed out the end of my contract, collected all my money from City and then took the safe option of reviewing it at the end of the season, start of next season,” Anderson said in an interview with BT Sport. “But, like I said, I have showed the belief to move here – which is obviously the other side of the world – just because I believe that I am good enough to do it and I’ll be able to do well here, which will open up more options for me in the future.”

There are plenty of examples for Anderson and company to follow.

Top English talents like Jadon Sancho, who also left Manchester City to pursue playing time at Borussia Dortmund, or Emile Smith-Rowe, who spent part of this season on loan from Arsenal FC at RB Leipzig, are showing that sometimes it takes a move outside of one’s comfort zone to take the next step in their career.

“More and more people are realizing that England is not just the only place for football because you can make a name for yourself other places,” said Anderson. “It doesn’t have to be there because, if you’re doing well, it doesn’t matter where you are in the world nowadays. Everyone is going to know about it.”

While coming to America on loan is a relatively new phenomenon, Richards believes the early returns have been well worth the investment.

“The English players, they think it’s more of somewhere you go towards near the end of your career, but the level is still very high,” said Richards. “We’re just doing our own journey and learning every day.”