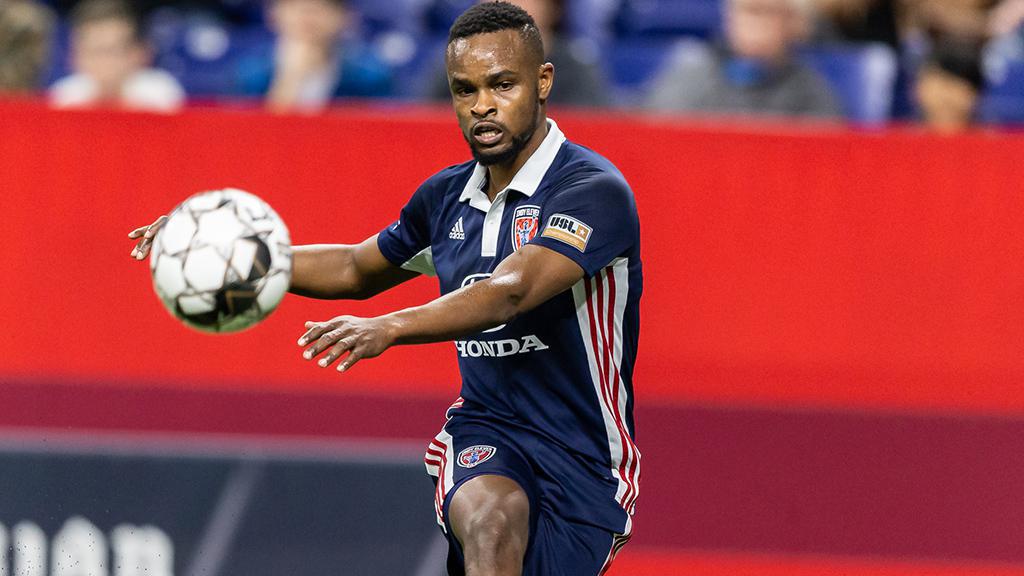 Given the club’s offseason player movement, it wasn’t difficult to place Indy Eleven among the sides that would be a top contender for USL Cup from the Eastern Conference this preseason.

And while their early-season schedule has had Head Coach Martin Rennie’s side playing catch-up in the games played column as it did a season ago, there’s no team that’s sitting in a better position right now after a fourth successive victory and a third game in five outings that saw the side notch three goals.

Bethlehem Steel FC was the latest victim on Saturday afternoon, with Indy’s second goal – Dane Kelly’s third of the season and 70th regular-season goal of his Championship career – providing a signature moment in the win at Talen Energy Stadium.

That level of incisive passing is going to be meat and drink to Kelly, who after a glitchy performance against Hartford Athletic on March 30 has now clearly found his range with three goals in the past two games. And if a future opponent elects to sit deeper and try to take space in behind the back line away, the Eleven certainly look to have the weapons to break those down.

The next six games will offer a glimpse into how good this Eleven side can be, starting with Sunday’s visit to the New York Red Bulls II and ending with June 1’s game against Pittsburgh Riverhounds SC, but by the end of it Indy may have cemented itself as the team to beat in the Eastern Conference.

1. His presence didn’t draw as much attention as Dane Kelly’s over the past week, but it sure is good to see Tyler Pasher back and healthy again. After suffering through a 2018 season marred by injury, the Canadian has started each of the past two contests and showed why he can be an important piece for Indy moving forward, capping off a Man of the Match display on Saturday against Steel FC with his first goal in more than a year.

2. Real Monarchs SLC pulled off arguably the most impressive performance of the weekend after rallying back from an early two-goal deficit to defeat San Antonio FC 3-2 at Zions Bank Stadium.

The win underlined how good the Monarchs are on their home turf, especially coming off a heavy defeat to New Mexico United the previous weekend. After conceding twice in the opening 20 minutes – Brian Gomez’s first of a brace for SAFC coming off an uncharacteristic mistake by Real defender Kalen Ryden – the Monarchs set about to outshoot their hosts 21-4 the rest of the way. Two of Real’s goals may have come from the penalty spot, but the relentless pressure the side applied meant it took a strong display by San Antonio goalkeeper Matt Cardone to keep the game close.

3. One of the players to convert from the spot for the Monarchs was Maikel Chang, who got to celebrate his 150th regular-season appearance by finding the back of the net early in the second half. Chang wasn’t the only player to have a landmark day on Saturday either, with OKC Energy FC goalkeeper Cody Laurendi marking his 100th regular-season appearance in the league with his 30th shutout.

4. Laurendi’s five-save performance helped Energy FC take a much-needed victory against Orange County SC, one that will hopefully right the ship for OKC after it had gone winless in its previous four outings. With the Black Gold Derby coming up on the road against Tulsa Roughnecks FC this Saturday night, there would be no better time for a positive run of form by Head Coach Steve Cooke’s side.

5. The paths of Laurendi and defender Peabo Doue didn’t quite cross in Oklahoma City – Doue departed the offseason prior to Laurendi’s first season with Energy FC in 2016 – but the experienced defender also made his 100th regular-season appearance on Saturday and helped Loudoun United FC to a piece of history in a 3-1 win against the previously undefeated New York Red Bulls II.

6. There was a serious sense of foreboding when New York took the lead after just four minutes given its history at MSU Soccer Park overall and what had happened to Hartford Athletic a few days earlier, but instead of retreating Loudoun produced the perfect response and got two goals before the 25th minute to go ahead. Loudoun Goalkeeper Calle Brown – the club’s first signing earlier this year – then made the lead stand up with a stellar display as United pulled off probably the biggest surprise of the weekend.

7. Nashville SC looked like it had got itself on track with back-to-back victories in the previous two weeks, but in its 3-1 loss to the Charleston Battery on Saturday night it found out the difference between facing opponents like Ottawa Fury FC and Memphis 901 that are hopeful they will be in the playoff picture come the end of the season and a side like the Battery that know they will be.

8. The Battery outbattled NSC consistently throughout the contest, winning 64 of 116 duels overall, and produced quality in the final third when needed. There were some great candidates for the Championship’s Assist of the Week (presented by the St. Louligans) over the past few days but check out this dime by Kotaro Higashi that set up Arthur Bosua’s first professional goal.

Charleston has now picked up three consecutive home victories and is still awaiting the arrival of Ataulla Guerra. Once the Trinidad & Tobago international arrives, it’ll only make the Battery more dangerous.

9. While the Battery were taking a convincing victory, one state above North Carolina FC was in the process of making the Southern Derby look like a two-horse race again this season with its 3-0 victory against the Charlotte Independence. In fairness to the Independence, the final score might have been a bit more lopsided than the overall game, but in the end it felt like a fair result as North Carolina produced telling moments its hosts were unable to in securing a fourth consecutive league victory in the North Carolina Derby.

10. New Mexico United’s undefeated run to start its inaugural season was going to come to an end at some point, but it felt as though the visitors at Greater Nevada Field ran out of steam a little bit as Reno 1868 FC’s strong second-half display was rewarded by Duke Lacroix’s late winner. After going toe-to-toe with Reno over the opening 45 minutes as both teams recorded 11 shots and one goal apiece – both beautifully taken by Reno’s Sergio Rivas and NMU’s Josh Suggs – 1868 FC held the upper hand throughout the second half and picked up a very valuable home victory.

11. It felt going into Saturday night’s game between Pittsburgh Riverhounds SC and Saint Louis FC that it would be a contest where neither side would give away much. Add in a torrential downpour and lightning that delayed kickoff for more than an hour and the conditions only added to the difficulty factor for both attacks as they went up against well-drilled defensive units. It made a scoreless draw the only really likely outcome, and while both sides will be likely pleased to come away with a point hopefully there’ll be a bit more on display – and a bit more on the line – when they meet again on the penultimate Saturday of the regular season.

12. Let’s talk about the final moments of El Paso Locomotive FC’s 0-0 draw with Austin Bold FC, shall we?

This starts out great with Omar Salgado, who races down the left side and gets a somewhat serviceable ball into the penalty area. Then, if you were like me, you were waiting for a payoff, some kind of final effort on goal with the final whistle just seconds away. Instead, El Paso managed to pass its way out of the situation and the game petered out near the halfway line.

13. We can’t know what the communication was like on the field, but there must be some kind of situational awareness here that sees someone from Locomotive FC take hold of the situation to follow up Salgado’s initial move and give the side a chance to win. Instead, we got the encapsulation of a game that ended up with three times fewer shots on goal (3) than offside calls (9).

14. Las Vegas Lights FC knows it’s going to have to solve its issues on the road if it’s going to be a playoff contender this season, so that made the club’s 5-2 loss to Rio Grande Valley FC on Saturday night all the more disappointing as it allowed the Toros to double their goal total for the season in a single outing. Nothing seemed to go right for Head Coach Eric Wynalda’s side, with Gabe Robinson’s own goal in the opening minute of the second half seeming to sum up the night.

15. “The opening minute in the second half was one of the most embarrassing moments we’ve had, it was a combination of lack of discipline, lack of concentration and bad luck,” said Wynalda after the game, and it’s hard to disagree. Las Vegas hits the road again next Monday night against another side that’s run hot and cold this season in the LA Galaxy II. It had better have a response ready.

16. By the way, don’t sleep on what’s going on in Rio Grande Valley right now. Two consecutive victories on home turf have seen the Toros awaken from their early-season slumber ahead of a trip to the west coast this week. We’re going to need to see a bit more from Head Coach Gerson Echeverry’s side to move them into the status of playoff contender, but there seems to be progress being made here, especially now that Maalique Foster is finding form.

17. Phoenix Rising FC knew it had to produce a big rebound display on Saturday night after its disappointing midweek defeat to Austin Bold FC, and with Junior Flemmings leading the way the hosts romped to a 4-0 win against Tacoma Defiance in front of another sellout crowd of 6,534 at Casino Arizona Field. Rising FC racked up the most shots in a single game in Week 7 with 23 against Tacoma, and that proved too much for Defiance, which after it conceded the opener in the 34th minute just capitulated once again to go in three goals down at the halftime break.

18. The team everyone is chasing in the West now, though, is the Portland Timbers 2, who edged ahead of New Mexico United thanks to a resilient display against Colorado Springs Switchbacks FC that saw Foster Langsdorf score twice to respond to the Switchbacks twice taking the lead at Merlo Field. Colorado Springs my have thought it was on its way to victory when Jordan Schweitzer’s long-range piledriver found the net with six minutes to go, and for another side it could have proved a fatally demoralizing blow. T2, however, has shown some serious ability to take a tough moment in stride and rebound quickly, and on this occasion Langdorf’s well-placed header just two minutes later ensured it would sit on top of the tree ahead of Friday night’s visit to second-place New Mexico.