ST. PETERSBURG, Fla. – It’s inarguable that the past three weekends haven’t produced the sort of results Louisville City FC has become accustomed to.

But there is one thing that the club’s fans can hold true to.

The faces may have changed, but the culture within the locker room is exactly as it was when LouCity was lifting back-to-back USL Cups.

“It’s been like that here since I walked through the doors,” said LouCity midfielder Niall McCabe on Saturday night. “We set a culture that was established here with [Former Head Coach] James [O’Connor] and they were very high standards. Everyone that came in Year 2, Year 3, [Year] 4, the guys that have been here let them know that this is the way it is here, this is what’s acceptable, this is what not’s acceptable.”

Everyone knew the past two outings, home defeats to Birmingham Legion FC and Pittsburgh Riverhounds SC, were not acceptable. There was even the chance that a third successive defeat was to follow as the side trailed the Tampa Bay Rowdies on Saturday night at halftime at Al Lang Stadium.

And then Louisville showed why it has lifted the silverware after the final game of the season each of the past two seasons. A side that included only three players that started against Phoenix Rising FC last November put on a show of collective will, and moments of brilliant skill, that in the end left the visitors disappointed to walk away with only a 1-1 draw to show.

“A little disappointed, I would say,” said McCabe. “Especially in the second half I felt we had really good chances to score a couple of goals and we hit the post and couldn’t break them down and it was a bit unfortunate, but I’m really proud of the fight that was shown that might have been missing the last couple of games, so it’s pleasing to see the battle against a really good team. We can be pleased with a point and slightly disappointed not to come away with more.” 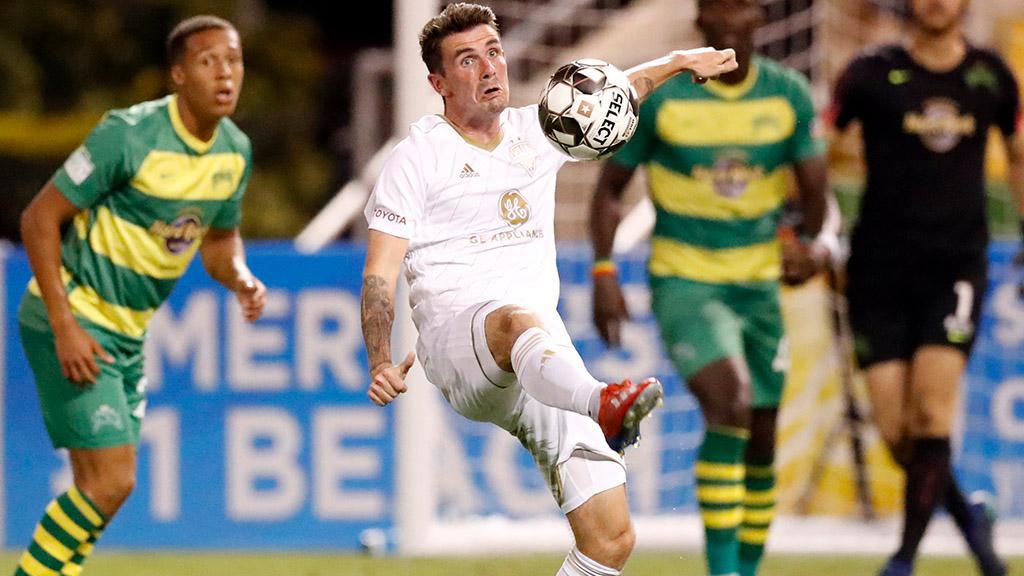 The all-time leader in appearances in Louisville City FC's history, Niall McCabe helped drive the visitors back from a halftime deficit against the Tampa Bay Rowdies on Saturday. | Photo courtesy Matt May / Tampa Bay Rowdies

To earn even a point meant doing something that no prior visitor to Al Lang Stadium had managed this season; find the net against the Rowdies’ formidable defense. With Yann Ekra and Dominic Oduro forming a shield in front of the back three that included former Louisville standout Tarek Morad, the visitors had difficulty breaking down Tampa Bay in open play during the first half.

And even when they did – Head Coach John Hackworth’s adjustment to overload to the left half of the field and find passing lanes in behind the back line serving to tilt the field in LouCity’s favor after the break – there stood goalkeeper John McCarthy in the Rowdies goal, making show-stopping saves to make it feel like LouCity’s efforts would be in vain.

“On his last save before the goal, I was like, ‘he’s so good tonight this might not happen,’” said Hackworth. “You’ve just got to tip your hat to him because he’s playing at such a high level right now and it’s tough to get anything past him.”

But in the 88th minute, on the eighth shot on goal of the night for the visitors, the breakthrough arrived. Magnus Rasmussen, key throughout the second half, half-wove and half-bulldozed his way into the Rowdies penalty area. The ball broke off a Rowdies defender as cover converged and sat perfectly for Abdou Thiam, who as all good strikers do sat in anticipation that something would break his way.

“I have to follow every ball because every chance is going to matter,” said Thiam. “If you look at the second half, we have more chances, so I know my time is going to come. I stay positive first, I know I can get something from that goal.”

One of the new faces that has been called on to fill the shoes of those departed or currently sidelined to injury, Thiam understands the responsibility stepping into a locker room like Louisville’s brings.

“The expectations people have for Louisville is still high, so we have to keep that level higher than we are now and we know where we are now isn’t where we’re supposed to be,” he said. “We have that in mind, and we can work on that in practice and take it day by day.”

As the culture of the club gets passed on from those who have been there since the start like McCabe to those newly embracing the challenge like Thiam, the new guys showed on Saturday that the standard in Louisville hasn’t slipped.

“Tonight, you saw the guys that stepped in, that’s the way it should be,” said McCabe. “Every week, everybody can play, and we’ve shown that in the years I’ve been here, we’ve always had tremendous strength in depth. Tonight showed that – maybe that hasn’t shown in previous games, but tonight definitely showed that.”