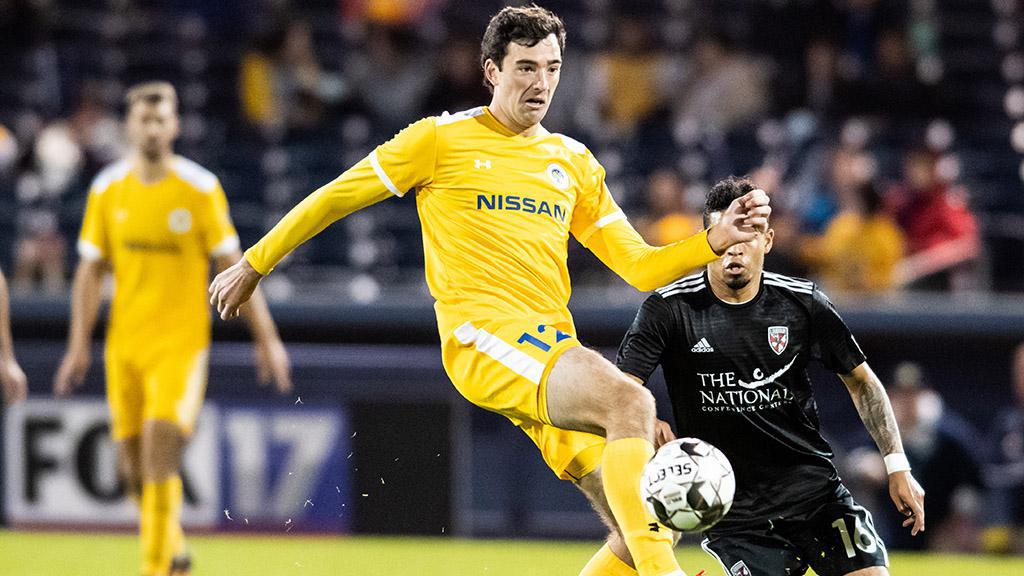 Tucker Hume hasn't been an automatic starter in his time with Nashville SC, but the numbers indicate he makes a positive impact when he's in the starting lineup. | Photo courtesy John Wilkinson III / Nashville SC

Nashville SC’s attacking offseason arrivals caught big headlines, and with four goals in the club’s opening four games Daniel Rios has made a great start at the club he will help lead into Major League Soccer next season.

But a look at the club’s overall numbers since the start of the 2018 season also suggests that one of NSC’s holdovers from its inaugural campaign could have a major role to play if Nashville is to live up to the preseason predictions some – including my colleague John Arlia – made of a USL Cup-winning campaign.

And that player is Tucker Hume.

The 6-foot-5 center forward made his first start of the 2019 season on Saturday afternoon against Ottawa Fury FC and contributed to the best display Nashville has put in this season. Going up against the club he competed for in the 2017 USL Championship season, Hume’s numbers didn’t exactly jump off the page: he scored once, had one key pass and went an even 7 of 14 combined across duels and aerial duels.

But what Hume brings doesn’t always seem to show up on the stat sheet, even though his figures of eight goals in 24 appearances at a rate of a goal every 164.75 minutes since the start of 2018 are perfectly respectable. What Hume brings, in part because of his size and smart movement, is an ability to create space for others. This is borne out by Nashville’s overall numbers when he’s in the starting lineup, and when he’s not.

Hume’s size and how he uses it is, of course, his biggest asset. His ability to win crosses and prove a threat off set pieces makes him hard to handle for opposing center backs. But maybe the most interesting aspect of Nashville’s split numbers – and Hume’s himself – is that if you’re looking for him to spark a game off the bench, it’s a role he’s hasn’t had great success in fulfilling.

In the nine appearances of his 24 for the side that Hume has made as a substitute, he hasn’t found the net or created a single chance, compared to the eight goals and 21 key passes he’s logged as a starter. Those numbers more than anything make the argument that Hume is far more effective when allowed to find the rhythm of the game from the opening whistle, rather than adapt to the drumbeat that’s already been established by those on the field.

So, the question is: Where does Hume fit in a line-up that has marquee attackers like Rios and Lancaster? Can you afford to bring one off the bench? Perhaps not. You could probably make just as clear an argument that while Rios has gotten off to a great start, Lancaster is going to need minutes to find his best form.

But as they say, the numbers don’t lie. And in this case, they’re in Hume’s favor.