As Fury FC’s longest-serving player, Carl Haworth has become emblematic of the club in Canada's capital 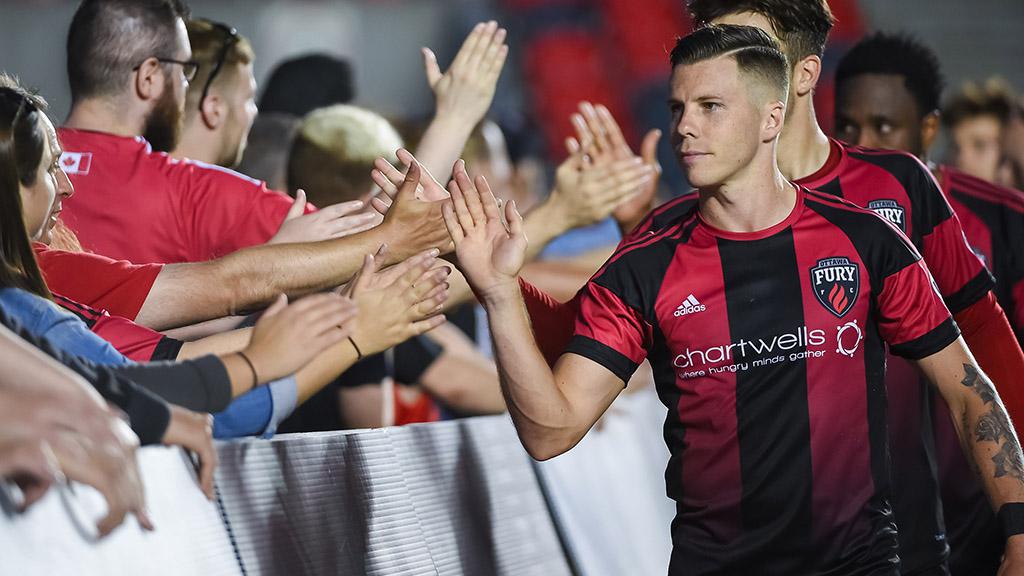 OTTAWA – Having called Canada’s capital home for the past seven years, there’s an understandable amount of civic pride for Ottawa Fury FC’s Carl Haworth when he describes the city.

“It’s a great mix,” said Haworth this week. “You have your downtown, your financial district, your busy areas, hustle, bustle, then you’ve got canals running through the city, rivers. We’ve got a provincial park 20 minutes outside the city, you can get outside – you drive 20 minutes and you’re in the wilderness and you don’t hear any of that city life and the chaos that comes with it. It’s a really good mix from that standpoint, kind-of a big city with a small-town feel if you will.”

At least part of the reason Ottawa has felt like home since he arrived to join what was then Fury FC’s USL League Two club in 2013 is the similarity it bears to the upbringing he experienced in his hometown of Barrie, Ontario. The days spent at Lake Simcoe and on the trails in the nearby countryside were part of everyday life in a city that currently boasts a city population of less than 150,000 people.

The big city then was Toronto, which sits 62 miles south of Barrie and served as a major venue for Haworth’s youth soccer career. Regular trips to Toronto itself – or to the suburbs of Mississauga, North York and Etobicoke – gave Haworth and his teammates the level of competition they needed to pursue their dreams of reaching the next level.

The same could be said for Haworth’s sister, Rachel, whose ability at gymnastics also saw the family seek the competition Toronto offered. With dad Chris and mom Janet serving as both coaches and chauffeurs, the family’s bonds grew strong in the arenas and on the road to and from the Big Smoke.

“[My dad] was integral in my development and my progression not only as a human being, as a child but also as a soccer player,” said Haworth. “It had a massive impact on who I am today both as a person and a player, and then my mom more so with my sister. My sister and I were both athletes at a pretty competitive level – she did gymnastics and represented Team Ontario – so our parents’ time was split between the soccer field and the gymnastics arena.

“All credit to them, it was a very busy lifestyle. Gymnastics wasn’t huge in the Barrie area so every weekend it was driving down to Toronto or the [Greater Toronto Area] and the surrounding area for one or both of us. We couldn’t have been where we are without them. Huge credit to them, I owe them everything.”

Now Haworth is aiming to give back to the club that has been the venue for his entire professional career. The first Canadian signing in club history as it stepped up to the pro ranks from League Two before the 2014 season, Haworth has made more than 100 appearances for Ottawa, establishing himself as not only the face of the club but also building strong relationships across the city with fans and colleagues alike. 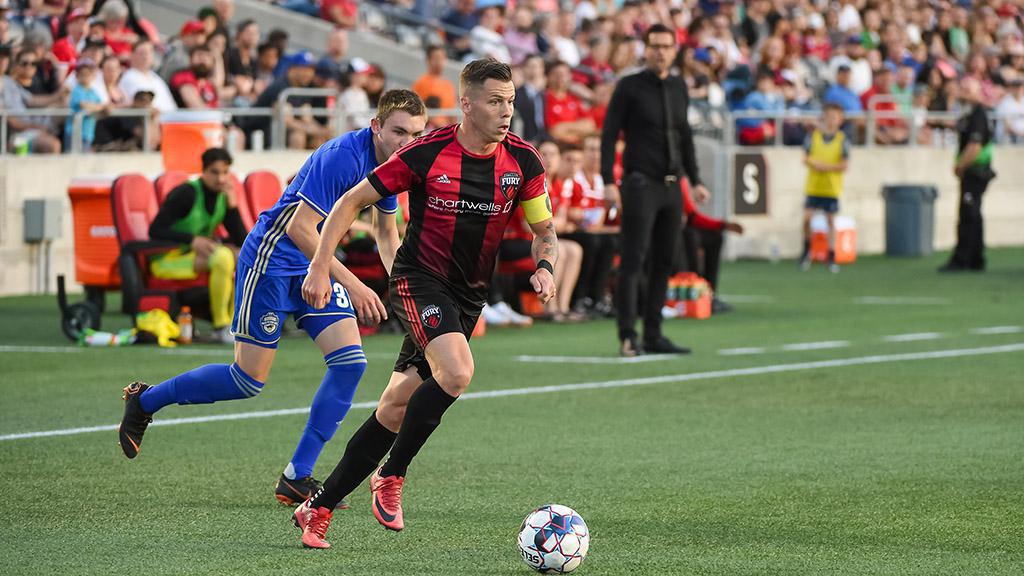 Having surpassed 150 appearances for Fury FC in his career, Haworth is excited about the start the side has made to the new season with four points from two road games. | Photo courtesy Steve Kingsman / Freestyle Photography / Ottawa Fury FC

Given the transient nature of professional soccer for players across North America, the 29-year-old is certainly appreciative of what he has with Fury FC.

“I think in North American football it’s very rare,” said Haworth. “There’s not necessarily many cases where – call it loyalty, call it what you will, guys move around from year to year and it’s difficult for a city and a fanbase to identify with their players. To be in a situation where I’ve been here many, many years and built some great relationships, I take great pride in that, and being able to help this club succeed and bring some more silverware to the club, that’s the end-goal. It would be great to do that in a city that I’ve been at for so long and with a club and organization that I’ve been involved with for so long.”

His career with Fury FC will likely see Haworth one day receive the sort of reception at TD Place that former teammate Eddie Edward will receive this Saturday when the Ottawa native is honored after his offseason retirement. Before that day arrives, though, Haworth is aiming to help inspire the next generation of young players in the city to follow him into the professional ranks through Fury FC’s academy.

And as someone whose primary option more than a decade ago was to compete collegiately in pursuit of a professional career, the signing of former Fury FC Academy standout Jadon Vilfort to a professional contract this offseason was a big step forward for the club as it looks to provide a pathway for local standouts to reach the next level. 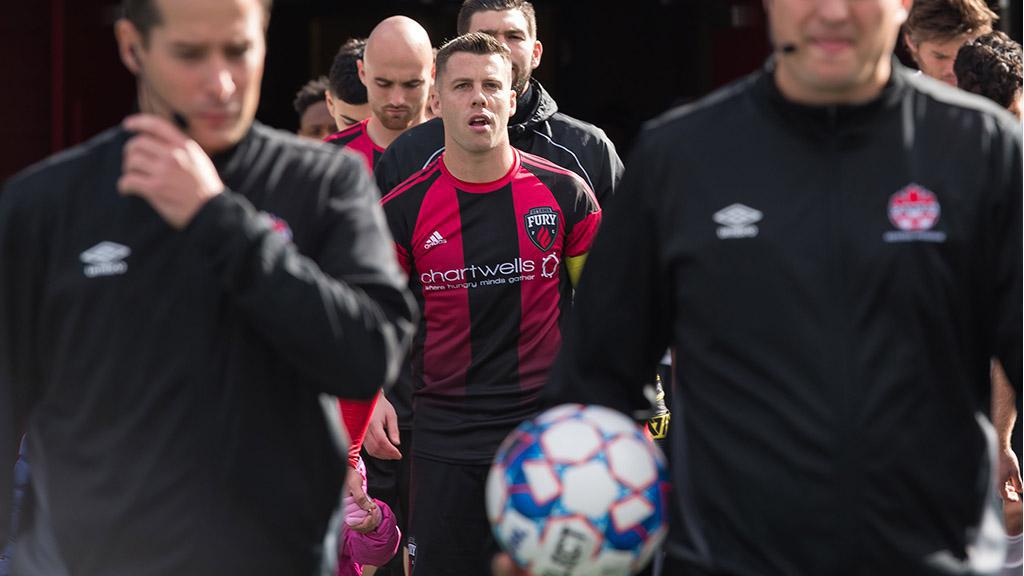 While Vilfort is the future of the club, the present also seems bright. After two seasons that saw Fury FC miss out on the USL Cup Playoffs, a start of four points from two road games ahead of Saturday’s home opener against Nashville SC has brought a sense of optimism to second-year Head Coach Nikola Popovic’s side, with Haworth giving credit to the organization for its offseason planning as a reason he and his teammates have hit the ground running.

“Our preseason was restructured,” said Haworth. “We got down south [to IMG Academy in Florida] in the warmer weather and on outdoor pitches a lot earlier than we have for an extended period of time, and we were able to go straight from there to our first game in Charleston, which made a world of difference for us. A lot less travel, getting the spacing right on outdoor pitches and being out in the air. It’s clearly helped, the guys have done fantastic these first couple of games.”

Haworth also points toward the continuity that Popovic’s presence has meant, with offseason roster moves tailored to fitting the system the Serbian has looked to implement since his arrival. Nashville’s visit on Saturday will be the biggest test the side has seen in the young season, but in the bigger picture there’s no doubt for Haworth that this season is a crucial one for the side.

“If we didn’t make the playoffs this year it would be a catastrophic failure,” he said. “The playoffs are absolutely the No. 1 goal, and we want to host playoff games, so we’re looking at a top-four spot and then we’re hosting some playoff games. Top-four in the conference I think is a very achievable goal, very realistic, and that’s the first step. Once we do that, we can reassess, see where we’re at. I wouldn’t be surprised if we’re playing games in November this year.”