What Happens When Your Kickoff Gets Moved by 14 Hours? 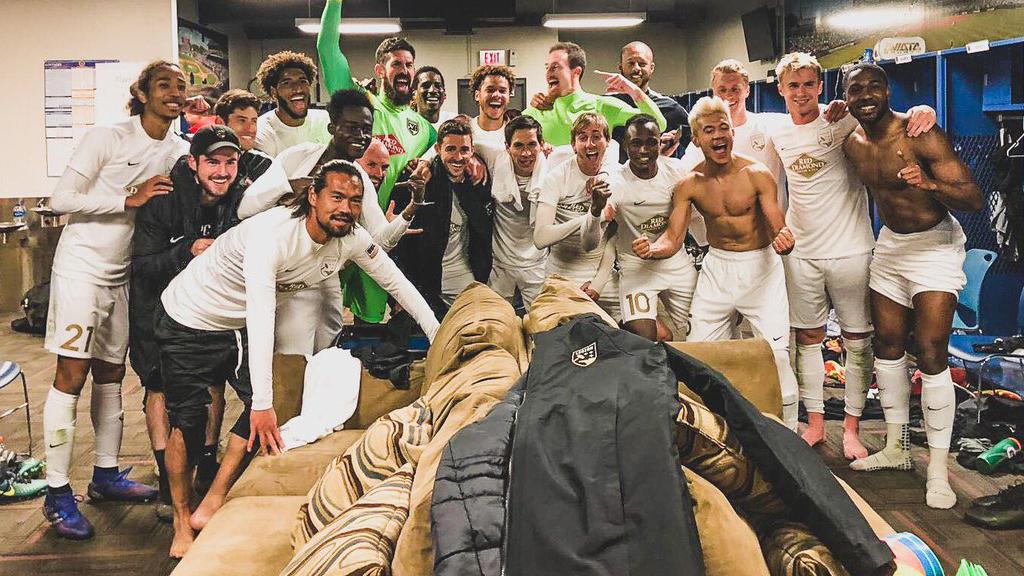 The moment that Birmingham Legion FC Team Operations Coordinator Caylor Feltman was notified around 8:15 p.m. ET on Saturday night that his club’s game against Louisville City FC had been postponed, the laundry list of what needed to happen next quickly ran through his head.

“The first thing was obviously, make sure the team knew so we could start getting ready to go, because they didn’t want to be there any longer than we had to be if we weren’t going to play soccer that night,” said Feltman by phone this week. “From there, I thought about it chronologically. What are we going to eat tonight, what are we going to eat in the morning, is the locker room going to be ready for game time and how we are going to get home? Those are going to be my biggest priorities for the next 12 hours.”

It was certainly not the circumstance Legion FC had envisioned for their first road game as a club and an unexpected early challenge for those like Feltman, Equipment Manager Patrick Corkery and Communications Coordinator Clayton Humphries, who are all new in their roles with the expansion Championship club.

When it came to a place for the squad to eat, complicating the situation was the presence of the NCAA Men’s Basketball Tournament’s Southern Regional up the street at the KFC Yum Center, which had brought fans from Virginia, Oregon, Purdue and Tennessee to the city. That meant downtown was buzzing with fans and finding a dinner reservation on short notice for 25 wasn’t necessarily going to be easy to pull off.

There, Legion FC caught a break. Feltman’s first call was to The Old Spaghetti Factory that had welcomed the travelling group the night before, and while they weren’t able to cater to the team again, they had an idea who could. Feltman’s next call to Buckhead’s Mountain Grill just across the Ohio River that separates Kentucky and Indiana proved successful.

“They had space available and we went ahead and booked it,” said Feltman. “I don’t know if it was the ideal place for something healthy for the guys the night before a game, but they had enough options and they made it work.”

“We can say now we’ve been to Indiana, because we went across the bridge,” added Humphries with a laugh. 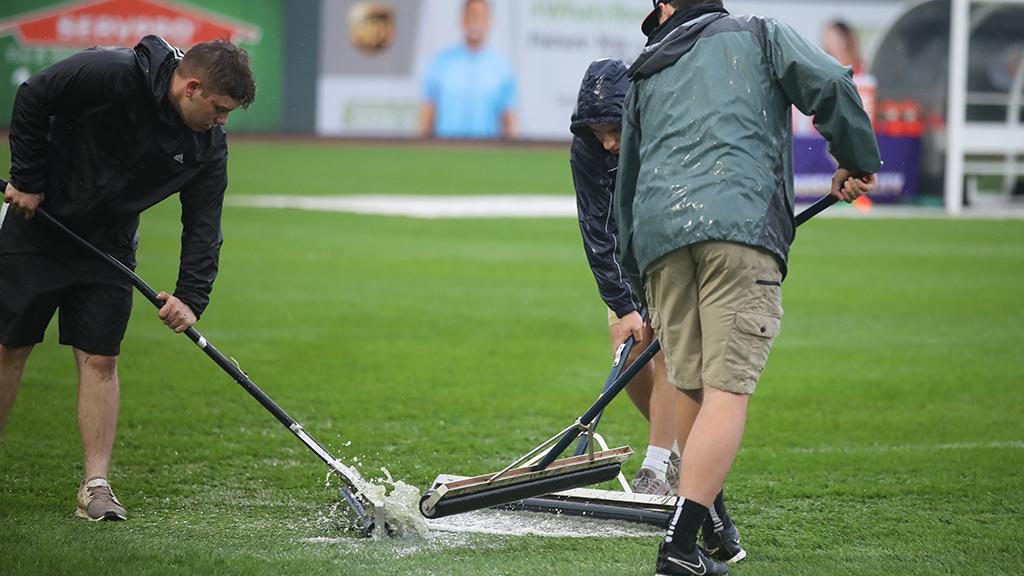 While Slugger Field's grounds crew made their best attempts, the heavy rains that arrived in Louisville forced the game's postponement on Saturday night to the following morning. | Photo courtesy Em-Dash Photography /

While Feltman was trying to take care of getting the players set up for the change of plans, Head Coach Tom Soehn’s focus was on making sure his squad would be able to carry forward the right mentality as they refocused their energy for a Sunday-morning kickoff. While a 10 a.m. kickoff might have been familiar for Legion FC’s players during their academy days, it was the first time Soehn had experienced such a circumstance in the professional ranks.

Given the stop-start nature of Saturday night’s preparations – where the sides had warmed up twice before the game was officially postponed due to the heavy rain in the area – there was plenty for Soehn and his assistants to do to make sure the players would be ready the next day.

“You get them all revved up for starting, then you cool them down and let them relax so anxiety doesn’t get to them,” Soehn said of the delays. “Then you get to the locker room and you kind of lighten the mood a little bit and as you get back out there again you fired them up again. I honestly probably did it four or five times on the day. Then the disappointment of not playing, you have to manage that. When you get back to the hotel you talk about how you carry what we had ready for that game for the next day.”

The stop-start nature of Saturday’s preparations hadn’t just affected Soehn. For Corkery, there was the issue of dealing with a sizeable amount of apparel that would in some cases need to be soaked, washed and dried before the players arrived back in the locker room the following morning. The side taking to the field in its all-white road uniforms for a 15-minute warm-up before the game was finally postponed was the biggest issue and made Corkery’s night the longest of anyone’s.

Fortunately for Corkery and the rest of Birmingham’s traveling party, in Louisville’s Director of Operations Andrew DiLallo and Equipment Manager Ben Hulsmen they had two important allies in getting things turned around.

“Andrew was very hospitable, and they made a bad situation as good as they could,” said Corkery. “It would’ve been much more difficult to do everything we needed to do without their help. I’m sure they could’ve said ‘you need to get all of your gear out of the locker room’ and I would have had to put it back in the morning, but they didn’t.”

“I heard from [USL Director of League Operations] Justen Braddock at one point before our trip that Andrew DiLallo was one of the best in our positions,” added Feltman. “[We] got really lucky that something like this happened on a trip to Louisville where their equipment manager and their team admin were fully prepared, and they were ready to go for something like this.”

As Feltman and Corkery loaded up the gear to take back to the hotel, Humphries was making sure that his colleagues would get fed as well as the players and coaches. As Corkery started soaking the uniforms in OxiClean to get out any mud and grass that had been picked up during warm-ups and loading the warm-up gear into the hotel’s laundry facilities, dinner arrived.

While the machines worked, Corkery and Feltman got a brief chance to relax after a hectic couple of hours.

“There was a weird kind of calm [as we ate dinner] that we felt prepared and that we were going to be able to get it done,” said Corkery. 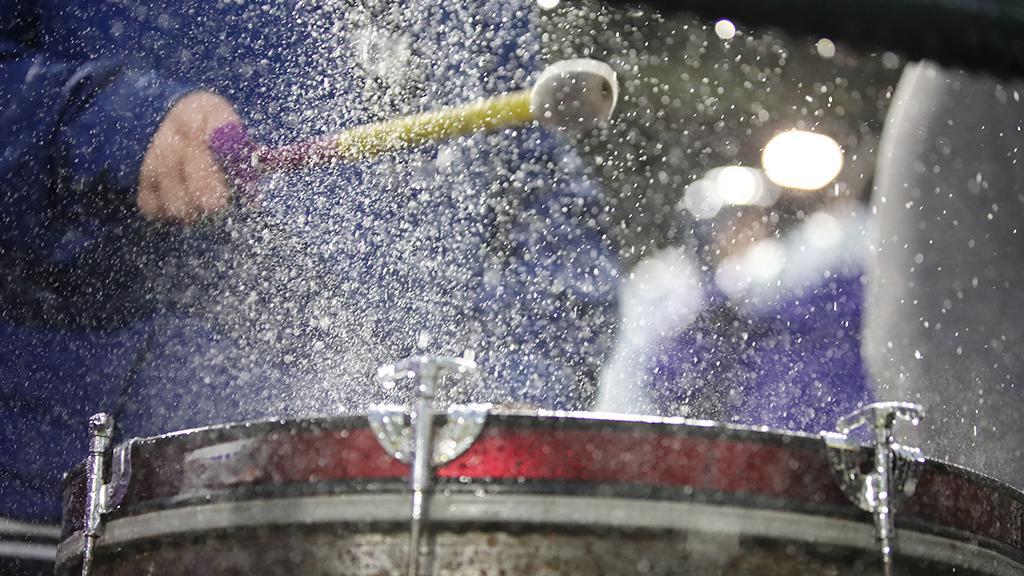 After dinner was done, Feltman kept watch on the laundry as loads got switched around and updated the team on the schedule for the next day through text, while Corkery grabbed a shower before resuming his watch. That allowed Feltman to head to bed early, in exchange for driving duties the next afternoon.

By the time Corkery’s last load dried at 2:30 a.m., kickoff was just over seven hours away, which meant there wasn’t much time for sleep. Three-and-a-half hours later, Corkery, Feltman, Humphries and Soehn were back up and making sure things were set for breakfast an hour later and in the locker room for the team’s arrival shortly after 8 a.m.

While Feltman oversaw breakfast – brought to the hotel ballroom from a nearby restaurant– Corkery enlisted Humphries’ help to get the locker room as close to it had looked the previous evening.

With the back-room staff having done everything it could to make gameday as normal for Soehn and his players, it then became their time to perform. As odd as the circumstances had been over the previous 14 hours, though, you would have been hard-pressed to notice a difference in Birmingham’s players as they walked out into the crisp morning conditions.

The excitement and poise showed on the field, where Brian Wright’s 87th-minute winner sparked celebrations among players and staff alike as it lifted Legion FC to a first victory in club history.

“It made it all worth it, you know?” said Corkery. “Seeing a guy like Prosper [Kasim] – who’s a guy I’ve got to know a bit because we were roommates in Tampa Bay in preseason – score the team’s first goal and seeing Chandler [Hoffman], the hometown kid, score a goal for the team and then a last-gasp … go-ahead goal, it was exhilarating. It was exhausting and nerve-wracking, but it was great.”

And while the circumstances of the weekend meant the team was unable to make its scheduled flight 90 minutes after the final whistle, a bus ride home to Birmingham went by a lot faster than it might have with three points on board. After sending out a postgame recap and quotes while in transit, Humphries even got to see his Auburn Tigers book a place in the NCAA Final Four on his phone, while players and staff found other ways to pass the time.

“A lot of the team played cards, played board games on the iPad,” said Humphries. “We made it home just fine, we actually got home exactly the same time were scheduled to without the game being rescheduled, so it worked out pretty well.”

Meanwhile in the equipment van, for Corkery there was a welcome two-and-an-hour nap while Feltman navigated the trip home. On top of that, there was the feeling that after coming through a ‘trial by fire’ the young back-room staff is going to be ready for anything the rest of the season can bring.

“I’ve been saying the toughest part of this job is going to be behind us soon once we get some experience and know exactly what needs to get done,” said Corkery. “Now I feel like, especially now the team’s won, that we’re in it now and we’re ready to go. Even at the training facility [on Monday] there was a different energy not only from the players and coaches but with the staff as well.

“Everyone’s ready to go now, we’re really in it.”