Standing-room-only crowd welcomed soccer back to Texas’ capital, were rewarded with victory

AUSTIN, Texas – It was a night that soccer fans in Austin had been waiting on for the past three years.

And simply by the size of the standing-room-only crowd of 5,803 fans that packed into Bold Stadium within the Circuit of The Americas complex, it was clearly a night no-one wanted to miss.

The sounds of the drumline rippled through the air as the flags flew pregame to welcome professional soccer back to Texas’ capital. And then, facing their closest rival for the first time, Head Coach Marcelo Serrano’s side delivered exactly what those fans had been waiting for on the field in a 1-0 victory against San Antonio FC that earned the first victory in club history.

It was a night that proved to be everything that Bold FC owner Bobby Epstein hoped it would be.

“This is just to have fun,” said Epstein moments after the final whistle. “It’s about soccer and coming together as a community and having a great time, and that’s what happened tonight.”

The stadium that the club had broken ground on just this past October proved one of the stars of the show, providing a perfect backdrop for a contest between the two rivals. San Antonio FC’s fans, decked out in red, arrived in numbers as well to give the Copa Tejas clash an added sense of expectancy for both sides.

And when the time came for a hero to rise, the Gladiator came through.

Having arrived in Austin at the behest of fellow Brazilian Serrano, Kleber had already written his name into Bold FC’s record book as the first goalscorer in club history thanks to his tally against Reno 1868 FC two weeks ago. On Saturday, his close-range finish from Sean McFarland’s knock-down header with 13 minutes to go stood up as the game-winner and sent the home fans away happy to have seen history.

“It’s so awesome,” said Epstein. “He came through for us on the road with the first goal ever for the Bold, and he came through here. We’ve got some great players.” 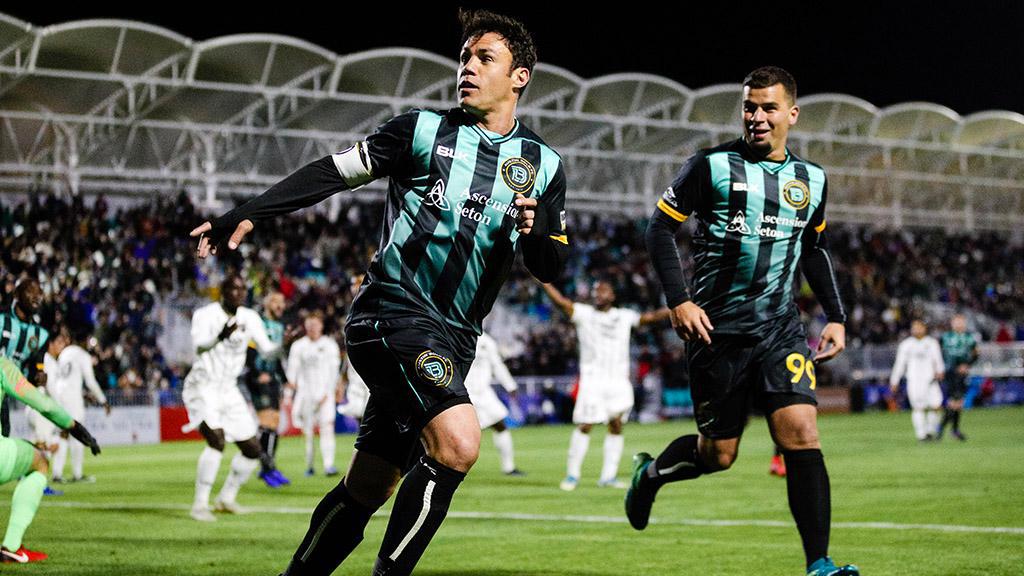 Austin Bold FC's Kleber proved the man of the moment on Saturday night, scoring the game-winner in the debut of Bold Stadium before a sellout crowd of 5,803 fans. | Photo courtesy Will Leverett / Austin Bold FC

It was a win that didn’t come easy, understandably given the stakes. Not only was Saturday the first meeting between Bold FC and SAFC, but both were looking for their first wins of 2019 after slow starts to the campaign. Add in a whipping wind that made life difficult for both sides throughout and it added up to a contest that saw its fair share of physicality.

“It’s a derby, you can see that they made our victory very hard,” said Serrano. “They came for a derby game, they didn’t give us any options. I think they had an advantage playing with the wind the first half, that was our strategy, to try and get the wind, but they had it, so that’s why the game gave them a little bit more hope.”

The road for Austin gets tougher from here. Its next two outings feature a trip to Sacramento Republic FC arrives next Saturday before the club welcomes defending Western Conference champion Phoenix Rising FC and the national television cameras to its new home on April 17 for a clash on ESPN3.

But for one night at least, Bold Stadium and its new team lived up to every expectation that could have been placed before it.