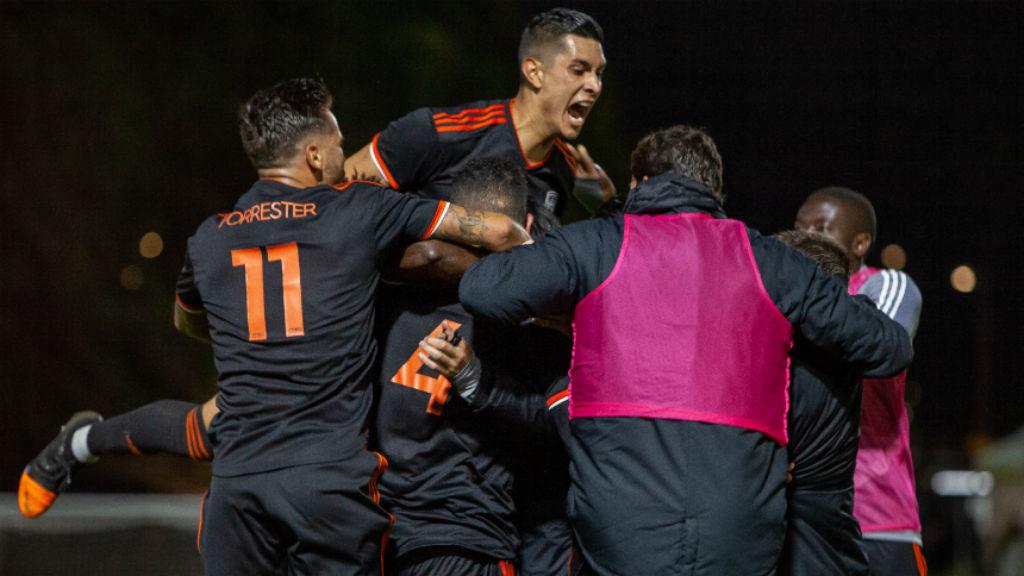 Over the course of an eight-month-long season, it seems sort of silly to think that every minute matters.

But as we all know, a single moment can change the course of a team’s destiny. A late goal or a point in March could be the difference between making the USL Cup Playoffs or watching from home come October.

Those fine margins are why we love this game so much, and they were on display in a big way on Saturday across the USL Championship as four teams rescued a point with goals in the 90th minute or later.

The drama started in the Eastern Conference, with Pittsburgh Riverhounds SC battling back to earn a 2-2 draw with the Swope Park Rangers at Children’s Mercy Park. Tobi Adewole had put the visitors ahead in the 71st minute, but quick-fire strikes from Rodney Wallace and Kelyn Rowe saw the Hounds staring at the possibility of opening the season with back-to-back defeats.

With its back against the proverbial wall, Head Coach Bob Lilley’s squad showed the resolve that saw it lose just five times in 2018. Forward Christian Volesky broke through the Rangers’ defense and won a penalty kick after being taken down by a desperate sliding challenge from Mo Abualnadi. Anthony Velarde kept his cool from the spot in the opening seconds of stoppage time, sending goalkeeper Adrian Zendejas the wrong way as Pittsburgh got off the mark in 2019.

Elsewhere in the East, the Charlotte Independence and ATL UTD 2 traded stoppage-time strikes as the sides battled to a thrilling 3-3 tie at Sportsplex at Matthews. After trailing 2-0, the Independence rallied to take the lead in the 93rd minute as Jorge Herrera marked his 200th career appearance in the Championship with a header that looked set to give Head Coach Jim McGuinness the first win in his Charlotte tenure.

Romario Williams and the visitors weren’t going to be denied, however, as the 24-year-old Jamaican forward powered home a rebound nearly 90 seconds later to complete his hat trick and give Atlanta a deserved road point.

The late drama continued late into the evening in the Western Conference, as Rio Grande Valley FC picked up its first point of the season with an impressive fightback in its Copa Tejas debut against El Paso Locomotive FC.

The expansion side was in prime position to pick up its first victory in club history after Derek Gebhard gave Locomotive FC a two-goal cushion with just 12 minutes remaining, but Romilio Hernández’s stunning strike a minute later gave RGVFC life. As the clock ticked into the 90th minute, Jesús Enríquez headed home Isidro Martinez’s free-kick delivery to spoil the party for a sellout crowd of 7,458 fans at Southwest University Park.

A similar two-goal comeback capped the evening as Orange County SC snatched a share of the spoils against New Mexico United at Championship Soccer Stadium at OC Great Park. First-half goals from Santi Moar and Kevaughn Frater had the visitors on pace for a second straight victory, but the expansion side once again showed its propensity to let a lead slip. Darwin Jones cut the deficit in half 14 minutes after the break and Leonardo’s header 75 seconds into five minutes of added time earned OCSC its second stoppage-time point of the year.

I’m not sure whether this early-season run on late comebacks has more to do with fitness levels or fighting spirit, but I can say that it has been a lot of fun to watch.

And it’s a reminder to all of us to stay tuned in until the final whistle.