Republic FC’s Iwasa looking for a new level, and more from the past week around the league 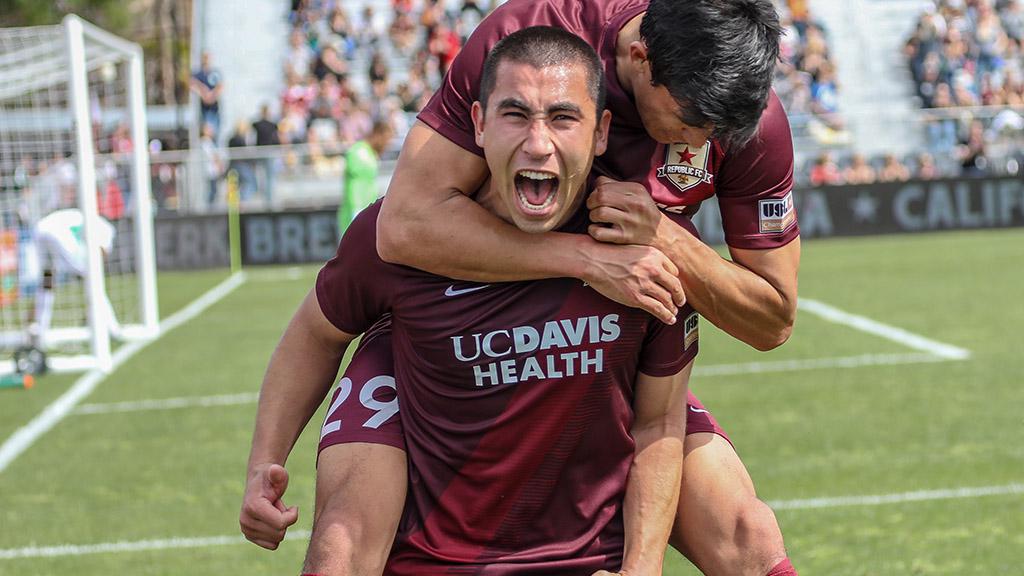 SACRAMENTO, Calif. – Going in, Sunday’s game between Sacramento Republic FC and OKC Energy FC was going to be a litmus test for two teams who had made good starts to the 2019 campaign.

Instead it became a showcase for a player in Cameron Iwasa who looks as though he could scale even greater heights this year after previously earning All-League honors twice in Republic FC’s colors.

Notching a hat trick in 11 first-half minutes – including two tremendous finishes to open and close the sequence – put Sacramento on course for a 4-1 victory at Papa Murphy’s Park that moved the side level on points with fellow frontrunners Tulsa Roughnecks FC and the Portland Timbers 2 in the Western Conference.

The display may also have recalibrated what we should expect of Republic FC’s all-time leading scorer moving forward.

“I think he wants to find out [his full potential] and that’s why he’s done well today,” said Sacramento Head Coach Simon Elliott after the game. “Cameron should be pleased, but I think he knows, and we know, that there’s more in us. His challenge is let’s see where his limit is and let’s go for it.”

With 34 goals for Sacramento in league action over his career, the 25-year-old Iwasa may have found another gear. If he has, Republic FC’s target of a second USL Cup will be firmly within view at the end of this season.

1. After back-to-back wins to start the season, Sunday was a big letdown for OKC Energy FC, which never really seemed at the races as Sacramento romped to victory. What’s going to be crucial is that the side avoids going into the sort of prolonged early downturn that has marked its past two seasons, starting with a bounce-back performance against another tough opponent next Saturday on the road against Reno 1868 FC.

2. For whatever it’s worth, Iwasa’s hat trick wasn’t quite the quickest in USL Championship history. That mark still belongs to the LA Galaxy II’s Ethan Zubak, who struck three times between the 10th and 18th minutes against Las Vegas Lights FC last season in what ended up as a 7-2 victory for Los Dos on May 26.

3. In addition to Iwasa’s showcase, the weekend was marked by two other big attacking performances from a pair of players with stellar reputations. Romario Williams’ hat trick for ATL UTD 2 – which included a stoppage-time tally that pulled a point out of the fire for the visitors in Charlotte – and Maikel Chang’s two-goal, one-assist display for Real Monarchs SLC were great examples of what both players are capable of at their best.

4. Chang’s performance was one of the most important of the weekend, too, as it helped the Monarchs get their first win of the season in emphatic fashion with a 5-0 victory against an LA Galaxy II side that, given its lineup, was very disappointing. With the number of key players departing Zions Bank Stadium this offseason, there was a question mark hanging over Head Coach Martin Vasquez’s side after it needed two big goalkeeping displays from David Ochoa to earn draws in each of its first two games. Some of those questions have been answered for now.

5. It would only have been fitting for Colombian legend Jorge Herrera to mark his 200th regular-season appearance in the Championship on Saturday with a game-winning goal, but thanks to Romario Williams’ quick reply in stoppage time it only earned the Charlotte Independence a 3-3 draw against ATL UTD 2. The 38-year-old is now only one goal behind Dane Kelly for the all-time regular-season goalscoring lead, though, in a duel that’s certain to run the length of this season and maybe beyond.

6. If there’s one thing we’ve learned about Independence Head Coach Jim McGuinness’ side in its first two games, it’s certainly one that is never going to be out of a contest. Now, the Independence have got to stop digging themselves into deficits, starting next weekend in Saint Louis.

7. There’s been plenty to like about New Mexico United’s undefeated start to its season, but its inability to close out games in second halves is becoming a trend the side needs to put an end to. In the past week, NMU had to hold on for its first win against Tulsa Roughnecks FC on Wednesday night and then surrendered a late equalizer against Orange County SC on Saturday. Sitting without a loss is nothing to sniff at, but there is a feeling the return of six points from four games should be more.

8. If – as the saying goes – goals change games, in Saturday’s 1-1 draw between Eastern Conference contenders Saint Louis FC and the Tampa Bay Rowdies, the two tallies saw the pendulum of momentum swing back and forth between the two clubs. STLFC held a 3-1 advantage in shots when Sam Fink put the hosts ahead after 26 minutes, but from that moment the Rowdies racked up a 9-3 advantage until Sebastian Guenzatti’s penalty kick leveled things with 14 minutes to go. Things then swung back in Saint Louis’ favor as the hosts held a 5-1 edge in shots over the remainder of the contest, leaving both sides with 11 shots total and three apiece on goal in a hard-fought draw.

9. Hartford Athletic may have suffered its third consecutive defeat to start the season on Saturday as it fell 2-1 to Louisville City FC, but the signs that this side is on the verge of putting together some positive results are starting to emerge. If not for a couple of good saves by LouCity goalkeeper Ben Lundt and a little better fortune on Nikolaj Lyngø’s incredible first-half shot off the crossbar, the visitors could have taken something from a game in which they outshot their hosts 20-18 overall.

Still, that’s not going to provide much comfort for Hartford Head Coach Jimmy Nielsen. “I don’t want to be the guy who is standing there happy with the performances because at the end of the day we are all getting evaluated by how many points we have on the damn account,” he said after Saturday’s game. “And we’re not there yet, but we are getting there. I guarantee you we are going in the right direction and I guarantee you that we will get there.”

10. Tulsa Roughnecks FC may not have been able to recover well enough from a flat first half to salvage anything from its midweek clash with New Mexico United, but the positive momentum it built over a second half that saw it log 14 shots certainly carried over to its return home on Saturday to Tacoma Defiance’s cost. A goal by Cyprian Hedrick eight minutes in – the 100th in the Championship this season – paved the way for a 4-0 victory, meaning Tulsa is now one win away from matching its total from a season ago.

11. Sometimes, the ball just seems to find people in the right place at the right time. That’s sure how it must be feeling for Roughnecks defender Luca Lobo, who is sitting at the top of the Golden Boot race with five tallies in the past three games. Lobo has quickly moved within reach of the most goals by a defender in a single season in the Championship era – Jordan Burt’s eight goals for Colorado Springs Switchbacks FC two seasons ago – and as devastating as Tulsa’s set pieces have been so far it seems Lobo will get his fair share of chances to top that.

12. The team the Roughnecks are looking to emulate in going from last in the West to the postseason the next year, the Portland Timbers 2, are already showing that 2018 was no fluke. A 3-1 win against Las Vegas Lights FC to continue their undefeated start to the season saw Foster Langsdorf and Marvin Loria continue to lead the way in attack for T2, even if Langsdorf probably shouldn’t be on penalty kick duty for a while after moving to 3 of 7 from the spot all-time after a first half miss.

13. The man who stole the show at T2’s home opener at Merlo Field – necessitated due to the current renovations going on at Providence Park – was Dairon Asprilla. The Colombian’s bicycle kick to ward off any hopes of a Lights FC comeback landed at the No. 3 slot on Saturday night’s SportsCenter Top 10 and got this piece of praise from the inestimable Mike Donovan.

Dairon Asprilla might have scored the best goal in both @TimbersFC and @TimbersFC2 history. #RCTID

If you know #StatMan Mike and his knowledge of Timbers history, you’ll know that opinion can probably be taken as fact.

14. Saturday night was one for great goals overall, including this thunderbolt by Romilio Hernandez for Rio Grande Valley FC against El Paso Locomotive FC.

That finish was remarkably the Toros’ first goal of the season and it sparked a dramatic late comeback for a 2-2 draw that denied Locomotive FC its first win in club history before a crowd of 7,458 fans at Southwest University Park. After seeing his side draw a blank the first two games of the season – including a missed penalty last weekend against Fresno FC – Head Coach Gerson Echeverry should be hopeful his side is now going to find its range in front of goal.

16. As great as the goal by the Honduran U-20 international was, the impact it could have on the Switchbacks’ season is even greater. Over the past couple of seasons, the Switchbacks’ luck has seemed to run out when it came to game-changing moments, which has been part of the reason why the side hasn’t reached the postseason since 2016. In nabbing a 1-0 win at the death this past week, it can go into a major test against Phoenix Rising FC next Saturday night with just that little bit more confidence.

17. As big a boost as Romero’s goal gave the Switchbacks, it came as a devastating blow for San Antonio FC, which now has one point from in its opening three games despite putting up a much more solid defensive effort than its prior outings. “We have to have a short-term memory and we need to learn and move on,” said SAFC defender Josh Yaro after the contest. “This match is over and now we'll look over the footage, figure out what we did well, what we didn't, and prepare for our next match on Saturday.” There’s still a very long way to go in the season, but that first trip to face Austin Bold FC next weekend is looking like a very big game indeed for both winless sides.

18. Finally, a big congratulations to the Charleston Battery’s Zeiko Lewis and Bermuda on earning their first trip to the Concacaf Gold Cup on Sunday evening thanks to a 3-1 victory against the Dominican Republic. Lewis scored the opening goal for the visitors after the Gombey Warriors had gone behind to a freaky early goal by its hosts, and second-half goals by Nahki Wells and Justin Donawa sent the side through. The Championship should be well-represented by current and former players at this summer’s tournament, but for Lewis and his teammates the event is going to be something a bit more special.