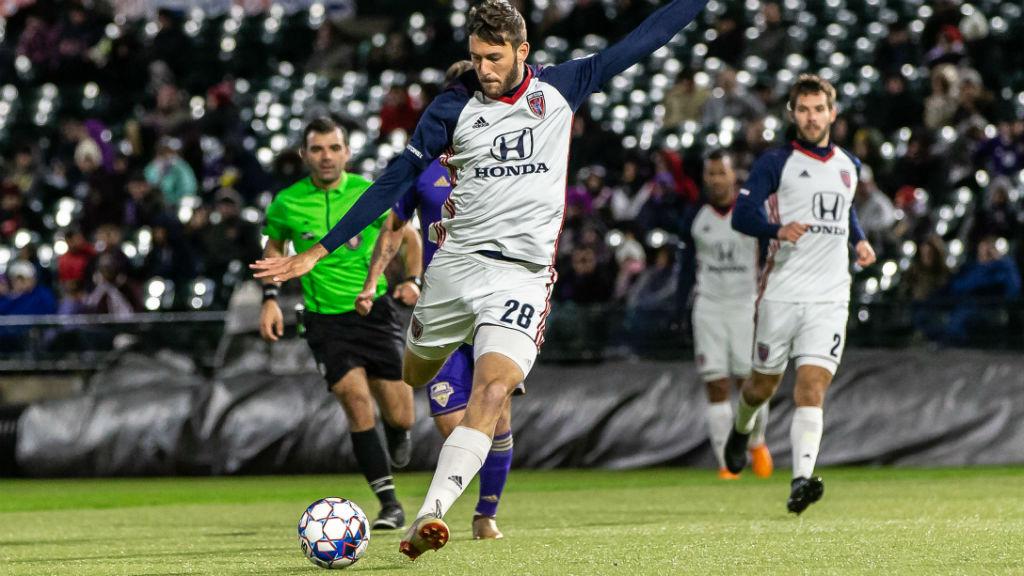 Elliot Collier scored one goal in 11 appearances for Indy Eleven in 2018 after joining the club on loan from the Chicago Fire last August. | Photo courtesy Matt Schlotzhauer / Louisville City FC

MEMPHIS, Tenn. – Memphis 901 FC added to its attack on Thursday as the club announced the acquisition of forward Elliot Collier on loan from Major League Soccer’s Chicago Fire, pending league and federation approval.

After being selected in the third round of the 2018 MLS SuperDraft by Chicago, the New Zealand native split his first professional season between the Fire and USL Championship side Indy Eleven. Collier recorded a goal and assist in 16 appearances for the Fire before linking up with the Eleven last August.

“We’re extremely pleased to have Elliot join our squad this season,” 901 FC head coach Tim Mulqueen said. “He’s an exceptional young forward with great technique, energy and a high soccer IQ. We expect him to add some versatility to our attack.”

Collier spent significant time with Memphis during the preseason, leading the club with four goals including a hat trick against the University of Memphis.

At the collegiate level, Collier was earned All-Missouri Valley Conference honors in each of his four seasons at Loyola University Chicago, where he notched 17 career goals.

“Anytime you can add quality players to your squad is very helpful, particularly at this stage of the preseason,” 901 FC Sporting Director Andrew Bell said. “Elliot is a very good young player and we’re excited to have him.”

Guerrero previously played in the Championship for North Carolina FC, making just one appearance for the side in 2018. The 29-year-old goalkeeper began his professional career with the Portland Timbers U-23s in 2009 and has also featured in Liga MX for Tigres, Altamira FC and Puebla FC. Guerrero played collegiately at the University of Portland, where he was a three-time All-WCC First Team selection and became Pilots’ all-time leader in saves with 346.

Yosimar Hernandez also joins Reno after a successful collegiate career, having recently finished his four-year spell at the University of California – Riverside. The 21-year-old defender also brings a bit of youth international experience to 1868 FC having been called up to the U.S. U-15 National team in 2011.

Apodaca joins the club from fellow USL Championship side Bethlehem Steel FC. The forward, who was selected with the 55th overall pick in the 2018 MLS SuperDraft by the Philadelphia Union, recorded two goals and two assists in 17 appearances for Steel FC in his rookie season. Apodoca played his college years at California Baptist University, where he tallied 48 goals and 12 assists for the Lancers in 68 appearances.

“It’s really good to get a young group with potential so we can see how they all grow and develop over the next couple of years,” Reno Head Coach Ian Russell said. “It’s also great to sign a couple of goalkeepers and really add to our goalkeeper depth.”

Tchilao joins Los Dos after a four-year career at Oregon State University, where he recorded 15 goals and 13 assists in 71 career appearances. In his senior season with the Beavers, he totaled seven goals and nine assists in 20 starts to earn First Team All-Pac-12 honors. The 22-year-old was selected by the LA Galaxy with the 36th overall pick in the 2019 MLS SuperDraft.

“Don has shown well for himself this preseason and we’re excited to sign him to LA Galaxy II,” said LA Galaxy General Manager Dennis te Kloese. “We think his attacking abilities and strong work ethic will make him a valuable addition to Los Dos.”

Born in Ormond Beach, Fla., Koreniuk played just one season of high-school soccer before joining Vitesse Arnhem’s Academy in the Netherlands. The 21-year-old midfielder worked his way up the ranks, scoring 10 goals in 19 games for Vitesse’s U-21’s in 2017. Internationally, Koreniuk has featured for the Netherlands at the U-16 and U-18 levels, as well as the U.S. U-17 Men’s National Team.

“Kai is an explosive attacker who has the ability to play both as a winger and forward,” said LA Galaxy General Manager Dennis te Kloese. “We are pleased to welcome Kai to Los Angeles and look forward to his development in our system.”

BATISTA JOINS RISING FC ON LOAN: Phoenix Rising FC bolstered its back line on Thursday as the club announced the acquisition of defender Lamar Batista on loan from MLS side Los Angeles FC, pending league and federation approval.

LAFC will retain the right to recall Batista at any point during the season.

The 20-year-old center back, who signed with LAFC in February, spent the past two seasons with fellow Western Conference foe Portland Timbers 2. The 6-foot-5 Batista appeared in 22 matches for Portland in 2018, helping the side reach the USL Cup Playoffs before falling to Phoenix in the opening round.

Following his rookie season with T2 in 2017, Batista was selected No. 8 on the Championship’s 20 Under 20 list after starting 19 games and recording a tackle success rate of 81 percent.

Rising FC also announced on Thursday that the club has mutually parted ways with midfielder Gladson Awako, who recorded two goals and five assists over two seasons in Phoenix.